Why people, not trees, are the key to rewilding success 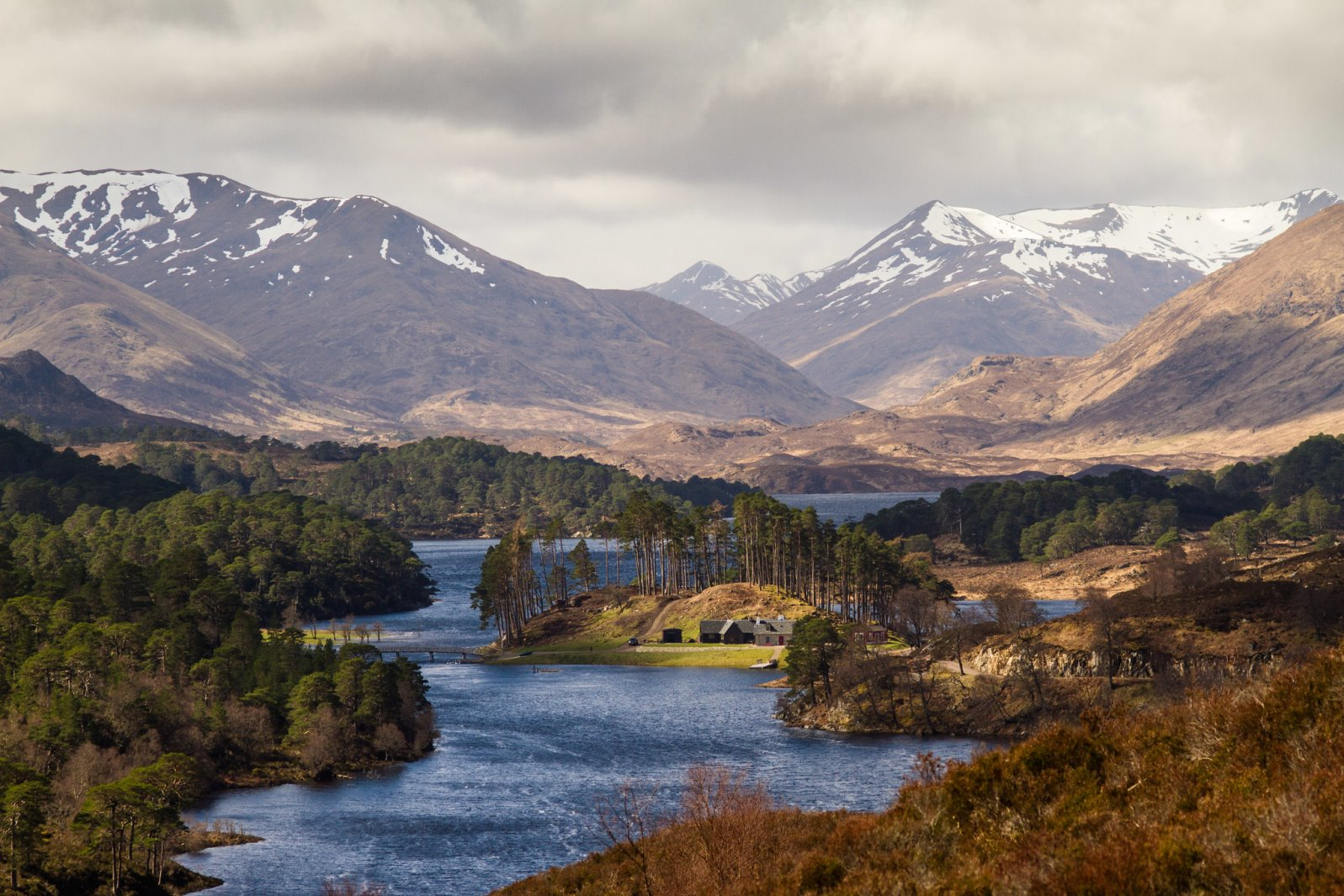 A hunter, conservationist, and psychologist are working on a rewilding project. It sounds like the start of a joke, though the antics of this unlikely trio have not ended in a punchline, but one of the U.K.’s largest land restoration projects.

They have been collaborating on the Affric Highlands scheme, which covers an array of woodlands, peatlands, montane, river, and coastal habitats between the west coast of Scotland and Loch Ness. The aim of the project, announced this week, is to rewild half a million acres (200,000 hectares) of land — by rewilding the people who live in it.

Conservation manager Alan McDonnell, who works for the rewilding charity Trees for Life, has been leading the project, formerly known as East West Wild. He has spent more than two years getting land managers, animal stalkers, millionaires, and farmhands to sit around a table and talk about getting wildlife back to the land. “We wanted to speak to as many people as possible before making it a public thing so that people didn’t feel as if they were pressured into being a part of it,” says McDonnell.

Rewilding is often perceived as trying to remove people — particularly farmers — from the land. In many rural communities, talking about rewilding gets a similar response to insulting someone’s mother. “For some people, just the Trees for Life badge, or the word ‘rewilding,’ means that’s it … I might be here talking to you, but we’re not actually having a conversation,” says McDonnell, who called in psychologist Paul Howell to help.

I meet Howell on Dundreggan estate, where work is underway to build a state-of-the-art rewilding centre with 40-bed accommodation, events spaces, classrooms, and a cafe.

Howell says conservationists and rewilders often think they can convert people to their view using a science-based approach, a “campaign and crusade kind of mentality.” This alienates people and makes them do the opposite of what you want, he says. “Science has information that is profoundly useful. But using that to kind of threaten people and bash them over the head isn’t going to get them where they want to go.

“If you are excluding people who you need to connect with and influence, then you’re in some kind of delusional bubble that you are right and they are wrong,” he says. “You don’t know enough about them. Until you’ve developed the maturity to listen to people — and genuinely listen, not listen until they stop talking so you can then tell them what to do — you’re just delusional.”

Howell says he didn’t want to be some “secret weapon” for McDonnell’s team. His client was Scottish wildlife, and if he could facilitate conversations that led to ecological restoration, that was “job done” for him. If rewilders are really aligned with the landscape, they will be looking at every possible opportunity to engage with the people entwined with it, Howell believes.

He told McDonnell that rather than seeing Trees for Life as an organization that can plant trees, it had to plant a vision for rewilding in communities. Talking about rewilding should be like “dating” in the sense that you approach someone with genuine curiosity and the desire to understand how they’re feeling and how they think, he says.

The aim of a project announced this week is to rewild 200,000 hectares of land in Scotland by rewilding the people who live in it. #rewilding #AffricHighlands #conservation #TreesforLife #LandRestoration

Howell welcomes conflict in meetings because it’s meaningful, fruitful, and makes things happen. When people are aggressive to McDonnell, Howell tells him to get their number and have a cup of tea with them, look around their farm and understand their point of view. “That’s a radically different attitude. I really believe it’s not passive, it demands more of an individual in terms of their creativity and maturity … it’s a true kind of authentic commitment to something larger than himself.

“I don’t think it’s rewilding in the way most people think about rewilding, I think it’s truly visionary,” says Howell, who is optimistic about how much this project will achieve. Already, McDonnell has about 25 per cent of the land being managed by people who have signed up to the Affric Highlands project and the hope is that more will join after its official launch. The U.K.’s largest restoration project is Cairngorms Connect, which covers 64,000 hectares (158,000 acres).

Later that day, I’m sitting in a house on a hill. It belongs to Pete Smith, a hunter who worked in oil for 40 years. McDonnell asked Smith to speak to the naturally skeptical hunting and fishing communities about how Affric Highlands could help them.

Smith has no interest in rewilding if it means fewer people. What he wants is these landscapes filled with young families, like they used to be. He was initially skeptical about rewilding but sees it as a levelling-up mechanism and a way to tackle rural poverty on a grand scale.

“The economic spinoffs from rewilding could be that we have far more people working in rural areas, living sustainable lives, the whole thing becomes a virtuous cycle,” he says. A recent report from Rewilding Britain found rewilding five per cent of England could create nearly 20,000 rural jobs, increasing employment by 50 per cent compared with intensive farming.

Smith also wants to be able to catch fish and deer that are healthy. “Conservation is a huge part of anybody who’s serious about fishing and shooting, or a deerstalker. There’s a huge amount of work that goes into that, and is pretty much unseen … If you’ve got to spend all day scraping around to catch one little fish, or a small skinny deer that you’re stalking, that’s not the best.”

Planting trees beside rivers creates a better habitat for young fish and a more nutrient-rich river that can support bigger fish, which would be better for angling businesses. People who want to shoot larger, healthier deer living in a more forested landscape should be supporting this project, Smith says.

There is no mention of reintroducing wolves and lynx because it creates unnecessary conflict and is a simplification of what rewilding is about. This project is about the land and maximizing the amount of nature it can support, with the creation of jobs, tourism, natural capital — and the ability to monetize that. It is also about improving the habitat of existing native species, including mountain hares, otters, osprey, and short-eared owls.

“You might look at those people and think they’re unlikely partners,” says McDonnell. “And we’re saying, despite that vague and unarticulated gap between us, there is actually energy there, and that’s something we could get out of that. There are a lot of ways we can use land better and increase what it can offer.”

Green initiatives are increasingly getting funding, and this is another way McDonnell is encouraging people to get involved. Those wishing to plant trees can get funding for carbon offsetting units, and if they plant trees on agricultural land, they get additional funding via the woodland carbon code. The Scottish government has a £250-million, 10-year package to fund peatland restoration, with the aim of restoring 250,000 hectares by 2030.

McDonnell wants to make people aware of the opportunities to attract funding, while also addressing the climate and nature emergencies. He thinks people working in tourism or selling produce could have an Affric Highlands logo to show they are part of the initiative.

Large rewilding projects have failed in the past because of a breakdown in communication between groups with different interests. Funders backing the £3.4-million Welsh Summit to Sea rewilding project withdrew because of insufficient focus on the interests of local people. Rewilding Britain then pulled out, saying there should have been better communication about it being “community-led and owned.”

Elsewhere, in Northumberland, efforts to reintroduce lynx have also stalled, with the National Farmers’ Union complaining that the concerns of farmers and local people were not taken into account. The government wildlife body, Natural England, says only plans that consider socioeconomic impacts will be approved.

Howell believes this restoration project will be different because it is working with communities in a profound way, not just to tick a box.

“Affric Highlands won’t be this big fuss with loads of money, and then you never hear about it again,” he says. “It will be a regenerative process that will start from communities.”

When it comes to the climate crisis, we can’t just assume everything will be fine