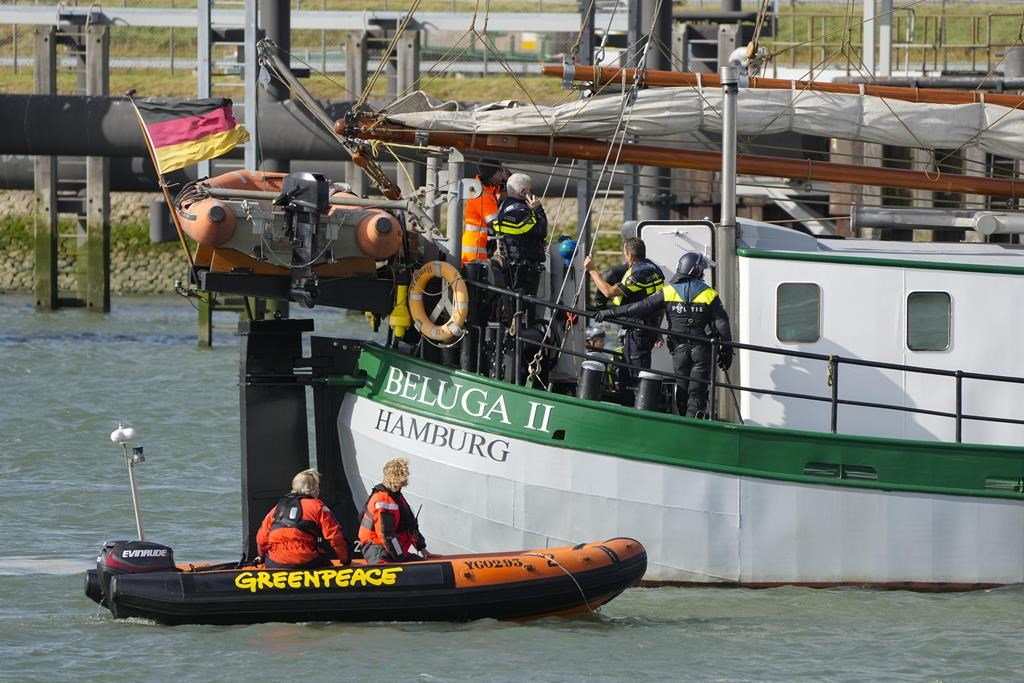 Dutch police took control of the Greenpeace's Beluga II as they broke up a protest by climate activists at a Shell refinery in Rotterdam, Netherlands, on Monday, Oct. 4, 2021. (AP Photo/Peter Dejong)
Previous story
Next story

A coalition of more than 20 environmental and climate groups launched a campaign Monday calling for a ban on fossil fuel advertising and sponsorship across the European Union, similar to bans on tobacco advertising.

More than 80 Greenpeace activists blocked the entrance to Shell's oil refinery in the Dutch port of Rotterdam to draw attention to the launch of the European Citizens' Initiative calling for the advertising ban.

The action comes less than a month before the start of the United Nations climate summit, COP26, in Glasgow. The 12-day summit aims to secure more ambitious commitments to limit global warming to well below 2 degrees Celsius, with a goal of keeping it to 1.5 degrees Celsius compared to pre-industrial levels.

“I grew up reading signs about how cigarettes kill you, but never saw similar warnings in petrol stations or fuel tanks. It’s frightening that my favorite sports and museums are sponsored by airlines and car companies," Chaja Merk, an activist on board the Greenpeace ship, said in a statement released by the group. “Fossil fuel adverts belong in a museum — not sponsoring them.”

Shell said the company is investing billions of dollars in “lower-carbon energy. To help alter the mix of energy Shell sells, we need to grow these new businesses rapidly. That means letting our customers know through advertising or social media what lower-carbon solutions we offer now or are developing, so they can switch when the time is right for them.”

Police moved in to break up the demonstration, boarding the Beluga II and detaining activists. More were detained at the oil tank. In total, 22 activists were arrested and a further 32 issued with fines, police said.

Shell said it respects the right to peaceful protest, “if it is done safely. That is not the case now. The demonstrators are illegally on our property, where strict safety protocols apply,” the company said.

Calls for fossil fuel advertising bans are gaining traction. Earlier this year, Amsterdam imposed a ban in the city's metro network on ads linked to what it called “fossil products” such as gas-powered cars and cheap airline tickets. The municipality called the move a first step in a wider move to remove such ads from the Dutch capital's streets.

The campaign for a law banning ads linked to fossil fuels across the EU needs to gather 1 million verified signatures in a year. If it succeeds, the EU's executive Commission has to look at the request, but is not obliged to take action.

“This legislation would increase public awareness of products and technologies that are responsible for climate change and other environmental and health harms,” the environmental coalition said on its website.

Coinciding with the launch, Greenpeace's Dutch branch published a report accusing major energy companies of large scale “greenwashing” in their advertising campaigns — defining the term as “as a combination of both fossil fuel companies’ advertisements promoting genuinely climate friendly initiatives, as well as their advertisements that promote false climate solutions as ‘green.'”

The study analyzed more than 3,000 ads on social media by six energy companies and concluded that 63% amounted to greenwashing.