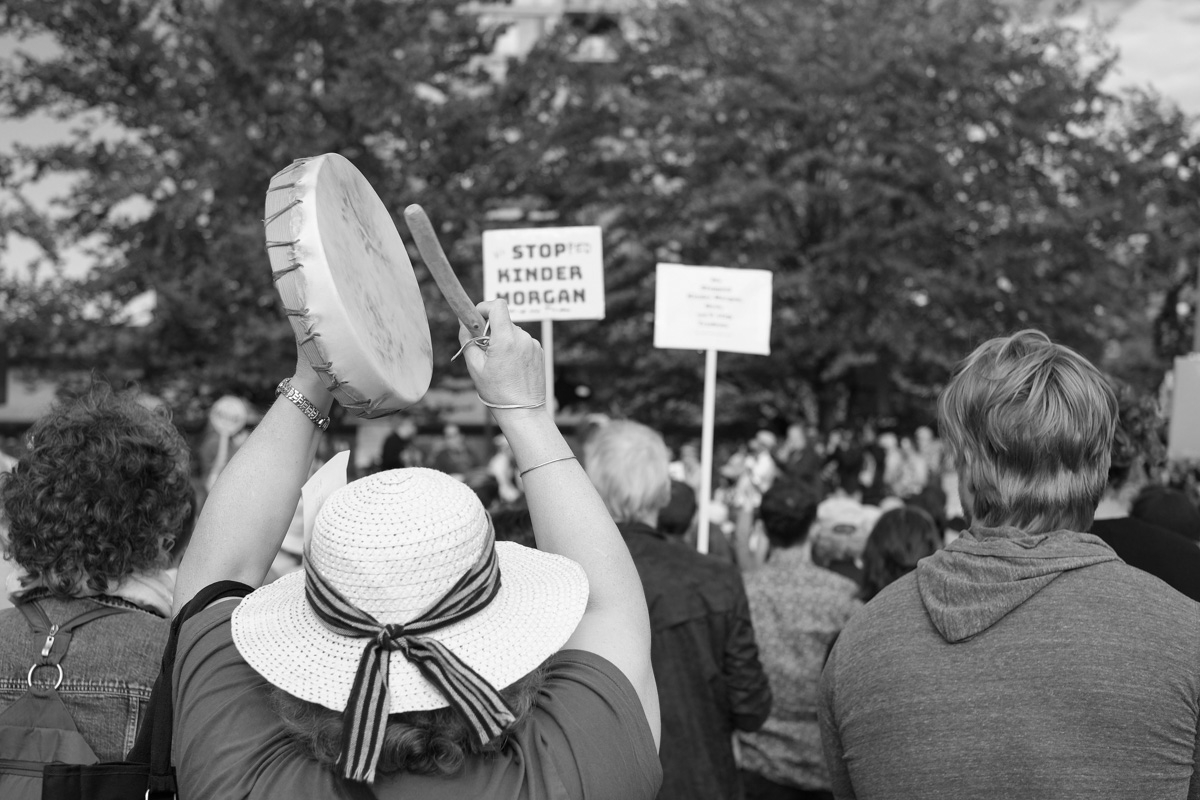 On Sept. 28, a court injunction in British Columbia was momentously struck down by a B.C. Supreme Court judge, when Justice Douglas Thompson ruled the Fairy Creek injunction — against protesters protecting old-growth forests — was bringing the court itself into disrepute. Yet in other B.C. courtrooms over recent months, denigration of Indigenous cultures and lives through injunctions has been on full display.

According to 2021 amendments to the Canadian Judicial Council’s Ethical Principles, judges are expected to be “alert to” and respectful of the histories and cultures of Indigenous peoples. This message seems to have been brushed aside in the B.C. Supreme Court in cases concerning the Trans Mountain pipeline expansion (TMX). As such, efforts are now being made to assemble resources for appealing recent rulings and ongoing proceedings relating to Indigenous land and water protectors on the territory of the Tsleil-Waututh Nation and on Secwepemc land.

While heavily impacted Indigenous Nations have been continuously opposing TMX on their never-surrendered lands, courts have been using “injunctions” — measures that purport to promote the integrity of the court itself — as tools for stopping protest, sidelining Indigenous jurisdiction, and subordinating all aspects of Indigenous culture to blatantly extractivist agendas, all the while in a code-red climate state of emergency.

As I write this on Sept. 29, Will George, a member of the Tsleil-Waututh Nation, is being prosecuted in a court presided by B.C. Supreme Court Justice Shelly Fitzpatrick. This same judge refused to take judicial notice in trials of other Indigenous elders that these pipeline-building activities occur on unceded Indigenous land, also making comments that many in the courtroom gallery felt were aggressively belittling Indigenous ceremony.

Using this same injunction, judicial violence against Indigenous land defenders was also vivid on June 7, when the same judge sentenced Indigenous elder Jim Leyden to 45 days in jail for a 20-minute Indigenous pipe ceremony in a crosswalk outside the TMX facility in Burnaby.

Leyden, a 68-year-old survivor of the Sixties Scoop — in which many children were forcibly taken from their families by the child welfare system — had been charged after TMX video surveillance showed him joining a group of people for a sacred (chanupa) pipe ceremony before peacefully leaving the area. No arrests occurred and police actually joined the ceremony, yet B.C.’s Crown prosecutors chose to work with TMX to prosecute and persecute Leyden nonetheless.

Despite medical conditions, in the midst of the COVID-19 pandemic, and the obvious desirability to avoid again forcibly taking this elder from his community, Justice Fitzpatrick's sentence rejected requests for considering house arrest.

She further prohibited him from coming within 500 metres of any TMX facility, including attending the Indigenous Watch House on Burnaby Mountain. Coast Salish communities traditionally build Watch Houses to protect communities and to watch for enemies or dangers. In addition to upholding spiritual responsibilities, which includes ensuring peaceful interactions, the community around the Watch House also uses photography to hold TMX accountable when it violates laws and regulations, as recorded on numerous occasions in recent months.

While the defence made clear Leyden holds a spiritual role at the Watch House, the judge dismissed his activities as an elder as “indulgences.” This word has long carried racist undertones, used by the colonizers to delegitimize cultural practices. People at the courthouse tried to process the disturbing words, which eerily echoed the language of Duncan Campbell Scott, one of the most infamous proponents of the residential school system. A few years ago, a 1921 letter went viral online, in which, writing as deputy superintendent of the Department of Indian Affairs, Scott instructed department staff to “dissuade the Indians from the excessive indulgence in the practice of dancing.”

Canadian laws require judges to consider alternatives to incarceration in these circumstances, and directives in recent months indeed encourage such alternatives, particularly for non-violent crimes during the COVID pandemic.

The judge, however, made clear she wanted to send a message to people across B.C. — and, in a conspicuously insensitive manner, actually singled out those from the Kamloops region in the same week that mass graves of residential school children were uncovered in Kamloops — that increasingly severe jail penalties will come to them if they attempt to interfere with pipeline expansion.

Since March 2018, more than 200 people have been arrested for breaching the TMX injunction, with the explicit targeting of Indigenous people by the RCMP and Crown prosecutors, even amid the increased awareness of institutionalized police racism and anti-Indigenous violence in Canada.

Opinion: While heavily impacted #FirstNations have been continuously opposing TMX on their never-surrendered lands, courts have been using “injunctions” as tools for stopping protests, writes @SamuelJSpiegel #FairyCreek #TRC #cdnpoli #bcpoli

Judges have discretionary and inherent jurisdiction that can be used to heal or further harm Indigenous peoples. Yet, as Leyden told the court, “In this trial, as in earlier ones, I saw no meaningful effort to understand the Indigenous issues underlying my actions or defence … I prayed that this court could see past the inherent racism, which is intertwined with the targeted, selective arrest and prosecution I faced for conducting my chanupa ceremony and fulfilling my role as a traditional watchman.”

More broadly, critical conversations are now needed on how to halt judges from using and abusing injunctions to sideline and disrespect Indigenous laws, traditions, and cultures.

Samuel J. Spiegel grew up in Winnipeg and is a faculty member at the University of Edinburgh, where he teaches on displacement and injustice.

is there no way to bring a

is there no way to bring a review of the judge's actions as in contravention of stated provincial goals such as to implement UNDRIP?
seems to be quite a weight of evidence building that she is not impartial or discharging her duites of care to First Nations??
# AG of BC

I suspect there is not

I suspect there is not because UNDRIP is, at best, a guideline or statement of intent which hasn’t been integrated into Canadian Common Law.

If I recall correctly, the SCoC has ruled that the disposition of resources on territory claimed by both the Crown and a First Nation—that is, there being, as yet, no treaty between the two—is required to observe “meaningful consultation”—“meaningful” meaning there must be substantive compensation to the one claimant if the other depletes jointly-claimed resources interim to a treaty settlement in accordance with the Constitution (of which the Royal Proclamation 1763 is an integral part).

That could take one or some of many forms determined by negotiation. And that’s a lot different than the “consent” rule in UNDRIP because the Crown, under meaningful consultation, can proceed with the disposition of resources if deemed in the greater public’s interest. But, like any other expropriation, there must be negotiated terms, namely compensation for the values depleted. The feature which distinguishes ordinary expropriation—which is well-tested in law—is Aboriginal Title as outline in the 2014 SCoC William decision —which has not been tested in law.

The Crown is notorious for blatantly ignoring SCoC rulings. The Wet’suwet’en standoff was a classic example: since Delgamuukw and William (“Tsilhqot’in”), it is obliged to consult meaningfully with that claimant (there is no treaty there) but instead put two proxies in, one of which was the Band Council supposed (by the Crown) to represent the Wet’suwet’en, but which is in conflict because it is, in effect, an agency of the federal Indian Act and paid by the Crown; second, the private gas-line company was substituted for the Crown which is inappropriate because it doesn’t answer to the citizenry to whom the Crown is responsible through parliament. It was a sort of ‘double conflict’ that eventually forced the Crown to recognize the real representatives Wet’suwet’en people want, and to negotiate directly itself instead of sending a vested interest unaccountable to citizens and their parliament in its place.

Canadian Common Law and SCoC decisions are clear and can work. But the Crown always games the system to the disadvantage of the other claimant. The Wet’suwet’en—or anybody else, for that matter—can take the Crown to court over this, but its a long, expensive way to get anything done.

Integrating UNDRIP into Canadian Common Law —which is bound to follow the Constitution, not a UN declaration—will surely take a very long time at this rate and with these Crown governments. The judge you want reviewed will be retired and pushing up daisies long before the law wends its way through this intentional quagmire.

While I wouldn't be surprised

While I wouldn't be surprised if the judge is in some manner racist, ultimately the agenda isn't a racist agenda, it's a CAPITALIST agenda. Capitalism doesn't respect ANYONE's culture if that culture gets in the way of making money--to the contrary, it tends to systematically break down culture, or at best turn it into a theme park to attract tourists. Although racism, as we know it, itself seems to have originated as a tool to make it easier to make money--to make it OK to kill natives and take their land, to make it OK to enslave blacks, to make it harder for oppressed whites to team up with "other" "races" against the rich.

This article misses the point

This article misses the point. The Fairy Creek injunction was refused so that the judge could make a point about the RCMP's enforcement methods. In no way did it imply that the court or the RCMP had any reduced authority to make injunctions or otherwise enforce laws made by British Columbia's Legislature. in Fairy Creek or elsewhere.

It is inappropriate to call

It is inappropriate to call the judge a “colonizer”. We’re talkin’ law here, and, in law, there is no colony or colonial authority here. Each province was decolonized when it confederated with Canada—except Alberta and Saskatchewan which were Royal (commercial) Charters before they confederated in 1905. The Territories were decolonized when they were ceded by UK to Canada in 1931.

Yes, “decolonization” has become a slogan, but that’s a Gaelic word for ‘war-cry’ that’s hardly compatible with Reconciliation. Further, many of these matters are fully in the legal realm, not political (we’re not ever going to vote on whether the Aboriginal Rights and the Constitution are in force or not), meaning the language must be strictly literal—and there’s good reason for that in this case: colonialism and decolonization are germane to issues at hand, namely the review and potential renegotiation of bad-faith treaties. In the matter of remedy, it makes a difference if a treaty was made before or after actual decolonization; some treaties were made by colonial governments and adopted in Terms of Union with Canada; some of these were war indemnities to allies of the colonial Crown during hostilities with the USA. And of course there are treaties the Crown is obliged to settle but hasn’t yet. No judge or officers of a court or negotiators of any treaty or review will accept “colonization” the way it’s used as slogan these days. It’s also unhelpful to bandy the slogan about until it becomes even less meaningful than it already is.

Preferable is less-euphemistic language—like, ‘grievous breach of duty and trust on the Crown’s part’. Perhaps there’s a shorter way of saying that, like: ‘government criminality’ or something. But “colonizer” and “decolonization ”, the way they’re used these days, ain’t it. The constant misuse of the slogan risks souring the remarkable amount of good will Canadians have for the reconciliation process. Certainly calling a judge whose decision or legalese you don’t like names like “colonizer” is inappropriate; you’re free to criticize decisions and explain why; and decisions can always be appealed—and you can support that. But name calling?...

Just hang it up, okay?