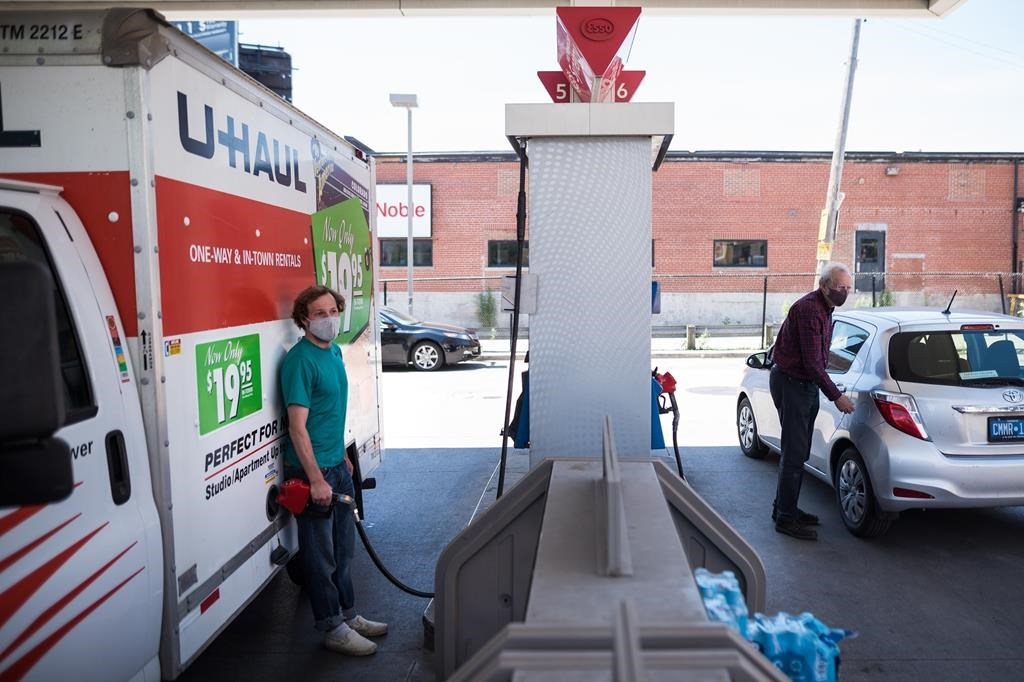 People pump gas into their vehicles at a Esso gas station in Toronto on Tuesday, June 15, 2021. File photo by The Canadian Press/Tijana Martin
Previous story

Pandemic lockdowns that left Canadian cars sitting idle in driveways and garages for weeks on end last year pushed gasoline use to its lowest level in two decades.

But environmental experts say the resulting drop in greenhouse gas emissions will not be permanent.

Statistics Canada data show Canadians bought 38.6 billion litres of gas in 2020, 14 per cent less than the year before. Diesel use also fell nine per cent, to the lowest amount since 2009.

More cars on the road and a growing preference for bigger trucks and SUVs with bigger engines and gas tanks pushed gas use in Canada up more than 16 per cent from the late '80s until 2000, and then another 17 per cent between 2000 and 2015.

Starting in 2015, sales started to flatline, a turn of events Statistics Canada's report attributes to more fuel efficient vehicles, and the slow but noticeable arrival of hybrids and electric cars.

Then in 2020 sales fell off a cliff, and not because Canadians voluntarily hung up their car keys for public transit, or suddenly turned to electric cars in droves.

Every province saw gas sales fall, but Ontario, where lockdowns lasted the longest, saw the biggest decline at 18 per cent. Newfoundland and Labrador had the smallest decline at seven per cent.

Statistics Canada also noted people took fewer road trips in the summer of 2020, with domestic trips down 10 per cent and trips to the U.S., mostly prevented because the border was closed, fell 96 per cent.

A reduction of six billion litres of gasoline and 1.6 billion litres of diesel, translated into greenhouse gas emissions, would cut Canada's carbon output about 2.5 per cent, or the amount produced by about four million passenger vehicles over the course of a year.

"Without structural changes that address how Canadians move around, it's unlikely that emissions reductions that could have occurred during the pandemic will be permanent," she said.

Emissions from road transportation grew 18 per cent between 2005 and 2019, and account for one-fifth of total emissions.

She said getting transportation to zero emissions is going to require rethinking how communities are designed so active and public transportation options are more attractive, as well as stronger policies to encourage the uptake of electric vehicles.

Bora Plumptre, a senior analyst at the Pembina Institute, said the emissions cut during the pandemic "are not nothing" but in the grand scheme of climate change the impact will be negligible because the cuts will not be sustained.

Canadians won't know for another 18 months what the pandemic's overall effect on emissions will be in 2020, because the data is always two years behind.

A study in the journal Nature Climate Change last March suggested globally emissions fell about seven per cent in 2020, almost entirely because of pandemic-imposed restrictions.

How SUVs won the pandemic