Conservative MPs vote to give themselves power to oust O'Toole 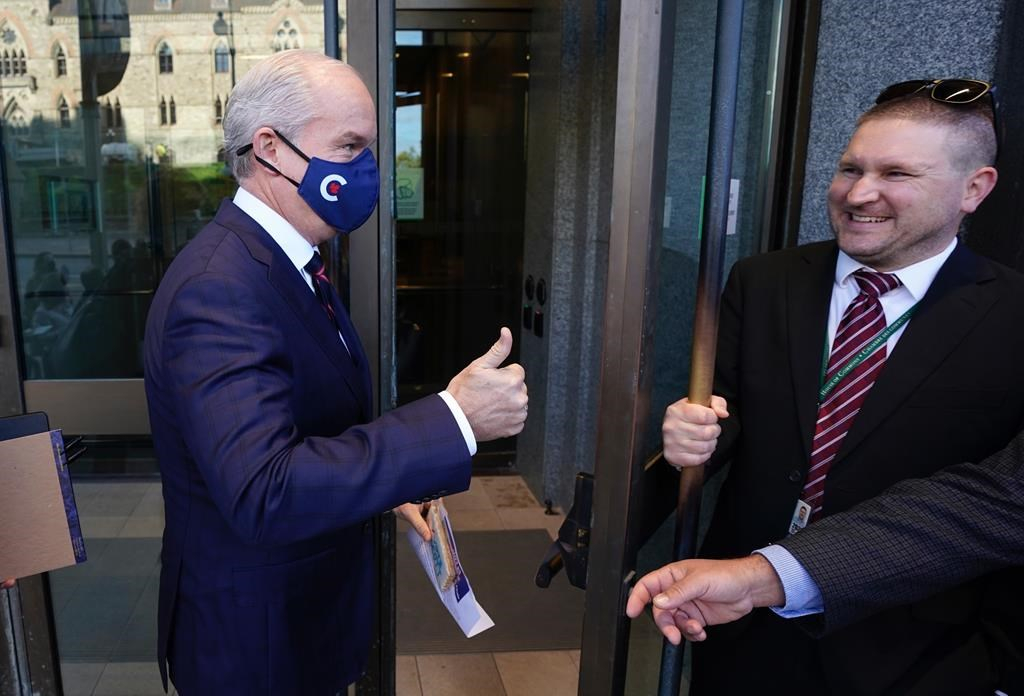 Conservative Leader Erin O’Toole gives a thumbs up as he enters the building for the first Conservative caucus since the federal election, on Tuesday, Oct.5, 2021 in Ottawa. Photo by The Canadian Press/Adrian Wyld
Previous story
Next story

Conservative Leader Erin O'Toole says he's confident his 118 elected MPs have his back, despite voting to give themselves the power to review his leadership and potentially give him the boot.

Conservative MPs gathered Tuesday for the first time in person since the party's election defeat two weeks ago that saw them win two fewer seats than under former leader Andrew Scheer.

The party suffered losses of incumbent MPs — including five elected people of colour — and failed to make crucial gains needed in the Greater Toronto Area, Quebec and Metro Vancouver.

Despite that, O'Toole has spent the time since the election highlighting the positives, including how the party increased its share of the vote in Ontario and won new seats in Atlantic Canada.

Conservative MPs met for roughly six hours Tuesday and during that time voted for a provision that gives them the power to trigger a review of O’Toole’s leadership.

"This is not about a sword of Damocles hanging over my head," O'Toole told reporters after the meeting.

"We're united as a team. This is about having a fair and transparent process that a team must have when it respects one another."

Under the Reform Act passed in 2015, each party's caucus is required to decide after an election whether it wants to empower its members to trigger a leadership review.

For a leadership review to happen, an MP must submit a written notice to the national caucus chair, which has to be signed by at least 20 per cent of the party's elected members. A vote would then be held by secret ballot.

O'Toole said he's always been a supporter of the Reform Act measures, which also empower MPs to elect their own caucus chair and decide whether to expel or admit MPs.

He said he encouraged elected members to vote in favour of all of the provisions, but he didn't directly say whether he would ask the party's grassroots to vote on his leadership in the next six months.

Re-elected Alberta MP Shannon Stubbs believes members should be able to have a say about O'Toole's leadership within the next six months instead of having to wait two years for a scheduled review in 2023.

Many of the MPs who attended the caucus meeting voiced their support for O'Toole remaining on as leader. Among them was Leslyn Lewis, a former leadership rival and favourite among the party's social conservative voting base, as well as Pierre Poilievre, who answered "no" when asked whether he had any leadership ambitions.

Poilievre briefly mounted a leadership campaign in 2020, but never formally entered the race.

Stubbs was the most publicly critical of the Conservatives' election performance, saying she lost a 15-percentage-point share of the vote in her riding — still winning with more than 60 per cent support —and wants to see O'Toole outline a plan to win back Conservative supporters who disagreed with the direction he's taken the party.

O'Toole promised billions in spending during the campaign and caused some confusion when he added a footnote to his platform promise to repeal a Liberal ban on some 1,500 types of firearms. His footnote stated the ban would remain in place pending a review.

Overall, he tried to pitch Conservatives as appearing more centrist and progressive on social issues, despite running as a "true blue" Tory to win over the base during last year's leadership race.

Stubbs said before the meeting she wanted to hear from O'Toole on how he would "maintain confidence among Conservative voters" and what he meant on election night when he said the party needs to have the confidence to change.

"If now what we're talking about is changes of our policies, our values, our principles, then for me, that means it's even more important for the members to be able to have a direct say," she said.

He promised it would be a "360" review, involving caucus, national council, the Conservative party and its fundraising arm to ensure a thorough probe of where the party fell short, as well as what it did right, so that it can win an election that O'Toole predicted could arrive in the next 18 months under the current minority Parliament.

Ontario MP Michael Barrett, who served as one of O'Toole's critics in the last Parliament, said caucus also heard from the national campaign manager and there were some "mixed emotions" in the room.

Eric Duncan, a fellow MP from Ontario, described the discussions as being "constructive" and "productive."

The mood of Tuesday's meeting differed greatly from when caucus gathered after losing under Scheer, according to one MP.

"In 2019, it was a lot more aggressive, there was a lot more anger. As of now, there was disappointment, we were defeated, but at the same time, we're looking forward and striving to change what we need to change," Pierre Paul-Hus, a Quebec MP, said in French.

O'Toole said he accepts responsibility for the election outcome, noting he had a plan to win the confidence of Canadians and "we fell short."

But he added he believes the simple reason for the loss was Prime Minister Justin Trudeau using the COVID-19 pandemic as a way to "divide Canadians."