Movies: the big winner from Cannes, and more from VIFF, including our Oscars hopeful 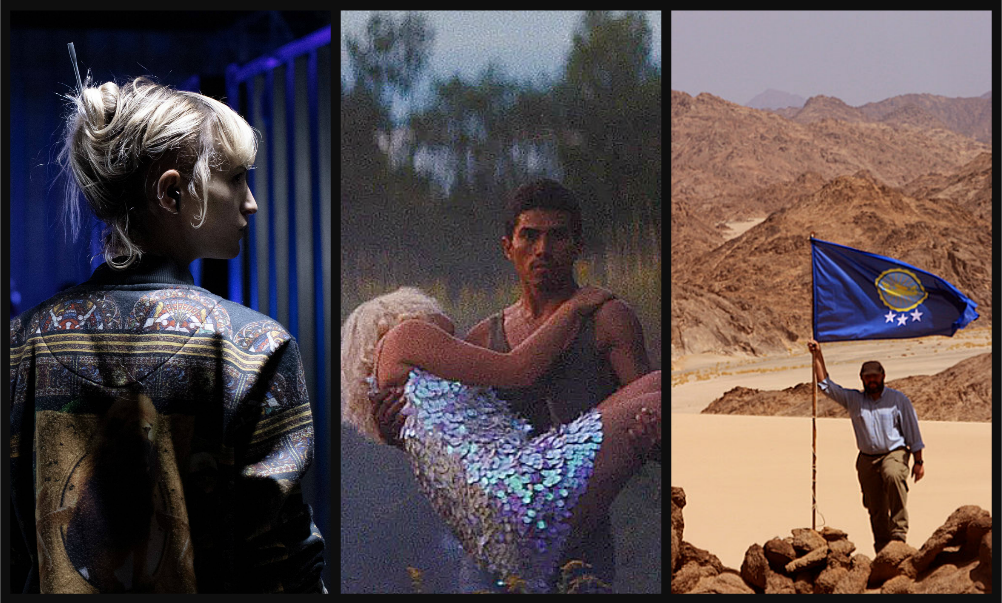 Also: the forgotten Chinese men on the Titanic, record collectors, and a self-made king.
Previous story

This is an extra column to look at a few more offerings from the Vancouver International Film Festival. One is Canada's submission to the Academy Awards. I'll have more on Friday. And notice VIFF has added a film: The Power of the Dog by Jane Campion and starring Benedict Cumberbatch. It's his second in the festival.

A separate film I write about today was the big winner at Cannes this year. It's notorious.

The King of North Sudan: 3½

TITANE: The big winner at Cannes this year arrived here Friday with no fanfare that I detected, and across North America, scored the biggest box office for a Palme d’Or winner in 17 years. So there's every reason to see it, right? Well, be careful. This film by Julia Ducournau from France works very hard to shock. The result is that it toggles between unpleasant and fascinating. You better be strong to take some of this. Attempted self-administered abortion, exuding black liquid that looks like dirty motor oil. A man injecting his behind with a hypodermic is mild by comparison. Up close and graphic, though.

Remember the early word? That this was about a woman having sex with a car? That happens, briefly. But most of the movie is about the aftermath of an earlier car incident: an accident that resulted in a young girl getting a plate in her head and living with the results as an adult. She (Agathe Rousselle) now works as sort of a stripper at hot rod shows and becomes a serial killer of guys who come on too strong. She then hides a pregnant belly and pretends she's a man, the adult version of a long-missing boy. Respected actor Vincent Lindon plays his father and doesn't seem to see through the deception. The story is crazy, but the film is very well-made and even touching. Still, heed the warning. (5th Avenue.) 2½ out of 5

DRUNKEN BIRDS: I have no idea what the title refers to. It may be an idiom I'm not aware of in Mexico or Quebec, where the story is set, or in the background of director and co-writer Ivan Grbovic, from Montreal but of Serbian extraction. Some of the people in his film may qualify with their reckless behaviour. The passions they inflame and the beauty of the acting and cinematography have just gained the film Canada's nod to send to the Academy Awards.

The story is too conveniently plotted, though. In Mexico, Willy (Jorge Antonio Guerrero) is in love with a drug cartel leader's wife. She (Yoshira Escárrega) decides to run away. He goes looking for her, with only one clue, a necklace manufactured in Montreal. He takes a job as a farm labourer to get there, but finds himself tangled up in the messy lives of the host family. The father (Claude Legault) is a tough but fair boss. His wife (Hélène Florent) had an affair with a worker the previous year and is attracted to Willy. Their daughter is angry at her for harming the family. When she goes out partying and comes back bruised, Willy is blamed. He speaks Spanish; the family doesn't. The language gap can't prevent the boil-over of tensions. As a plotline, it's not deep, but it'll keep you interested. (In-theatre Thursday and Saturday, and streaming every day at VIFF Connect.) 3 out of 5

THE SIX: We all know the story of the Titanic which sank 110 years ago. Well, not all of it. Not about the eight Chinese men aboard, six of whom survived, none of whom have gotten the attention that just about every other passenger and crew member has had. This documentary corrects that and proves to be an engrossing exercise in research. It's like genealogy; finding lists, following trails, and sometimes guessing to get to the next step.

There are several problems, though. Some names were incorrectly listed. At least one was changed because of a legal technicality. The researchers had to rely on descendants who can recall what their grandfathers told them. Some of the survivors never talked about it.

The team assembled by director Arthur Jones and Steven Schwankert, and backed by James Cameron, a Titanic obsessive after his hit film, spent years following the clues. They travelled to China, England, and even to Canada (Saskatchewan and Toronto) to find the information. In one case, they connected the grandson of one man with the grandson of the man who rescued him. So there's drama, too, and it's blended with a robust history of anti-Chinese immigration and exclusion laws. (In-theatre one more time next Friday, and streaming now at VIFF Connect.) 4 out of 5

THE KING OF NORTH SUDAN: It doesn't exist under that name, and he was never a king, but the story is real, bizarre, and quaintly comic. That adds up to enjoyable. The place is Bir Tawil, a small piece of desert land in Africa about the size of the state of Delaware. It's between Egypt and Sudan, but because of map revisions by the British 120 years ago, it is not part of either country or claimed by them. Various outsiders have tried to claim it, but all failed. In comes a dreamer (and some-time truck driver) from the U.S., Jeremiah Heaton of Virginia, who got farther than most.

He planted a flag there, set out to establish a kingdom so that his daughter could be a princess, and gained lots of media attention on American talk and news shows. He then developed a vision of desert science and agriculture, food production, and mining. All he needed was support and money. He tried the U.S. State Department and Trump's man Michael Flynn. He went to Beijing hoping to tap into China's African ambitions. Then to Thailand, where a major hedge fund showed interest, though mostly it seems in the prospect of creating another tax haven. Or a country that can issue passports to sell to gullible Chinese. He has lost faith in the American Dream. “The deck is stacked against ordinary people,” he says, but he's not out. Danny Abel's documentary finds an upside. (VIFF Connect.) 3½ out of 5

RECORDS: As a record collector, I'm immediately attracted to this film. Plus, it's good to hear director Alan Zweig say that he's not repeating the focus he had when he first studied the subject in his film Vinyl 21 years ago. He painted record collectors as compulsives and their hobby “fetishism.” This time, he says, his attitude is “acceptance.”

He's got people who are articulate about why they collect. “These are artifacts,” one says. The thrill of finding something worthwhile drives others. The music is actually important, too, although one collector plays a talk-only record from a personal growth guru. There's also one with a cooking lesson. And sure the more normal are there, like the Swinging Blue Jeans (“better than the Beatles”), obscure Toronto bands, and one man's comprehensive collection of LPs by Heino. A woman regrets selling off her Incredible String Band and Phil Ochs records. Some couples merge their personal collections. Some don't. One man has over 30,000 records, but as another says: “You can't have too many records unless you have too many records.” (Screens Thursday and the following Sunday and streams any day at VIFF Connect.) 4 out of 5

AZOR: The title is a piece of Argentinian jargon meaning, “Keep quiet. Don't say anything.” That fits the tone perfectly in this latest political mystery about the years when the far-right military ruled there. We're drawn into intrigue worthy of a good spy novel, but this time, it's through the work of money men. A private banker (played solidly by Fabrizio Rongione) travels from the home office in Geneva to Buenos Aires after his co-owner partner disappeared without a trace. He embarks on a slow, methodical search for him and along the way uncovers a great deal of dodgy information.

People say he was a demanding boss to work for and may have been involved in dangerous matters. But was he supporting the junta or defying it? A note he left behind reads, “fear makes you mediocre.” The word Lazaro was on his calendar the day he disappeared. Who or what is that? The film pulls us along to find out and at the same time blasts the politics of the time. A top-level priest says the junta was doing the necessary work of fixing the country and re-educating the young people. The film, directed by Andreas Fontana and getting a Canadian premiere here, shows otherwise. (Screening once more next Friday and streaming any time at VIFF Connect.) 3½ out of 5