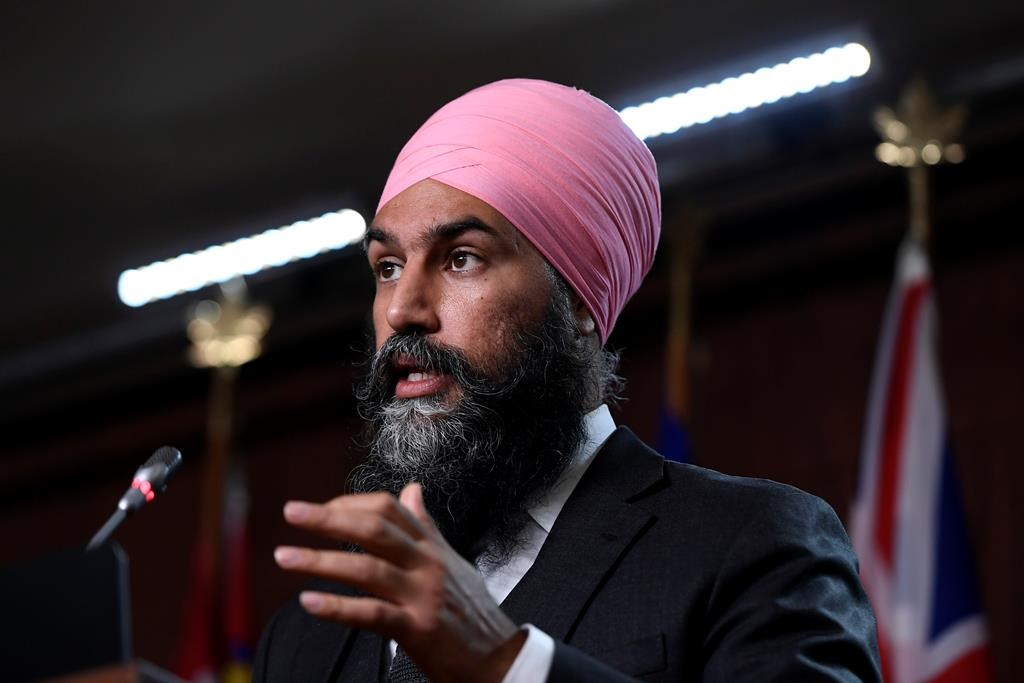 NDP Leader Jagmeet Singh speaks during a news conference after the party's first caucus meeting of the 44th Parliament, on Parliament Hill in Ottawa, on Thursday, Oct. 7, 2021. Photo by The Canadian Press/Justin Tang
Previous story

Jagmeet Singh warned Thursday that he is willing to "withhold votes" for Liberal legislation he does not agree with, including the budget.

The NDP leader signalled a tougher stance on co-operation with the Liberals in Parliament, stating that he will "not take pretty or nice words for granted" from Prime Minister Justin Trudeau.

Singh said promises from Trudeau would not be enough to win NDP support in Parliament. The price would be "concrete action" on NDP priorities, such as extending COVID-19 benefits that are set to expire this month.

At a news conference in Ottawa, Singh said he wants to see a "positive signal" from Trudeau that he is willing to work with the NDP.

He revealed that Trudeau had not yet picked up the phone to discuss co-operating in Parliament on policies they agree on, or to negotiate.

"They haven’t reached out and they haven’t signalled they want to negotiate or talk so far — that’s fine," Singh said. "I am not concerned because they know where we stand."

As in the last Parliament, Trudeau's minority government will rely on votes from other parties to push his legislative program forward.

Singh made clear that Trudeau could not take NDP support for granted.

"We are prepared to withhold our votes and that is why we are calling on the government to show that they are interested in working together," he said.

The “concrete action” Singh is demanding includes guaranteed paid sick leave for workers and a halt to clawbacks of financial supports for low-income pensioners who collected pandemic benefits. Ensuring Indigenous communities have clean, safe drinking water is another priority.

NDP prepared to withhold votes in Parliament, including on the Liberal budget: Singh. #CDNPOli #NDP

"I look forward to them signalling their interest (in working together) by doing any of these things we have talked about,” he said.

The NDP leader said he is "very skeptical of the words and the promises of Mr. Trudeau and the Liberals. Because they don’t follow through.”

Promises made by Trudeau in the past, such as on pharmacare, had not materialized into policies, Singh said.

However, the NDP leader added that if he sees evidence from the Liberals that "they are really interested in working for people" they could "count on my support."

"We withheld our votes in the past and we are prepared to do that again," he warned.

On Wednesday, Singh met with the members of the NDP caucus for the first time since the election. The NDP returned 25 MPs to Parliament — only one more than at the last election, despite spending $25 million on their campaign.

Singh said that a review would look at whether the party should have campaigned harder on the ground. It will also look at whether Singh's tour of the country, which saw him visiting more than 50 target ridings, paid off.

Singh said he was "proud" of the overall campaign, but "disappointed" that so many NDP candidates had narrowly missed out on a seat in Ottawa. In around 12 ridings he said the NDP came within one or two per cent of winning.

Melanie Richer, NDP director of communications, confirmed that the review, headed by veteran party strategist Bob Dewar, would also examine why the party had not broken through in key targets in Toronto or Quebec.

The NDP announced Thursday that its caucus had elected MPs to fill key jobs, including Vancouver MP Jenny Kwan who will serve as caucus chair and Blake Desjarlais, a two-spirit Métis leader newly elected in Edmonton, as deputy caucus chair.

“I’m very proud of our team and I know that these MPs are going to work hard to ensure people have a voice they can count on Ottawa,” said Singh in a written statement.

“I will be relying on the MPs in these important leadership roles as New Democrats work to deliver for Canadians in this minority parliament.”

Electoral reform ( proportional representation) ought to be the NDP’s top priority as it is key to ending the ongoing shenanigans of the two old parties. Making every vote count would reflect the wishes of all the electorate instead of the farce produced by the First Past the Post system designed for a two-party race. Meaningful cooperation on the important issues of the day cannot be expected to happen without it. Surveys continually show that the priorities of the majority of Canadians are pushed aside by the two old parties to appease their corporate masters. The NDP could do worse than to defeat the Government if it refuses to bring in PR (via a Citizens Assembly) and, thereby, make it the next election’s key issue.