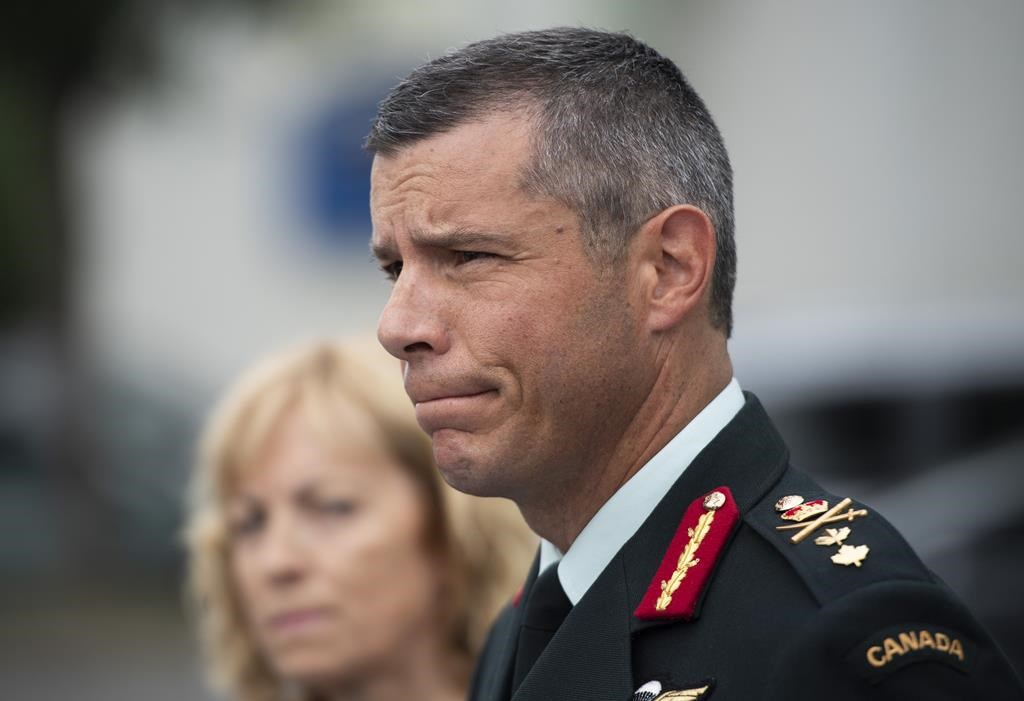 Maj.-Gen. Dany Fortin speaks to reporters outside the Gatineau Police Station after being processed, in Gatineau, Que., on August 18, 2021. File photo by The Canadian Press/Justin Tang
Previous story
Next story

A Federal Court judge has struck down Maj.-Gen. Dany Fortin’s request for reinstatement as the head of Canada’s COVID-19 vaccine distribution campaign after he was abruptly removed from the high-profile position in May.

In rendering her decision, Justice Ann Marie McDonald sided with the government’s view that if Fortin was unhappy with the decision, he should have filed a formal complaint through the military’s grievance system before resorting to the courts.

“In sum, Maj.-Gen. Fortin has not demonstrated that the decision to remove him from his (Public Health Agency of Canada) position cannot be redressed through the CAF grievance process,” McDonald wrote in the decision released Tuesday.

“Therefore, he must avail himself of the grievance process before proceeding on judicial review.”

Fortin was abruptly removed as head of the COVID-19 vaccine rollout effort in May, five days before military police announced they had referred an investigation of alleged sexual misconduct to Quebec’s prosecution service.

The senior military officer, who previously served in Afghanistan and commanded a NATO training mission in Iraq before being assigned last November to lead the federal government’s vaccine rollout effort, was formally charged with one count of sexual assault in August.

That case, which relates to an alleged incident dating back to 1988, is due back in a Quebec court on Nov. 5.

Fortin has maintained his innocence and in challenging his removal in Federal Court, accused Prime Minister Justin Trudeau and other senior members of the Liberal government of having turfed him from the vaccine campaign for purely political reasons.

During two days of court hearings last month, Fortin’s legal team argued that the military’s grievance system was the wrong venue for deciding whether his removal was appropriate or not given the political nature of the decision.

His lawyers also raised concerns about the military grievance system, citing a recent review by retired Supreme Court justice Morris Fish that found long delays and ultimately described the entire system as “broken” and in need of urgent reforms.

But McDonald rejected those arguments, writing: “In my view, the high-profile nature of Maj.-Gen. Fortin’s position and the allegations of political interference are not exceptional circumstances that allow him to bypass the internal grievance process.”

As for concerns about the grievance system, McDonald noted acting defence chief Gen. Wayne Eyre has instituted new orders to address the problems identified in Fish’s report, adding any concerns about unnecessary delays were “purely speculative.”

Fortin’s lawyer Natalia Rodriguez expressed disappointment with the ruling, including the fact McDonald declined to rule on whether the senior military officer’s removal was appropriate or not.

“We are reviewing the decision with Maj.-Gen. Fortin to determine next steps,” Rodriguez said in an email.

“Our position continues to be that the military grievance process cannot quash a decision made outside of the military chain of command and that it lacks authority over the ministers who made the decision to remove Maj.-Gen. Fortin from his secondment.”