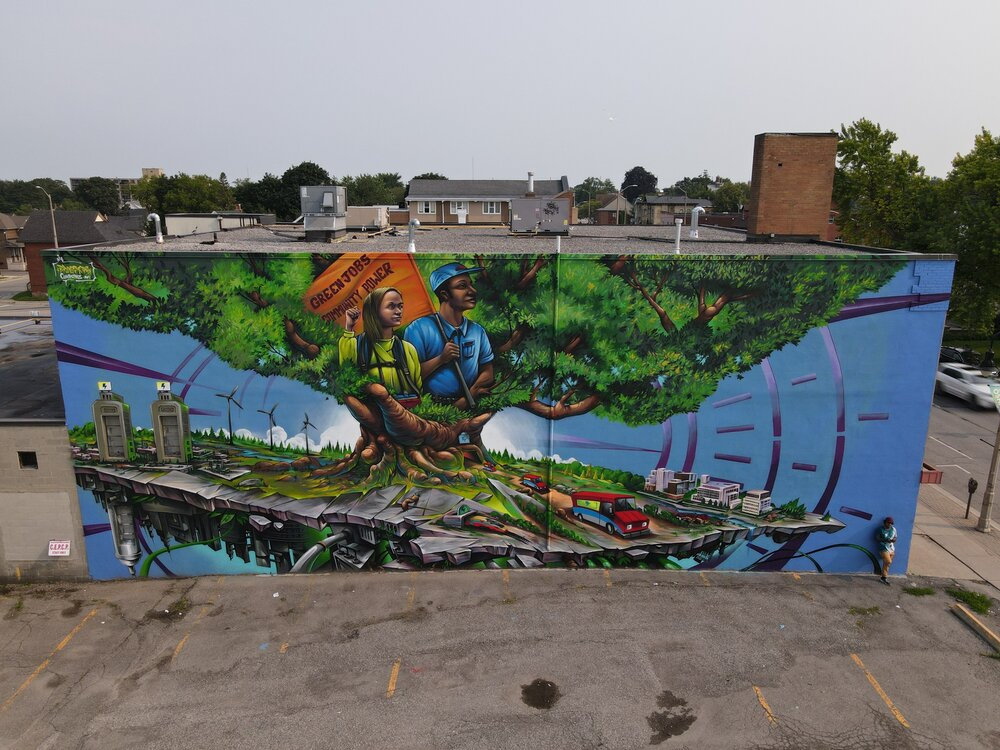 A new mural in downtown Oshawa depicts the city’s vision of a just transition and was created by Bruno Smokey of Clandestinos Art. Photo provided by Green Jobs Oshawa
Previous story
Next story

This week, grassroots organizations across the country are mobilizing to demand community-led just transition legislation within the first 100 days of Parliament as part of a “Climate Code Red” week of action.

From Oct. 12 to 17, more than 50 events are happening in nine provinces to pressure politicians to take action to help Canada shift its economy away from fossil fuels through petition drives, canvassing, community gatherings, and webinars.

“Prime Minister (Justin) Trudeau promised a just transition act, where is it?” asks Dylan Penner, a climate and social justice campaigner with the Council of Canadians, a non-profit, non-partisan national organization that advocates for things like fair trade, clean energy, clean water, and public services through collective action and grassroots organizing.

Penner says this is a critical political moment, with Parliament soon to resume and COP26, the United Nations climate talks, scheduled to begin in Glasgow, Scotland, later this month.

On July 20, Natural Resources Minister Seamus O’Regan launched a process to consult with several groups — including provinces and territories; First Nations, Inuit, and Métis communities; and labour and non-governmental organizations — on how to best make the transition to a “low-carbon future for workers and their families.” The consultations were bumped when the federal election was called, and the deadline for submissions — originally Sept. 30 — has been delayed until further notice.

A Natural Resources Canada spokesperson told Canada’s National Observer the department has received over 15,000 emails to date through the Just Transition website.

The spokesperson would not comment on the timing of any just transition legislation, saying: “The details regarding any proposed legislation and the formation of the Just Transition Advisory Body will be determined following the conclusion of the ongoing consultations.”

Starting this week, organizers and individuals are collecting signatures for “micro-petitions,” which they will then bring to their MPs — not just over the week of action, but in the coming months.

“The hope is that questions around a just transition act are raised in the House and the government will have to respond,” says Penner.

Twenty-five is the minimum number of signatures required to ask an MP to table a petition in Parliament and Penner says organizers will continue bringing these micro-petitions to their MPs throughout the first 100 days of Parliament to keep pressure on the government.

Grassroots organizations across nine provinces are mobilizing to push the government to implement just transition legislation within the first 100 days of Parliament. @CanadiansOrg has helped co-ordinate more than 50 local actions this week. #cdnpoli

“Micro-petitions and petitions guarantee time in the House to raise the issue in the petition, and in a minority Parliament, oftentimes, there is limited space. So, it's really amazing when you have dedicated organizers ensuring guaranteed time to talk about very important issues,” says NDP MP Laurel Collins, who expects to receive petitions from her constituents in Victoria, B.C.

Collins says she looks forward to working with organizers to push the government to implement timely, meaningful just transition legislation. Stopping “the delay that we've seen from this federal government” is one of the NDP’s priorities, she says, along with supporting workers in the transition away from fossil fuels, upholding Indigenous rights in the process, putting in place a plan to rapidly reduce greenhouse gas emissions, and creating green jobs.

In Kingston, Ont., Just Recovery Kingston, a non-partisan grassroots group of Kingston residents, has already delivered its first batch of petitions to Liberal MP Mark Gerretsen’s office, with over 250 signatures collected in total. Gerretsen’s staffers told organizers he would commit to bringing the petition forward in Parliament.

Jeremy Milloy, an organizer with Just Recovery Kingston, said its team has been busy advocating for a transition from the fossil fuel economy, and at the local level, a huge focus is free transit.

Last week, organizers covered bus stops all over the city to collect signatures and spoke to Kingston’s Environment, Infrastructure and Transportation Policies Committee about how to effectively invest in the transit system and expand free transit.

“Our mandate is: How can we help create a community where we take care of each other and take care of our land, air, and water?” said Milloy. Focusing on quality, affordable, accessible transit and expanding access to community gardens is the first step.

“It's basically all part of a transition I see from an economic system based on exploitation and competition towards … a world that is sustainable over the long-term where we are taking care of each other, we're taking care of the land, we're educating, we’re caring for the sick, (and) being there for the elderly,” said Milloy, who said he believes social justice and climate action are inextricably linked.

Petitions are also being gathered in the Prairies. For organizers like Laura Stewart, who is collecting signatures in Regina, Sask., this week of action presents an opportunity to concentrate the voices of folks who got lost in a sea of blue this election.

“I hope that we'll be able to convey to Parliament that it's not just solid opposition out here, that there are strong supporters for really ambitious climate action right across the country,” she said.

Along with getting an MP to take the petition to Parliament, Stewart hopes to start a conversation about what needs to be done to ensure a climate-safe future, how fast we need to act, and the difficulties associated with it.

“In the rural areas, I think people are more aware of how big the changes are that we're discussing in terms of phasing out fossil fuels. They have more of a sense of how huge a change that would be in their lives,” said Stewart.

“And in urban areas, I think people have a stronger sense of how badly we just need to go ahead and do it anyway.”

At 2 p.m. ET on Saturday, climate activists, local and global labour organizers, and current and former auto manufacturing workers will gather in Oshawa to support the week of action. The gathering is organized by Green Jobs Oshawa, a coalition of workers, community leaders, and environmentalists dedicated to repurposing the Oshawa Assembly facility.

In Oshawa, public ownership of important sectors of the economy is a key component of a just transition, according to Tony Leah, an organizer with Green Jobs Oshawa.

“We think it's so important to be urging the federal government to take actions that are in the interests of the people of Canada, and that (are) not be determined by what's in the best interest of corporations,” said Leah.

A free virtual conference about the role of pensions in working towards environmental justice,​ organized by the Ontario Federation of Labour (OFL), will take place on Friday and Saturday. The event will feature speakers like Seth Klein, author of A Good War: Mobilizing Canada for the Climate Emergency and a Canada’s National Observer columnist, and political theorist and activist Noam Chomsky.

“What's really important about this conference is really confronting climate in a different way,” said Patty Coates, president of the OFL. “We know that our pensions are invested in various areas, so we want to make sure the majority of that investment is in companies that care about the climate (and) will ensure that there's a just transition for workers.”

Penner says ensuring a just transition is informed by community-led work is critical because “we've seen the Canadian Association of Petroleum Producers and others really trying to influence the direction just transition legislation may go so it serves profits instead of people in communities.”

“So there's the question of whether and when Trudeau will introduce a just transition act and there's also a question of what's going to be in it,” says Penner. “That's why it's so important for people and communities to articulate the priorities that are important to them and to define what's in a just transition, so it's not left to corporations and the one per cent.”

"“We know that our pensions

"“We know that our pensions are invested in various areas, so we want to make sure the majority of that investment is in companies that care about the climate (and) will ensure that there's a just transition for workers.”
A nice sentiment, but where is the clause about a "preserving those savings to enable a just future for pensioners?

The article states, "From Oct

The article states, "From Oct. 12 to 17, more than 50 events are happening in nine provinces to pressure politicians to take action to help Canada shift its economy away from fossil fuels through petition drives, canvassing, community gatherings, and webinars.". It would be more powerful if links to those actions and/or the groups staging those actions were included to direct people to take part. A couple of groups/actions are mentioned but if you're truly 'national' all nine provinces where events are taking place should have been represented.