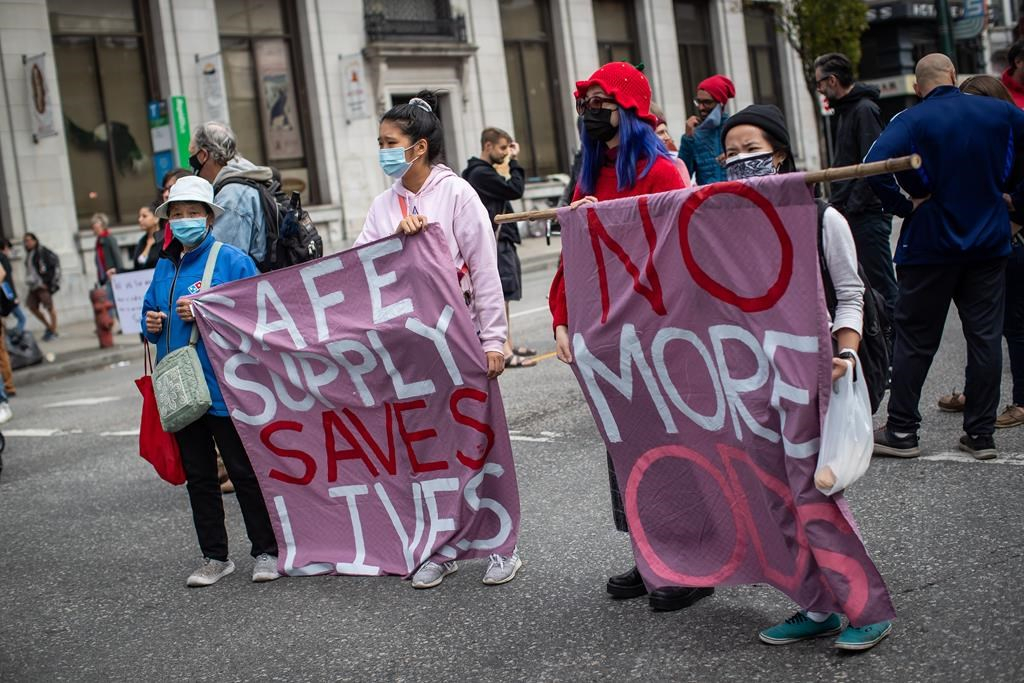 People hold a banner during a march to remember those who died during the overdose crisis and to call for a safe supply of illicit drugs on International Overdose Awareness Day, in Vancouver, on Aug. 31, 2021. File photo by The Canadian Press/Darryl Dyck
Previous story
Next story

Prime Minister Justin Trudeau is being urged to decriminalize the possession and use of illicit drugs as a way to combat the opioid crisis that has resulted in thousands of deaths in Canada.

Almost 70 organizations from across the country — including the HIV Legal Network, the British Columbia Civil Liberties Association, and the National Association of Women and the Law — have written a letter to Trudeau asking that he make drug policy reform a priority for his newly re-elected Liberal government.

They want drug possession to be immediately decriminalized and all criminal sanctions and penalties related to drug use to be eliminated.

And they want federal funding to ensure "low-barrier access" to a safe supply of drugs.

Almost 23,000 Canadians died from an opioid overdose between January 2016 and March 2021 and the groups say those deaths were fuelled by "a contaminated drug supply and the stigma associated with drug use" which is only reinforced by criminalizing drugs and drug users.

Trudeau has so far rejected wholesale decriminalization of simple drug possession and consumption, although a resolution to that effect was approved by Liberals at the party's convention in 2018.

However, his government has taken incremental steps toward treating drug use as a health issue rather than a criminal one.

In the Liberal platform for last month's federal election, the party pledged to reintroduce within 100 days a bill that would repeal mandatory minimum penalties for drug offences and some gun-related crimes.

While primarily aimed at redressing the disproportionate number of Black and Indigenous people who wind up in jail, Bill C-22 was also intended to address the opioid crisis.

Trudeau urged to make #decriminalization of #IllicitDrugs a priority. #OpioidCrisis

The bill, which never made it beyond the opening round of debate in the House of Commons, died when Trudeau called the election in August.

Justice Minister David Lametti reiterated Wednesday the government's commitment to reintroducing the legislation quickly, saying in a statement that it "will help make our system more just for all and more effective in keeping communities safe."

“As the opioid and overdose crisis continues to worsen we must take every measure possible to reduce harms and save lives," her office said in a statement.

"We recognize the different approaches cities, provinces, and other organizations are taking and are supportive of their work. We know there is more to do and our government will remain engaged with them to move these health-based approaches forward.”

However, the organizations that wrote to Trudeau argue that there is no time to waste in moving directly to decriminalization of possession and consumption of drugs.

"Each day that goes by under a regime of criminal prohibition is a day in which government policy contributes to the often-deadly stigma surrounding drug use," they wrote.

"The time to decriminalize drugs is long overdue ... There is no time to waste as the COVID-19 pandemic continues to exacerbate the ongoing public health crises of drug toxicity injuries and deaths."

Could decriminalization be the answer to B.C.’s overdose crisis?