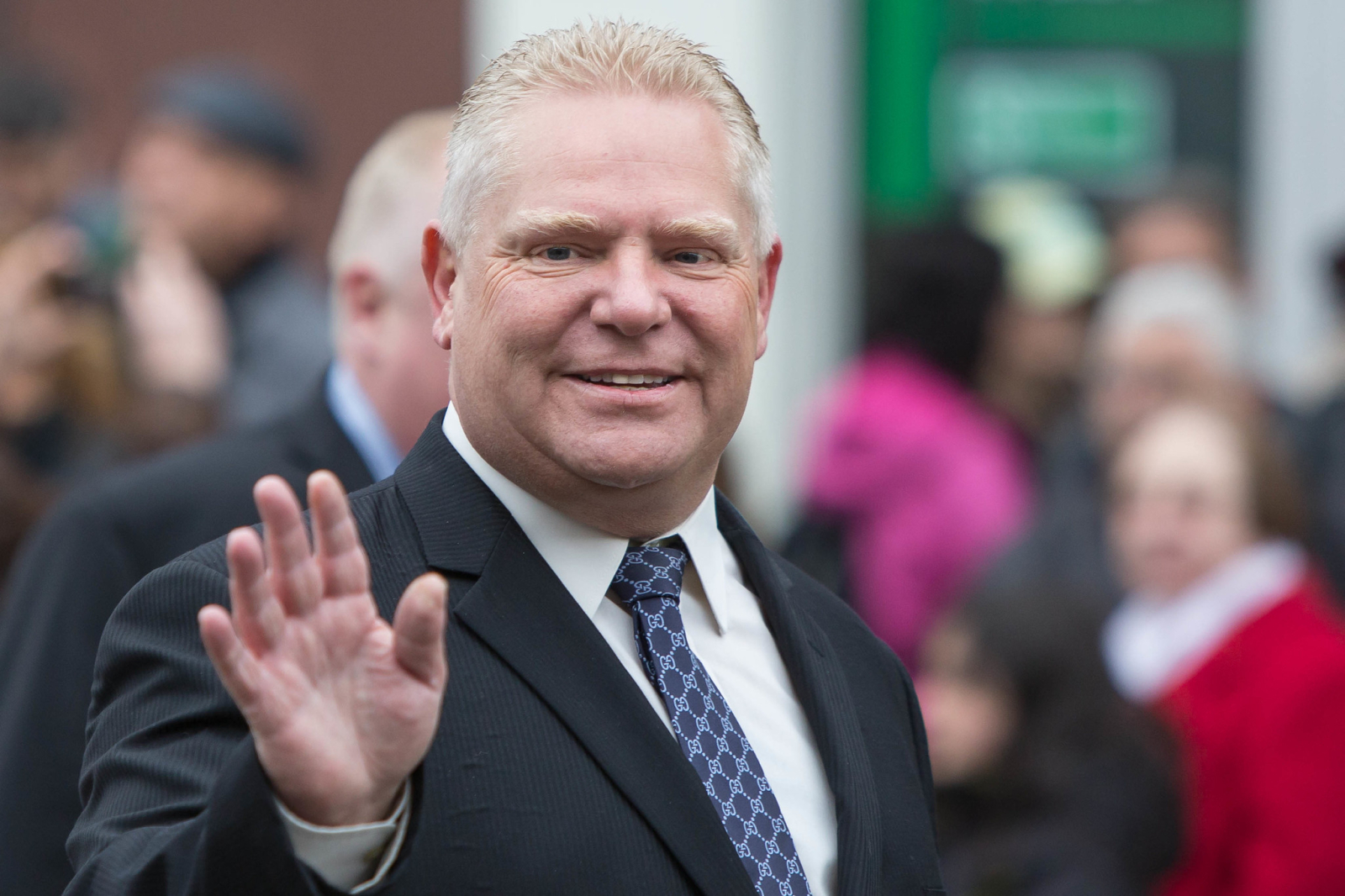 If progressives want to avoid another four years of Doug Ford, they’ll have to find a way to stomach the idea of actually working together, says columnist Max Fawcett. Photo by Bruce Reeve / Flickr (CC BY-SA 2.0)
Previous story

Ontario’s next provincial election is eight months from now, but Premier Doug Ford has apparently decided the campaign is already underway. Despite leading one of the most incompetent and transparently self-serving governments in the country, the vagaries of the first-past-the-post system mean Ford’s Progressive Conservative Party has a decent chance of actually winning.

A series of recent polls have the PCs consistently in the lead, with the Liberals and NDP alternating for second place. They all tell slightly different versions of the same story, one where Ford’s PCs are at once ahead of the two opposition parties and well behind their combined totals. That was the story of the 2018 campaign, where the NDP and Liberal vote exceeded the PC candidate’s totals in 36 of the 76 seats they won.

In order to prevent it from being retold in 2022, Ford’s two main opponents need to do something that’s practically unheard of in Canadian politics: co-operate with each other.

There’s a precedent for this in Ontario’s political past when Bob Rae’s NDP and David Peterson’s Liberals formed a coalition in 1985 that finally wrested power away from the PCs, who had been in power for 42 consecutive years. While Frank Miller’s PCs won 52 seats in that election, the NDP (with 25) and Liberals (with 48) combined their totals to command the confidence of the legislature — or, as Rae put it, avoid the “day-to-day blackmail bullshit” of minority governments.

That could easily serve as a template for 2022, since current polls suggest a roughly equivalent distribution of seats.

But Andrea Horwarth’s NDP and Steven Del Duca’s Liberals need to take that one step further and co-operate before the election takes place. By standing down in a select (and equivalent) number of ridings and allowing the progressive vote to coalesce more efficiently around one party or the other, they can ensure Ford is removed from office.

And by making the implementation of electoral reform the first act of a non-PC government, they can also ensure the vote-splitting that has plagued Ontario’s progressives in the recent past is left there permanently.

Del Duca has already pledged that, if elected premier, his government would implement a ranked ballot for future provincial elections — and that he’d resign if he didn’t get it done before the end of his first term in office. “Ranked ballots will mean that parties and leaders will have to compete for voters' second choices, so it won't make sense for leaders and parties to demonize one another,” he said in a recent speech.

But that will only help with future elections.

If New Democrats and Liberals want to avoid splitting the progressive vote and handing Ford another four years in office, they need to do something now. After all, while the premier will continue putting his foot in his mouth, as he did with his recent comments about immigrants coming to Ontario to “collect the dole and sit around,” the team behind him isn’t stupid. Leger’s most recent poll has Ford’s PCs with a 41-29 lead in the seat-rich GTA, and they’re apparently going to press that advantage in the 905 region by promising to build the controversial Highway 413.

Opinion: If New Democrats and Liberals want to avoid splitting the progressive vote and handing Doug Ford another four years in office, they need to do something now, writes columnist @maxfawcett. #ONpoli

The proposed 59-kilometre highway would connect Vaughan, Mississauga, Brampton, and Milton at a cost of at least $6 billion, and cover a swath of the region’s Greenbelt with blacktop in the process. Ford has argued it will reduce commute times by as much as a half-hour, even though a previous study suggested the time saved would be measured in seconds rather than minutes.

But no matter, because as the CBC reported, “Top strategists with Ford's Progressive Conservatives believe the highway is a wedge issue that will help them hold on to crucial swing seats in York, Peel, and Halton regions, since the New Democratic, Liberal and Green parties all oppose the project.”

In other words, they’re going to run very deliberately on issues that both amplify the existing vote split between New Democrats and Liberals and maximize their chance of benefiting from it.

If progressives want to avoid another four years of Ford, they’ll have to find a way to stomach the idea of actually working together. The alternative, as Ontarians have already seen time and time again, is a government that only works for itself.

This needs to be done across

This needs to be done across the country; it's the only way to actually get rid of conservative "governance." Max suggests strategic voting which is already employed, but unevenly, so isn't enough.
I don't see why progressives can't be called out on their undeniable "NARCISSISM of SMALL differences" that exposes their pure hypocrisy about why ANY of them are in politics, period. After all, progressives are supposed to be the smart ones and the most humane ones who primarily care about people.
We have an abiding majority in the general population so need to get our act together before it's too late, and the right wing's depressing but inarguable success in stoking tribalism and division takes us all down.

I agree with Mr. Fawcett that

I agree with Mr. Fawcett that the NDP & Liberal parties MUST find a way regardless of ideology differences to work together in order to defeat Ford and the PCs.
John Berke

Yes. As I just said. The

Yes. As I just said. The narcissism of small differences, or missing the forest for the trees.

I'd be much more willing to

I'd be much more willing to agree with you if I saw any indication that Liberals want to do anything other than steal NDP policy and votes, talk a left wing line, and then climb back on that white picket fence of feel good, do little that we've witnessed over the decades.

If we get an affordable day care program I might begin to believe they mean their rhetoric.....but even then...Liberals would have to agree to not compete in ridings where the ndp had the edge.......and frankly,

I'm nor holding my breath. It would also help if they undid some of the worst legislation put in place under Harper, but again, it mostly doesn't happen, perhaps only because it would take some hard work.

I'm all for cooperation....but shudder to think where we'd be heading once the Liberal establishment succeeded in coopting the NDP....under the guise of 'working together'.

Of course Del Duca wants a

Of course Del Duca wants a ranked ballot. He's a Liberal. So did Trudeau. Ranked ballot systems are NOT proportional and they tend to favour centrist parties such as Liberals, since both left and right parties will tend to rank centrists before the other end of the ideological spectrum (maybe not in Alberta). The NDP would be fools to go along with the idea; it's certainly far from a basis for co-operation.

Probably neither Del Duca nor Horwath really want to co-operate, and probably it would be a good idea if they did. But for there to be any basis, Del Duca would have to agree to real electoral reform to a proportional system, not ranked ballots which from an NDP (or Green) perspective are just a way for Liberals to formalize poaching their votes.

Since when have the Liberals

Since when have the Liberals been a progressive party? If there's a split between progressives, it's between New Democrats and Greens. Like the Conservatives, the Liberals are a status quo, big business party, though more liberal on cultural issues. And as Rufus Poison points out, ranked balloting is no substitute for proportional representation; Liberals like it because it would tend to skew election results in their favour.

Every comment here is a perfect example of that very narcissism of small differences! Totally tribal, aligning yourself exclusively with ANY political party, especially one that has never actually attained governance. Doesn't it occur to you that there may be some structural realities that limit ideology AND idealism once you're actually in power? How you can equate the Liberals with Conservatives, ESPECIALLY the current Reform iteration that hasn't just removed the WORD "progressive" from their name; they've made it pure anathema, like the perfectly reasonable concept of "socialism," not to mention jumping on the anti-science, anti-fact, anti-reality bandwagon that is currently, and seriously endangering American democracy. And the right wing here follows the same playbook.
There is a VAST difference philosophically as well as in regards to basic open-mindedness.

What's the difference between

What's the difference between the Conservative and Liberal platforms? The colour: Robyn Urback
https://www.cbc.ca/news/opinion/policy-platforms-1.5298859
Admittedly, this column is from way back in 2019. Perhaps the Liberals have changed their stripes since then?

Finally, someone writing about something that so many of us know. Something clearly needs to be done, and I suggest having each party not run candidates in some ridings. The differences between the NDP and Liberals are small, indeed. We really need to do something to prevent a Tory majority with 33% of the popular vote.