Container fire on cargo ship off B.C. coast is now under control 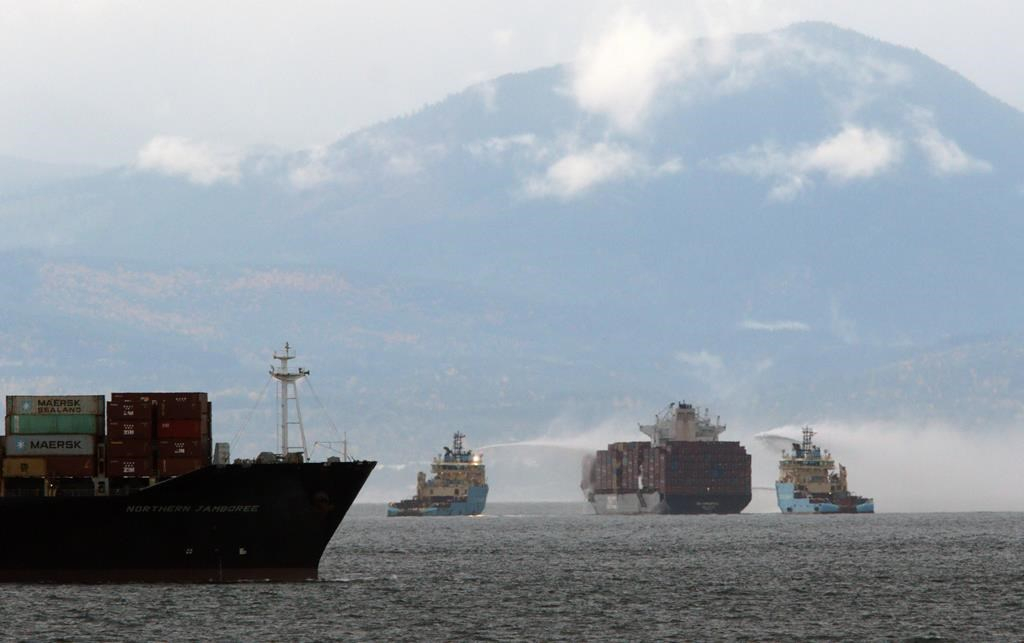 Ships work to control a fire onboard the MV Zim Kingston about eight kilometres from the shore in Victoria, B.C., on Sunday, October 24, 2021. Photo by The Canadian Press/Chad Hipolito
Previous story
Next story

Officials don't yet know how many containers burned aboard a cargo ship in a still-smouldering blaze off the coast of Victoria, a spokesman for the Canadian Coast Guard said Sunday.

The flames initially spread to 10 containers after another 40 fell overboard in choppy waters on Friday, but JJ Brickett said the fire on the MV Zim Kingston was mostly under control by Sunday afternoon.

"Looking at the actual images, it's a pile," Brickett told a virtual news conference. "The containers burned down to basically their shell and then collapsed on top of one another."

Provincial and federal officials are working with all the First Nations on the west coast of Vancouver Island while investigating the fire aboard the ship, he said.

Brickett said the location of some of the containers that landed in the ocean is being monitored by helicopter, but efforts to retrieve them can't start until after a break in a storm that is forecast to worsen until Monday.

Efforts to read labels on the downed containers in order to try and identify their contents have not been fruitful and officials are trying to account for all of them, Brickett said.

"One of the objectives for the response is 100 accountability for all of these containers — where they are, what happened to them, what was in them. And to the extent that we can, how can we recover them."

The MV Zim Kingston had experienced some damage as it approached Vancouver and the crew were in contact with the Canadian Coast Guard and Transport Canada, he said, adding the vessel was assessed off the Strait of Juan de Fuca where it was anchored for repairs and to await further contact with the latter agency.

He said Transport Canada inspectors will be aboard the ship after the "emergency phase" of securing the safety of the vessel and those still on it, and that its Greece-based owner is providing assistance.

Earlier Sunday, the coast guard said in a tweet that the hull of the MV Zim Kingston had been cooled overnight by a tugboat spraying it with water. Applying cold water directly to the burning containers was not an option because two of them contained 52,000 kilograms of a hazardous material identified as potassium amylxanthate.

#Fire on #CargoShip in #BC under control but not known how many containers burned.

It said the blaze aboard the ship about eight kilometres off the coast of Victoria posed a significant risk to mariners but not people on shore.

The coast guard said it received word late Saturday morning about a fire in 10 damaged containers aboard the vessel, which was anchored in Constance Bank, B.C.

It noted the ship itself was not on fire, but said in a tweet that an emergency zone had been doubled to two nautical miles around the Zim Kingston.

The Joint Rescue and Coordination Centre in Victoria said 16 crew members were safely taken off the ship, while five others, including the captain, remained on board at their own behest.

Canadian Coast Guard spokeswoman Michelle Imbeau said an incident command post led by the agency on behalf of the federal and B.C. governments, as well as First Nations representatives, was co-ordinating a multi-agency response to the fire.

She said the command post was also working with the U.S. Coast Guard to monitor the 40 containers that fell overboard from the Zim Kingston in rough seas on Friday and were floating about 12 nautical miles off the west coast of Vancouver Island, near Bamfield, B.C.

The coast guard said a hazardous materials crew from Vancouver was mobilizing and the owner of the Zim Kingston had contracted the U.S.-based Resolve Marine Group for salvage operations, including firefighting and recovery of the containers.

Resolve Marine had mobilized two vessels that were expected to be on site Sunday.

Peter Lahay, national coordinator of the International Transport Workers Federation, said he contacted Transport Canada on Friday and was told no crew members were hurt and that inspectors would board the ship when it got to Vancouver.

"In my view, after such an extraordinary container spill, marine safety inspectors should have been aboard that ship on arrival. If they had, perhaps we would have known about the fire, or potential fire, sooner," he said.

However, Lahay said he believes the federal agency is woefully underfunded and short-staffed, and as a consequence, too few inspections take place.

"Canada needs to do a better job being resilient and being better able to respond to these things. We kind of wasted a day (Saturday) trying to figure out what to do to mitigate this fire, and we should have been more prepared," he said.

The union has contacted the crew members brought ashore to Victoria to stay in local hotels to see if they need help, Lahay said.

“They came ashore without any clothes and we’ll assess what we need to do to assist this crew," he said of the "maritime disaster."

— By Camille Bains in Vancouver, with files from Michael Tutton in Halifax