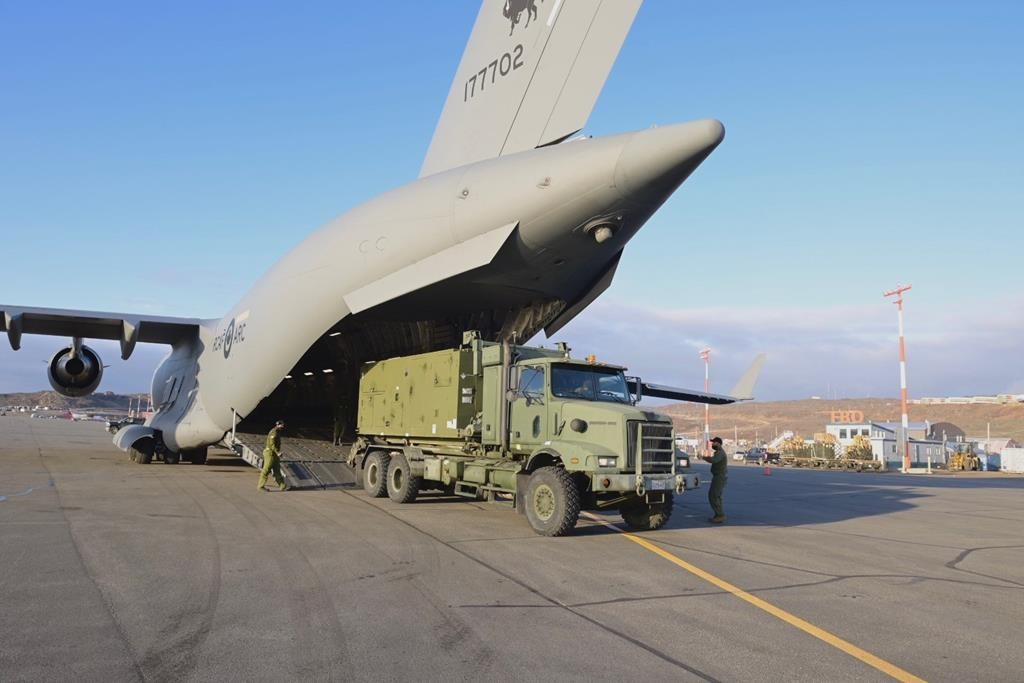 The Canadian Armed Forces says its members have arrived in Nunavut's capital to assist with the city's ongoing water emergency.

Prime Minister Justin Trudeau tweeted Friday that he had spoken with Nunavut Premier Joe Savikataaq and the military would be deployed to Iqaluit to co-ordinate and deliver clean drinking water.

Update: We’ve received and approved a request for assistance from the @GovOfNunavut. To help coordinate and deliver clean drinking water to the people of Iqaluit, we’re deploying members of the @CanadianForces to the community. https://t.co/IZCvnDX7B2

Late Saturday, the military tweeted that there are over 20 Canadian Armed Forces members in Iqaluit setting up deployable equipment for reverse osmosis water purification.

Maj. Susan Magill, a public information officer for Joint Task Force North, said one purification unit arrived in Iqaluit in a military jet on Saturday and a second was on its way Sunday.

"It's as big as a sea can and it comes loaded and ready to go on a truck. So when the aircraft opens up, the truck rolls out," Magill said of the purification units during an interview Sunday in Iqaluit.

"We're still in the process of trying to find a good site to put these two units on."

Iqaluit's 8,000 residents haven't been able to consume tap water for nearly two weeks after fuel was found in samples.

Residents have been collecting water from the city's Sylvia Grinnell River and picking up free bottled water from distribution sites, and local officials say they're continuing efforts to identify the source of the contamination.

Magill said Canada's water purification units have been used in the past in warm climates like Haiti and the Philippines, so running them in Iqaluit in late October will be a new experience for the team.

"It's definitely going to be a challenge, but the team is up here for precisely that," Magill said, noting that three members of the group are already based in the city.

The plan, she said, is for purified water to be stored in large bladders, and then the city will collect it in trucks for distribution. She said that at 8 degrees Celsius, one of the units can purify 5,000 litres per hour if the water is passed through the system once, or half that much if it's put through the unit twice.

Testing will determine how much purification the water will need, and Magill said it could take a few days or a week before the units are ready to produce water for consumption.

She said the deployment is scheduled to last until Nov. 17, at which time it will be reassessed.

In a news release Sunday, the city said the investigation into the cause of the tainted water has pointed to potential hydrocarbon contamination in the soil or ground water outside the municipal treatment plant, which it said may have leached into a storage tank.

"The in-ground tank containing the high concentrations of contaminants in the Water Treatment Plant has been isolated, pumped out for remediation and has undergone cleaning," the release stated.

"The affected tank has been successfully bypassed and water continues to be treated and sent out to the City’s distribution system."

That system has been flushed out, but the city said it will need to be done again and an order not to consume the water remains in place.

The territory's chief public health officer, Dr. Michael Patterson, told a news conference Friday that residents may still smell fuel in their water even though the city has bypassed the contaminated tank.

Patterson has said the health risks to residents who drank the city's tap water are very low.

Sunday's news release from the city noted that an environmental site assessment is underway where contractors will drill for soil and water samples around the treatment plant. It said the next steps are dependent on the test results.

"We will take direction from our experts on actions required to remediate the site," the release stated.