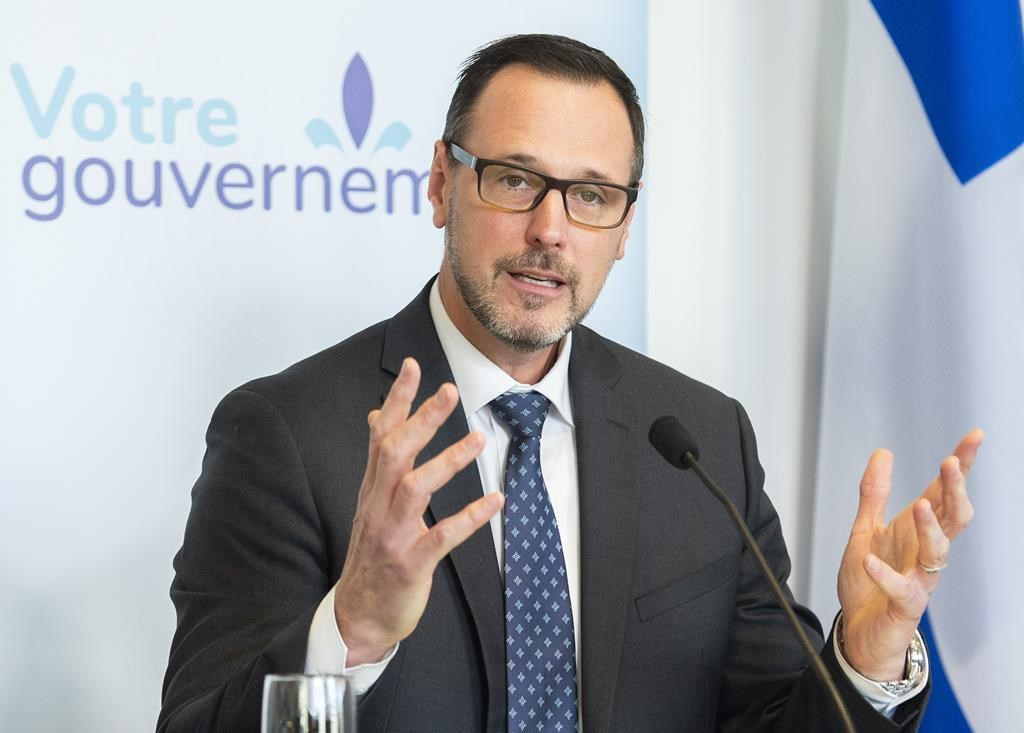 Quebec Education Minister Jean-Francois Roberge speaks during a news conference in Montreal, on Sunday, October 24, 2021, where he outlined plans to replace a class on religious culture and ethics. Photo by The Canadian Press/Graham Hughes
Previous story
Next story

Jean-François Roberge held a news conference to unveil details of the new course, dubbed Culture and Citizenship in Quebec. He was joined by Isabelle Charest, the minister responsible for women, as well as various key players from Quebec's cultural scene.

"You know Quebec is different from the rest of North America," Roberge said. "We are not New York, Vermont, Ontario or New Brunswick. We have a Quebec way of life. We have our artists, Francophone and Anglophone, our cultural legacy. We are not ashamed to share this culture with our kids."

The new class is intended to replace a course on ethics and religious culture that's been taught in the province's schools since 2008.

Roberge said the new curriculum was built around three main themes. The first will explore diverse cultures with an emphasis on Quebec. The citizenship plank of the program will teach the province's values and responsibilities, while content intended to teach ethics is also meant to develop students' critical thinking skills.

Roberge said the class aims to provide "national cohesion" as well as fight against sexism, racism and sexual violence. He also positioned the revamped curriculum as an "obstacle to censorship."

The current program has faced years of relentless criticism from Quebec nationalists and committed secularists for allegedly putting too much emphasis on multiculturalism and diversity.

Roberge, however, cited different grounds for objection when critiquing the present-day course.

He said the ethics and religious culture class is not offering enough space for students to ask critical questions.

"We need to be able to discuss and debate everything respectfully," Roberge said. "It cannot be a taboo and censorship class, it needs to be a course on freedom of expression and learning about personal relationships."

The provincial government had announced plans to abolish the course last year following criticisms that too much time was being taken up by a section devoted to religions.

Roberge said religion will not be completely erased from the new program, but will not be the primary focus anymore.

"Of course, when you talk about culture you will have to talk about religious culture, but it's not the only way," he said. "... We have to modernize our program."

She also said the program does not address issues related to Indigenous peoples, calling the approach "quite limited."

Roberge said the new course will teach residents how to navigate Quebec society and take pride in their province. It will include sections on the province's judicial system, critical thinking, social media and sex education among others, he added.

Charest said not a week goes by in the province without reports of unacceptable behaviours, such as domestic violence which disproportionately affects women and girls. She hopes the new course offering will help tackle those issues.

"Students will be invited to reflect on notions of consent, respect, self-affirmation, empathy and equal relationships between men and women," Charest said.

The new program will be introduced in some schools as a pilot project in September 2022 before being fully implemented across all of the province's elementary and high schools a year later.

Quesnel, however, said the curriculum's ambitious scope risks trying to cover too many topics at once.

She said Sunday's announcement looked like a "show" in which the province attempted to sell the new program, but noted that not a single teacher was present at the news conference.

"I feel like the government is kind of using this curriculum to position itself as the guardian of Quebec values and impose its vision," Quesnel said.

She also said teachers are worried about how many hours will be allocated for the course, and if they will receive proper training beforehand.

"Teachers are used to multitasking, but when we are talking about all these topics, they are quite specific," Quesnel said. "It's not only about writing a good manual and teachers will follow. It really needs more training than that."