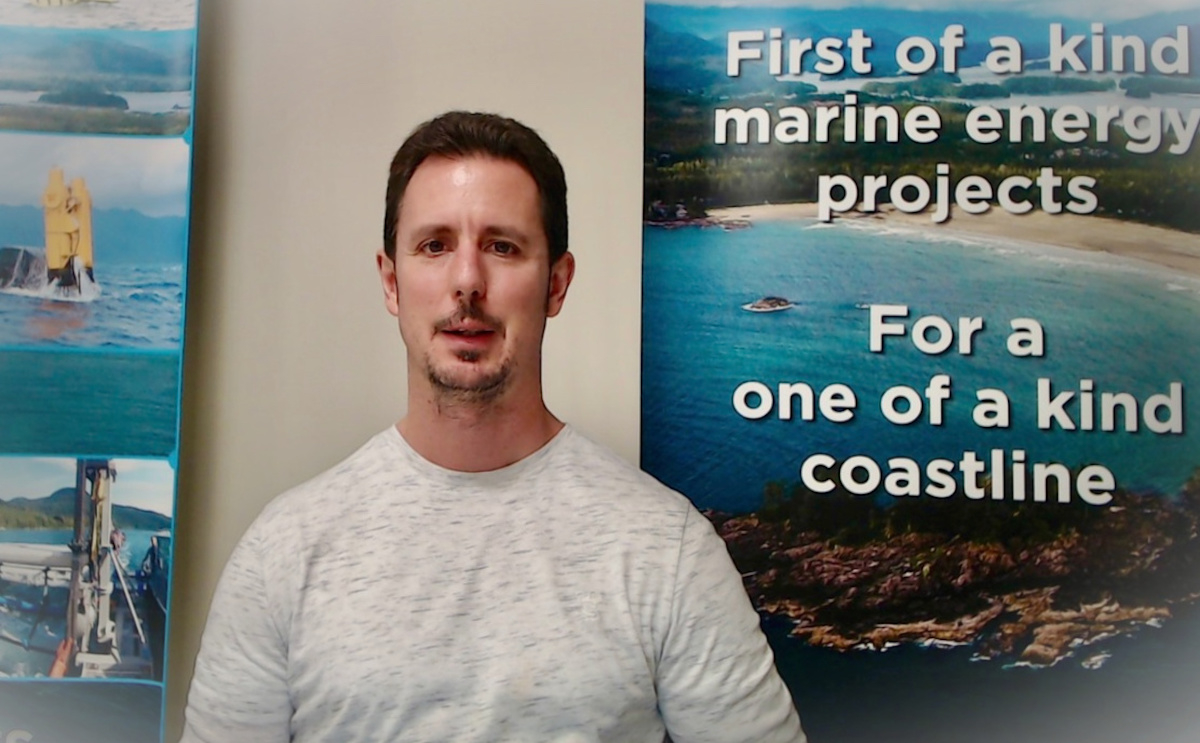 Many remote West Coast communities rely on diesel for electricity generation, which poses a range of negative economic, social, and environmental effects.

But some sites along B.C.’s extensive coastline are ideal for tidal energy micro-grids that may well be the answer for off-grid communities to generate clean power, suggested experts at a COAST (Centre for Ocean Applied Sustainable Technologies) virtual event Wednesday.

Tidal energy exploits the natural ebb and flow of the coast’s tidal water and is a highly predictable source of renewable energy, says Ben Whitby, program manager at PRIMED, a marine renewable energy research lab at the University of Victoria (UVic).

Micro-grids might someday be able to provide clean power to many coastal communities, and the best candidates for tidal energy are small, off-grid communities largely dependent on costly fossil fuels, Whitby said.

“The time it would take (these communities) to recoup any capital investment is a lot shorter.

“And the cost is actually on a par because they're already paying a significant amount of money for that diesel-generated power.”

There are challenges involved, including the added cost and complexity of construction in remote communities, the storage of intermittent power for later use, the economic model, the costs associated with tidal power installations, and financing for small communities, said Lisa Kalynchuk, vice-president of research and innovation at UVic.

But smaller tidal energy projects can potentially set a track record for more nascent marine renewables, at a lower cost and without facing the same social or regulatory resistance a large-scale project might face.

Lisa Kalynchuk, vice-president of research and innovation at UVic, said she was excited by the possibilities associated with tidal power, not only in B.C., but for all of Canada’s coasts. #Renewables

A successful tidal energy demo project was set up using a MAVI tidal turbine in Blind Channel to power a private resort on West Thurlow Island, part of the outer Discovery Islands chain wedged between Vancouver Island and the mainland, Whitby said.

The channel’s strong tidal currents, which routinely reach six knots and are close to the marina, proved a good site to test the small-scale turbine and associated micro-grid system that could be replicated to power remote communities, he said.

The mooring system, cable, and turbine were installed fairly rapidly and ran through the summer of 2017. The system is no longer active as provincial and federal funding for the project came to an end.

“But as a proof of concept, we think it was very successful,” Whitby said, adding micro-grid tidal power is still in the early stages of development.

Ideally, the project will be revived with new funding, so it can continue to act as a test site for marine renewable energy and to showcase the system to remote coastal communities that might want to consider tidal power, he said.

The Blind Channel project was installed using the local supply chain out of nearby Campbell River, he said.

“Most of the vessels and support came from that area, so it was all really locally sourced.”

There are a number of potential tidal energy sites near off-grid communities along the mainland, on both sides of Vancouver Island, and in the Haida Gwaii region that could be tapped to provide clean energy, Whitby said.

Currently, there are around 40 isolated communities along the coast and 32 are primarily reliant on diesel for electricity generation, said Whitby, noting many remote locations are Indigenous communities.

Besides being a costly and unreliable source of energy, there are environmental and community health considerations associated with shipping diesel to remote communities and running generators, Whitby said.

“It's not purely an economic question,” he said.

“You've got the emissions associated with diesel generation. There's also the risks of transporting diesel … and sometimes in a lot of remote communities on Vancouver Island, when deliveries of diesel don't come through, they end up with no power for three or four days at a time.”

The Heiltsuk First Nation, which suffered a 110,000-litre diesel spill in its territorial waters in 2016, is an unfortunate case study for the potential environmental, social, and cultural risks remote coastal communities face from the transport of fossil fuels along the rough shoreline.

A U.S. barge hauling fuel for coastal communities in Alaska ran aground in Gale Pass, fouling a sacred and primary Heiltsuk food-harvesting area.

Besides obvious environmental benefits, renewable micro-grids can offer communities a measure of energy sovereignty, since the community, rather than a public utility like BC Hydro, is responsible for demand management, storage, and generation of power systems running independently or alongside backup fuel generators.

But depending on proximity, cost, and other renewable solutions, tidal energy isn’t necessarily the answer for every community, Whitby noted, adding that if access to hydro power is available, tidal energy is still more expensive.

Funding from senior levels of government would likely need to be provided to set up a permanent tidal energy demonstration site, or to help a community do case studies and finance a project, Whitby said.

Both the federal and provincial governments have established funding streams to transition remote communities away from relying on diesel.

But the projects funded federally or provincially to date have focused on more established renewables, such as hydro, solar, biomass, or wind.

The goal of B.C.’s Remote Community Energy Strategy, part of the CleanBC plan, is to reduce diesel use for electricity 80 per cent by 2030 by targeting 22 of the largest diesel locations in the province, many of which fall along the coast.

The province has announced a number of significant investments to shift Indigenous coastal communities away from diesel-generated electricity, but they predominantly involve solar or hydro projects.

And the funding application guide in 2020 deemed tidal projects as ineligible for cash.

But there’s lots of potential for tidal energy micro-grids in B.C., Kalynchuk said, noting UVic is a hub for significant research expertise and several local companies are employing and developing related service technologies to install and maintain the systems.

And that potential is not limited to the West Coast, but across Canada.

“Of course, not all this power can be realized, but it does exist, so that leads us to the hard part — tapping into this available energy and delivering it to those remote communities that need it.”

Exploring tidal microgrids addresses the need to develop alternative sources of energy in the face of the climate crisis, she said.

“The path forward is complex and layered, but one essential component in combating climate change is a move away from fossil fuels to other sources of energy that are renewable and environmentally friendly.”