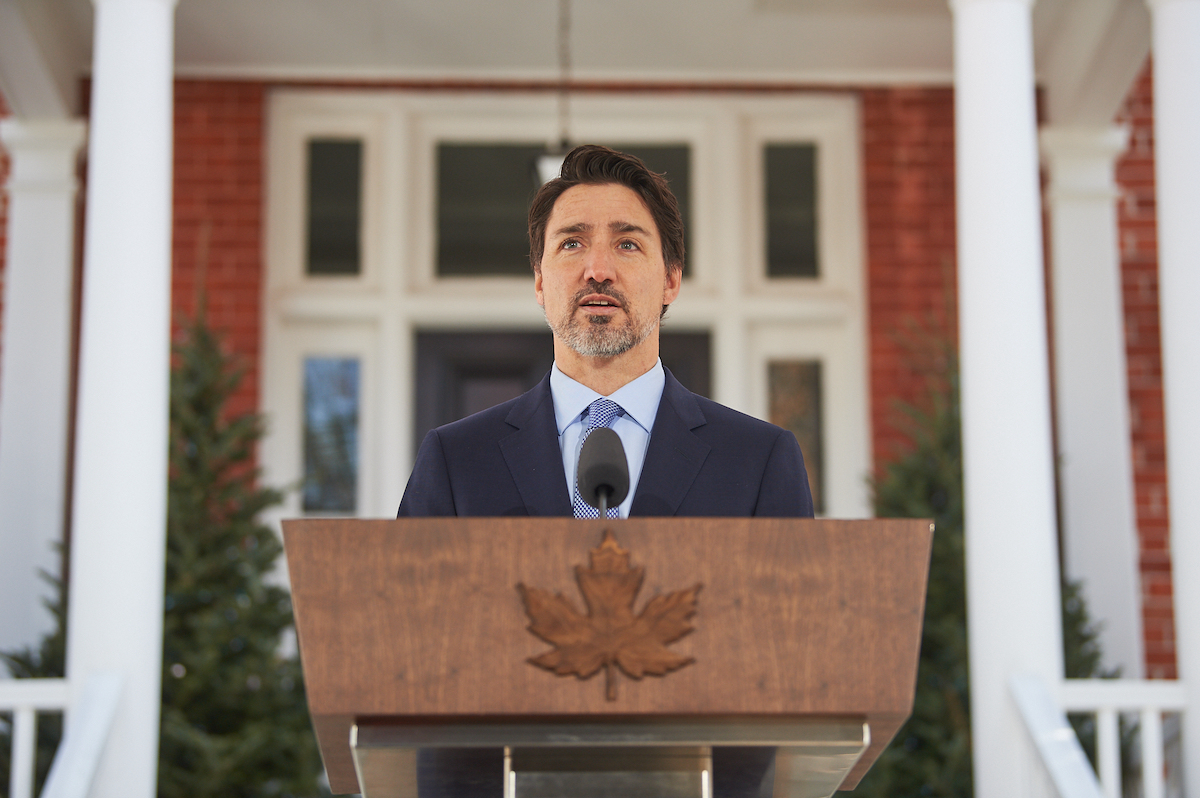 As Justin Trudeau and his most senior advisers finalize their cabinet picks, they have an embarrassment of riches to choose from among the 160-member Liberal caucus, writes Andrew Perez. File photo by Alex Tétreault
Previous story

Since the news leaked to media, political reporters, pundits, and Liberal Party insiders have been awash in intense speculation around “who will be in and out” of the prime minister’s inner circle come Tuesday.

Cabinet conjecture has long been political Ottawa’s favourite guessing game and one that virtually anyone who has worked in and around partisan politics will engage in with gumption. But it always bears underlining that those truly in the know about the new cabinet’s configuration — not more than three to four top advisers — aren’t talking.

This cabinet shuffle is likely to be broad, involving several moving parts. It’s not a mid-mandate fine-tuning, but more akin to an overhaul. And the structure and composition of this cabinet must be seen through the lens of legacy-building.

That’s because Trudeau is unlikely to seek a fourth mandate.

In many respects, Trudeau Jr. finds himself in the position former prime minister Jean Chretien was in following the 2000 federal election. After forming a third consecutive majority government, it was well understood that Chretien would not seek a fourth mandate.

As a result, the cabinet Chretien put together in the weeks following the 2000 election — and his policy agenda over his final three years in power — were heavily influenced by his desire for legacy-building.

It was throughout this period that Chretien steadily moved his government to the centre-left of the political spectrum, introducing legislation that would eventually legalize same-sex marriage, decriminalize the possession of small amounts of marijuana, and enact the Kyoto Protocol.

Trudeau is likely thinking along similar lines these days, especially in light of his inability to recapture a majority government last month. The prime minister must know that the next two to three years of this minority government — if it endures that long — will be crucial to enacting major policy reforms that will ultimately form part of his political legacy.

Opinion: From East to West, here are the backbench MPs the prime minister will seriously consider as he seeks to inject new blood into his #cabinet at the six-year mark of this government, writes @andrewaperez. #Cdnpoli

Diversity is incredibly important to this prime minister’s political brand, but it’s equally critical to his approach to governing.

Trudeau genuinely believes there is a direct correlation between more diverse voices around the cabinet table and policies that more effectively tackle the challenges a varied cross-section of Canadians encounter in their everyday lives.

As the prime minister and his most senior advisers finalize their cabinet picks, they have an embarrassment of riches to choose from among the 160-member Liberal caucus.

From East to West, here are the backbench MPs the prime minister will seriously consider as he seeks to inject new blood into his cabinet at the six-year mark of this government.

In Atlantic Canada, with the defeat of Fisheries and Oceans Minister Bernadette Jordan, Trudeau finds himself down one female cabinet minister. Watch for Jordan’s spot to be replaced by fellow Nova Scotian Lena Diab (Halifax West).

Diab is a rookie MP, but she comes to Ottawa with impeccable governing credentials: Diab has served as a senior cabinet minister in the Nova Scotia government since 2013, holding the prominent role of minister of justice and attorney general. Diab is also the daughter of first-generation Lebanese immigrants — a biographical footnote that is surely not lost on this prime minister.

In rural Nova Scotia, Sean Fraser (Central Nova) might also be in line for a promotion. A millennial, Fraser has ably served his riding since 2015. The veteran MP is whip-smart, a talented communicator, and universally respected in Ottawa. Throughout the pandemic, Fraser served as Finance Minister Chrystia Freeland’s parliamentary secretary — a role long seen as a stepping stone to cabinet.

In Quebec, the backbench MP most likely to join the executive ranks is neophyte MP Pascale St-Onge (Brome-Missisquoi).

St-Onge’s electoral victory is as remarkable as her personal story. She won her Eastern Townships riding by a mere 186 votes thanks to mail-in ballots. A judicial recount did not confirm the constituency was officially in the Liberal fold until just last week.

St-Onge is the former president of the Fédération nationale des communications et de la culture in Quebec — a union that works to address the economic challenges facing both media and cultural organizations.

If appointed to Trudeau’s cabinet, she’d also be the first openly gay female cabinet minister — an opportunity the prime minister is not likely to pass up, given how much he likes to have these kinds of firsts on his scorecard.

Other Quebec MPs who have a shot at entering cabinet include Gatineau-area MPs Steven MacKinnon (Gatineau) and Greg Fergus (Hull-Alymer). Both are flawlessly bilingual veterans who served as former Liberal Party national directors.

In Canada’s most populous province, there will be intense jockeying for cabinet positions. With 77 MPs to choose from, Trudeau and his brain trust have no shortage of talent to consider.

Word has it that Trudeau is looking to appoint new Ontario MPs who come equipped with provincial cabinet experience from Queen’s Park.

And while Naqvi and Coteau are both visible minorities, Trudeau is looking to honour his commitment to maintaining gender parity in the cabinet. As a result, Lalonde and Jaczek’s prospects look strong, with the advantage going to Lalonde — an effortlessly bilingual Franco-Ontarian.

Ien and Kayabaga are both Black women with compelling personal stories. Ien was a successful CTV journalist before besting Green Party Leader Annamie Paul in a Toronto byelection one year ago, and again in this year’s election. She represents an incredibly diverse riding that has traditionally enjoyed cabinet representation.

Kayabaga’s appointment makes sense for myriad reasons. She represents a swing riding the Liberals must hold and boasts a unique story: the 30-year-old came to Canada as an 11-year-old refugee after her family fled Burundi during that country's civil war.

Kayabaga grew up in social housing and brings government experience, having served as a London city councillor since 2018. She’s also a francophone who learned English as a child in Canadian public schools. Lastly, Kayabaga’s appointment would fill a regional void, as southwestern Ontario has lacked cabinet representation since Trudeau swept to power six years ago.

Taylor-Roy is a Harvard graduate armed with a gold-plated CV, having worked for the World Bank and the highly regarded management consulting firm McKinsey and Company. Trudeau was heavily invested in her candidacy, visiting Taylor-Roy’s York Region riding on numerous occasions throughout the campaign as she battled, and ultimately knocked off, Liberal-turned Conservative MP Leona Alleslev.

Lastly, Sahota’s appointment makes sense for a few reasons. Peel Region, a federal Liberal bastion, has been down one cabinet minister since former MP Navdeep Bains resigned from cabinet last January. Elected in the Liberal sweep of 2015, Sahota has been a solid constituency MP, and it’s thought she’s being strongly considered to be Brampton’s new voice in Ottawa.

Trudeau’s Liberals elected relatively few MPs west of Ontario, but they did restore representation in Alberta after being shut out of that province in the 2019 election. As a result, both that province’s Liberal MPs are likely shoo-ins for cabinet.

Randy Boissonnault (Edmonton Centre) will enter the executive as a senior minister. He ticks just about every box imaginable: a Rhodes Scholar, a previous MP with parliamentary secretary experience, openly gay, and a Franco-Albertan to boot. As a consequence, it’s hard to see how Boissonnault won’t command tremendous influence in this government.

Finally, there is George Chahal (Calgary Skyview), a popular former Calgary city councillor of Punjabi origin. Chahal was considered to be a sure-bet for Trudeau’s executive until Calgary Police Service’s anti-corruption unit recently announced it was investigating him over a doorbell camera video that appeared to show Chahal removing a flyer for his opponent from a constituent's door on the eve of the election.

There are few certainties in politics, and the precise make-up of the new cabinet is far from a certainty. But for those who have studied this prime minister’s political brand and approach to governing, it’s evident Trudeau’s next cabinet will be hugely consequential — both to his personal brand and to his ability to cement his political legacy over the coming mandate.

Whether this cabinet sinks or swims will have a material impact on Trudeau’s political success in the medium to long term. That alone will be fascinating to observe over the coming years.

Did we remember a large

Did we remember a large province on the West Coast that surely deserves the Minister of Fisheries and Oceans position at least. What... third in population and possibly the only "HAVE" province remaining in the equalization program? Oh yes I have forgotten.... the end of the earth where it drops into the unknown abyss is at the western boarder of Alberta....sorry I forgot.

GTA centricity is cliche in Canada. And with writers like Perez the cliche fits like a surgical glove.

It is so very frustrating --

It is so very frustrating -- but oh too commonplace -- that a Toronto-based writer would ignore the election results in British Columbia altogether in his focus on a mere two seats in Alberta. In fact, his language reeks of dismissal, and it isn't a big stretch to assume that the writer probably subscribes to the wilfully ignorant notion that Alberta IS the West. As if.

The federal Liberals elected 15 MPs in Metro Vancouver alone, well over half of all seats in the city. Several were in the suburbs, the "905" of Vancouver that defied conventional wisdom that suburbia is supposed to be exclusively conservative. Several of these seats resulted in senior cabinet and parliamentary positions in the 2015 and 2019 Lib governments, and will no doubt keep contributing to building the nation.

Let's not also forget that the Lib's minority partner, the NDP, also elected 13 MPs from BC. Together they form a majority in parliament. Without BC's contribution to these two governing parties, Trudeau would have lost the election.

Dismissing BC's electoral contribution to the confederation is like cutting off your right hand.