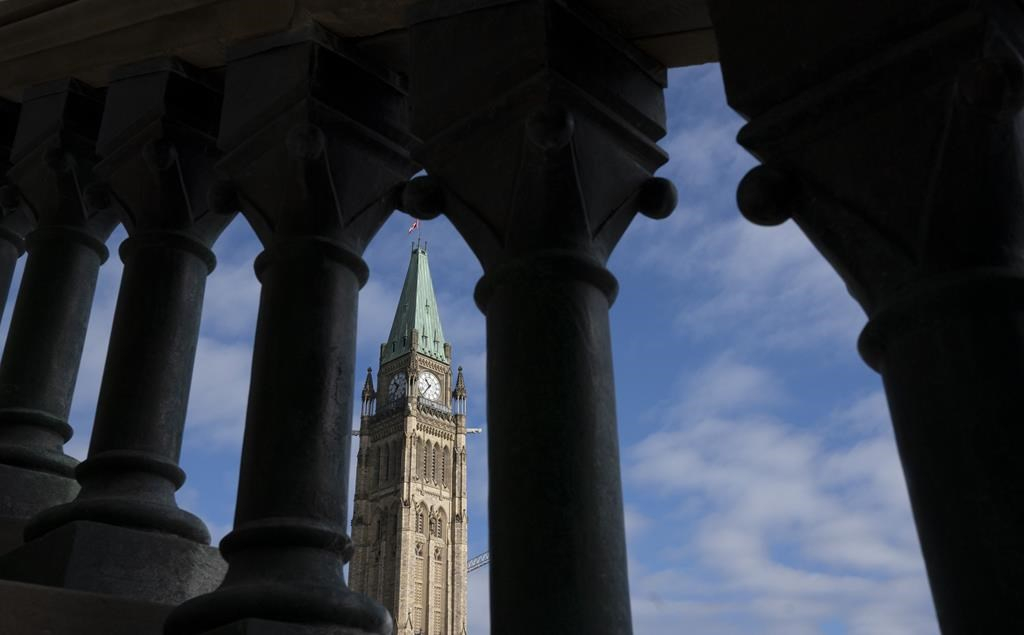 The Peace tower is seen on October 5, 2021 as politicians begin returning to work in Ottawa. File photo by The Canadian Press/Adrian Wyld
Previous story
Next story

A federally commissioned report looking at vendors who sold billions of dollars in goods to the government found the vast majority lacked adequate policies to prevent human and labour rights risks in their supply chains.

The report recommends several ways the government can work with suppliers to avoid complicity in human trafficking, forced labour and child labour, such as favouring companies with a clear understanding of the problems and appropriate policies to address them.

The report was completed for the government in May by Rights Lab, a multidisciplinary group knowledgeable about human trafficking, based at the University of Nottingham in England.

The Canadian Press used the Access to Information Act to obtain a public copy — as well as a heavily censored, classified version — and an internal briefing note summarizing the government's intended response.

"Canada is taking a leading position by exposing its procurement to this scrutiny — an important and required first step," the report says. "This enables effective learning and creates the visibility and foundations necessary for improvement."

The federal government acknowledges that the global nature of supply chains means there is a risk the goods it buys have been produced using forced labour or human trafficking.

Since receiving the report findings, the government has updated its Code of Conduct for Procurement to incorporate human and labour rights expectations for vendors and their sub-contractors.

In January, Ottawa announced new measures to address human rights abuses in Xinjiang, China, including an approach to defend the rights of Uyghurs and other ethnic minorities.

The public Rights Lab report does not single out individual companies or countries.

The group examined general identification codes for goods — from textiles and clothing to electronics and lighting equipment — to determine those at highest risk of exposure to rights abuses.

It included Public Services and Procurement Canada's contract history from April 2017 to September 2020 in the analysis.

The authors then zeroed in on the three largest vendors by spend value from each of 13 high-risk codes as well as the 20 largest vendors in the dataset by contract value. There was some overlap in these categories.

Of the 48 vendors examined, only five demonstrated thorough acknowledgement of human rights risks in their supply chains and had acted upon them through policies likely to be effective, the report says.

Thirty-eight did not make any reference to human and labour rights risks in their supply chains on their websites or in any published documents.

Two sellers mentioned such risks in various publicly available places, but had no concrete, published policy or procedures to address them.

Another three vendors had developed policies or procedures that were judged unlikely to work in practice.

It says the policy should be expanded into a "due diligence strategy," with suppliers aware the government highly prioritizes prevention of labour exploitation.

Pre-qualification requirements at the bidding stage should commit suppliers to engaging with the policy, and to providing their own policies and procedures to deal with risks, it says.

"Contracts should be awarded to suppliers with appropriate policies and who have demonstrated sufficient understanding of supply chain risks related to human rights violations."

Vendors should provide more information, including product country of origin and the geographical distribution of their supply chain, the report adds.

In addition, the government could offer training to vendors and require them to uphold the revised code of conduct, as well as build federal capacity to investigate high-risk supply chains.

Lack of transparency and engagement should lead to ineligibility as a vendor and cancellation of contracts already in place, the report also recommends.

The briefing note, prepared by Public Services and Procurement Canada, says the department's acquisitions program has been:

— preparing materials to communicate the results of the risk assessment to vendors;

— identifying data gaps with a view to collecting and tracking additional information from vendors; and

— determining requirements for a specific government procurement policy and due diligence strategy.

The federal department had no immediate update on its activities.

In parallel with the report, the department carried out a consultation with interested parties on procurement risks.

"Increasing awareness, particularly with respect to complex, global supply chains, remains an ongoing challenge," says a report on that effort.

The results suggest most vendors "have not mapped their supply chains and are unaware of risks related to forced labour and human trafficking."

The consultation also revealed a need to give vendors access to tools and resources to meet supply chain expectations within the code.