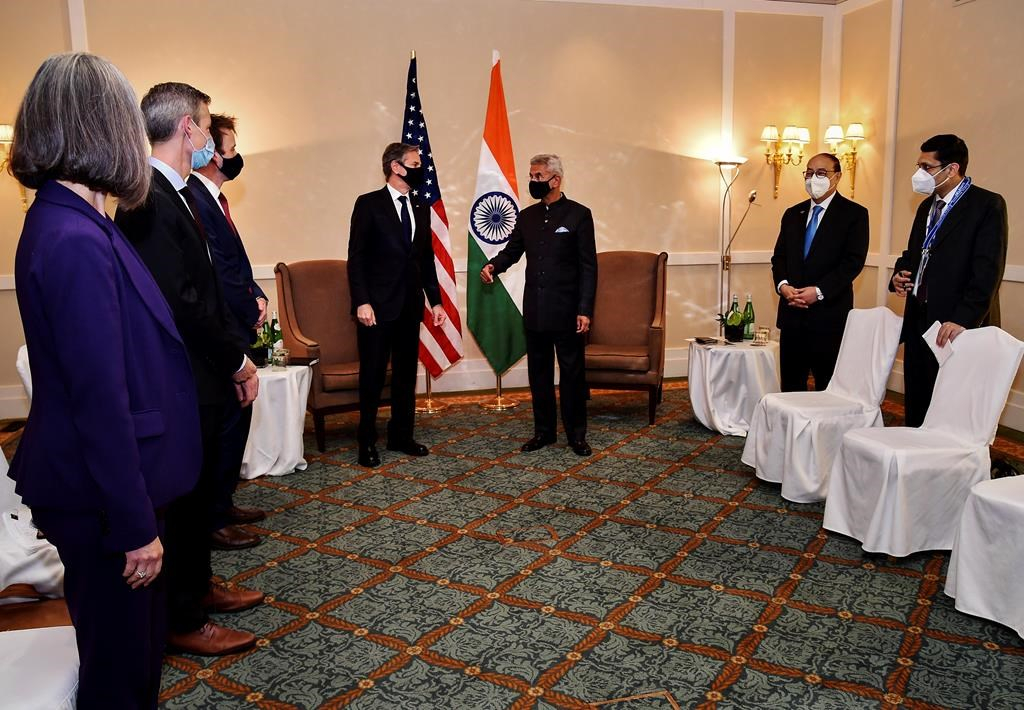 US Secretary of State Antony Blinken, fourth from left, and India's Foreign Minister Subrahmanyam Jaishankar, third from right, meet at an hotel in Rome, on Saturday, Oct. 30, 2021. Photo by The Associated Press/Andreas Solaro, pool
Previous story
Next story

Leaders of the world's biggest economies on Saturday endorsed a global minimum tax on corporations, a linchpin of new international tax rules aimed at blunting the edge of fiscal paradises amid skyrocketing profits of some multinational businesses.

The move by the Group of 20 summit in Rome was hailed by U.S. Treasury Secretary Janet L. Yellen as benefiting American businesses and workers.

G-20 finance ministers in July had already agreed on a 15% minimum tax. It awaited formal endorsement at the summit Saturday in Rome of the world’s economic powerhouses.

Yellen predicted in a statement that the deal on new international tax rules, with a minimum global tax, “will end the damaging race to the bottom on corporate taxation.”

“Here at the G20, leaders representing 80% of the world's GDP — allies and competitors alike — made clear their support for a strong global minimum tax,” the president said in the tweet. “This is more than just a tax deal — it's diplomacy reshaping our global economy and delivering for our people.”

Here at the G20, leaders representing 80% of the world’s GDP – allies and competitors alike – made clear their support for a strong global minimum tax. This is more than just a tax deal – it’s diplomacy reshaping our global economy and delivering for our people.

The agreement aims to discourage multinationals from stashing profits in countries where they pay little or no taxes. These days, multinationals can earn big profits from things like trademarks and intellectual property. These companies can then assign earnings to a subsidiary in a tax haven country.

Briefing reporters midway through the summit, German Chancellor Angela Merkel said: "There are good things to report here. The world community has agreed on a minimum taxation of companies. That is a clear signal of justice in times of digitalization.”

Mathias Cormann, secretary-general of the Paris-based Organization for Economic Cooperation and Development, said that the deal clinched in Rome “will make our international tax arrangements fairer and work better in a digitalized and globalized economy.”

The minimum rate “completely eliminates the incentive for businesses around the world to restructure their affairs to avoid tax,” Cormann contended.

On other issues crucial to fairness across the globe — including access to COVID-19 vaccines — the summit on the first of its two days heard pleas to boost the percentage of those in poor countries being vaccinated.

Italian Premier Mario Draghi made a sharp call to pick up the pace in getting vaccines to poor countries.

Family photo of the #G20 Heads of Delegation attending the #G20RomeSummit with a group of health personnel struggling against the COVID-19. pic.twitter.com/zvCUnf2S3p

Draghi, the summit host, said Saturday that only 3% of people in the world's poorest countries are vaccinated, while 70% in rich countries have had at least one shot.

“These differences are morally unacceptable and undermine the global recovery,” said Draghi, an economist and former chief of the European Central Bank.

French President Emmanuel Macron has pledged to use the summit to press fellow European Union leaders to be more generous in donating vaccines to low-income countries.

But advocates of civil society which have held discussions with G-20 officials said suspension of vaccine patents was crucial to increasing access in poor countries.

Canada noted it was both sharing vaccines as well as donating money to develop production in South Africa, which is a G-20 country. Chrystia Freeland, deputy prime minister, said Canada was increasing its commitment to international vaccine sharing through the COVAX program by donating 200 million doses.

The summit is also confronting two-track global recovery in which rich countries are bouncing back faster.

Rich countries have used vaccines and stimulus spending to restart economic activity, leaving the risk that developing countries that account for much of global growth will remain behind due to low vaccinations and financing difficulties.

Macron has told reporters he expects the G-20 to confirm an additional $100 billion to support Africa’s economies.

On the urgent problem of climate change, Italy is hoping the G-20 will secure crucial commitments from countries responsible for about 80% of global carbon emissions — ahead of the U.N. climate conference that begins Sunday in Glasgow, Scotland, just as the Rome summit winds down.

Most of the G-20 leaders will head to Glasgow.

Presidents Vladimir Putin of Russia and Xi Jinping of China, whose efforts to reduce emissions are paramount to combating climate change, were participating remotely in the Rome summit.

But midway through the summit it was the corporate tax rate rule that dominated.

White House officials say the new tax rate would create at least $60 billion in new revenue a year in the U.S. — a stream of cash that could help partially pay for a nearly $3 trillion social services and infrastructure package that Biden is seeking. U.S. adoption is key because so many multinational companies are headquartered there.

But Civil 20, which represents some 560 organizations from more than 100 countries in a network making recommendations to the G-20, was less enthusiastic. The 15% rate is “a little more than those (rates) we'd consider fiscal paradises,” Civil 20 official Riccardo Moro told reporters following the summit.

Nicole Winfield contributed to this report.