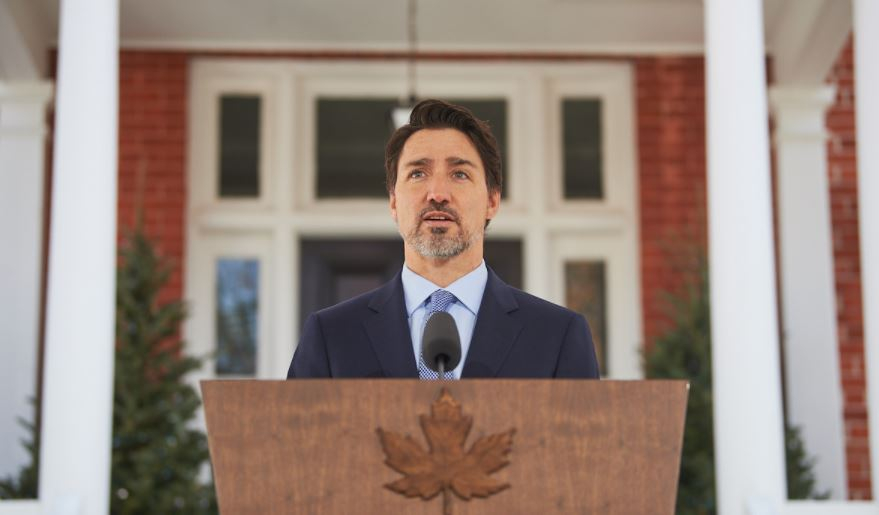 As Justin Trudeau looks ahead to governing, he has put together a cabinet of loyalists who will no doubt help the prime minister cement his political legacy over the coming term in office, says Andrew Perez. File photo by Alex Tetreault
Previous story

The imagery surrounding the unveiling of Justin Trudeau’s new cabinet last week was fitting in many respects and stood in stark contrast to the swearing-in of the prime minister’s first ministry six years ago.

On that sunny November morning in 2015, Trudeau’s rookie cabinet strolled through the grounds of Rideau Hall as a team, smiling and greeting the large crowds that had assembled outside the Governor General’s official residence. The imagery was unmistakable as the new prime minister literally basked in the sunshine of that fall morning while promising “sunny ways” — an inspiring and collaborative approach to government after a decade of Stephen Harper’s iron-fisted rule.

The lineup of neophyte cabinet ministers was equally inspiring: the finance minister was a successful CEO, the health minister a distinguished physician, the justice minister an Indigenous lawyer, the defence minister a decorated soldier, and the transport minister a celebrated astronaut.

All but one have since left Trudeau’s cabinet, whether by choice or not. The only one that remains — Harjit Sajjan — is battered and might never rebound politically.

Last week, there were no “sunny ways” — quite literally and figuratively. Ministers arrived at the swearing-in ceremony one by one, traversing the grounds of Rideau Hall alone with their families, umbrellas in tow on a dreary, rainy October morning. With the pandemic not yet over, most donned masks, leading to media confusion as to who was who.

This cabinet’s formation was not an exercise in building a new team designed to kick off a new government, but more about damage control, plugging holes due to electoral defeats and poor performances, and caucus management.

Despite outward appearances, it was not all doom and gloom inside Rideau Hall. The new cabinet showcased 38 ministers, including 19 women, seven visible minorities, one Métis, and three LGBTQ+ individuals. It’s objectively the most diverse cabinet in Canadian history, and for that, the prime minister deserves praise.

But what was more stunning was the nature of the roles assumed by women in this cabinet — and not the fact Trudeau continues to honour his 2015 commitment to gender parity around the cabinet table.

Women run the lion’s share of the most powerful government departments in Ottawa, including the Deputy Prime Minister’s Office, Finance, Foreign Affairs, Defence, International Trade, Employment and Workforce Development, and Treasury Board.

It’s a historic first in this country, where until relatively recently, female ministers typically assumed non-economic portfolios like Canadian Heritage, Health, and International Development — all notably held by men in this ministry.

Opinion: As Justin Trudeau looks ahead to governing, he has put together a cabinet of loyalists who will no doubt help the prime minister cement his political legacy over the coming term in office, writes @andrewaperez. #cdnpoli #elxn44

While this cabinet boasts unprecedented diversity along gender, ethnic, and sexual orientation lines, it’s not regionally balanced and does not include the distinct voices that would push this prime minister to question some of his assumptions and approaches to governing.

Cabinet representation in Canada tends to be concentrated in seat-rich Ontario and Quebec, but this ministry takes that convention to a whole new level, with 26 of the 38-member cabinet hailing from those two provinces. To add insult to injury, Manitoba and Alberta were given a mere junior-level minister each, while Saskatchewan — with no Liberal MPs — remains shut out of the executive.

It’s true Manitoba and Alberta only elected six Liberal MPs in total, but there is no reason why two ministers from each province responsible for significant portfolios should not be appointed to Trudeau’s cabinet. Indeed, it was the case when the prime minister swept to power in 2015 and rightly appointed Alberta ministers Kent Hehr and Amarjeet Sohi, and Manitoba ministers Jim Carr and MaryAnn Mihychuk to influential roles.

Southwestern Ontario has also been neglected in this cabinet as a result of Waterloo MP Bardish Chagger’s exclusion from the executive. A woman of colour, and among Trudeau’s most ardent loyalists, it remains a mystery why Chagger was dropped from her role as minister of diversity and inclusion and youth. As a consequence, the region that stretches almost four hours along the 401 from Kitchener-Waterloo-Cambridge, through London to Windsor will go without cabinet representation.

It’s a region of the country that continues to face unique economic challenges, particularly in light of the aftermath of the 2008-09 global financial crisis that disproportionately impacted southwestern Ontario, decimating the manufacturing base that fuelled its economy. Its impacts continue to linger to this day, where job creation and income growth lag other Ontario regions.

It’s incomprehensible that a region whose population exceeds the entire population of Atlantic Canada would be shut out of the federal cabinet while the Greater Toronto and Hamilton Area claims a whopping 14 ministers.

Trudeau’s cabinet — for all its impressive heavyweights — also lacks diverse and new voices. While this government should justifiably be proud of its progressive record and ambitious policy agenda, there are virtually no discernable ideological differences among this crop of ministers.

The few more-centrist ministers serving in Trudeau’s last cabinet have all been dismissed or demoted: Marc Garneau, Carr, and Seamus O’Regan. As the former minister of natural resources, O’Regan brought energy and enthusiasm to the role where he was generally viewed as a strong defender of Canada’s oil and gas sector by industry stakeholders. But in last week’s shuffle, O’Regan was sworn in to the low-profile Labour Ministry — a clear demotion.

One would be hard-pressed to find a minister in this cabinet who would conform to the “business Liberal” label — a moniker long used to describe business-oriented and fiscally conservative Liberals. While Trudeau’s cabinet has always been dominated by centre-left “social Liberals,” there were a group of ministers in the prime minister’s first cabinet who hailed from the party’s more centrist wing, including the likes of Scott Brison, Ralph Goodale, Bill Morneau, Carr, and Garneau — all of whom now find themselves outside cabinet or government altogether.

But a genuine diversity of perspectives around the cabinet table is integral to good government and effective policymaking. The governments of Jean Chrétien and Paul Martin from 1993 to 2006 included a healthy mix of business and social Liberals in their cabinets, ultimately leading to policy decisions that were reflective of the diverse needs and interests of different regions and sectors of the economy.

During the Chretien-Martin era, business-friendly ministers like Anne McLellan, John Manley, and Roy MacLaran didn’t always win their battles around the cabinet table with their more left-leaning colleagues, but their presence at the highest levels of government led to decision-making that took different perspectives into consideration around the value of fiscal responsibility, economic competitiveness, and the role of business.

There is also political urgency for having different voices represented in a Liberal cabinet. The party has long been a coalition of diverse interests, including those of business. As Erin O’Toole’s Conservatives continue their move to the centre of the political spectrum, it’s incumbent on the Liberal Party to not lose sight of its more centrist elements of support across the country.

As Trudeau looks ahead to governing, he has put together a cabinet of loyalists who will no doubt help the prime minister cement his political legacy over the coming term in office — one that might be his last.

Many of the changes made to the prime minister’s executive last week can be seen through the lens of championing more women in influential roles, damage control for underperforming ministers, and leadership succession.

Trudeau was successful in promoting more women to heavyweight roles, while for the most part managing to reassign weak performers within cabinet. The major promotions of Anita Anand and Melanie Joly — while they suit the prime minister’s political interests — suggest Trudeau might be seeking to even out the playing field with presumed front-runner Chrystia Freeland when a leadership contest eventually takes place.

But in spite of its many undisputed strengths, the new Liberal cabinet does not adequately represent every region of the country and fails to showcase diverse voices within the caucus that would be more likely to challenge Trudeau’s blind spots in government. The prime minister may come to regret these unforced errors before too long.