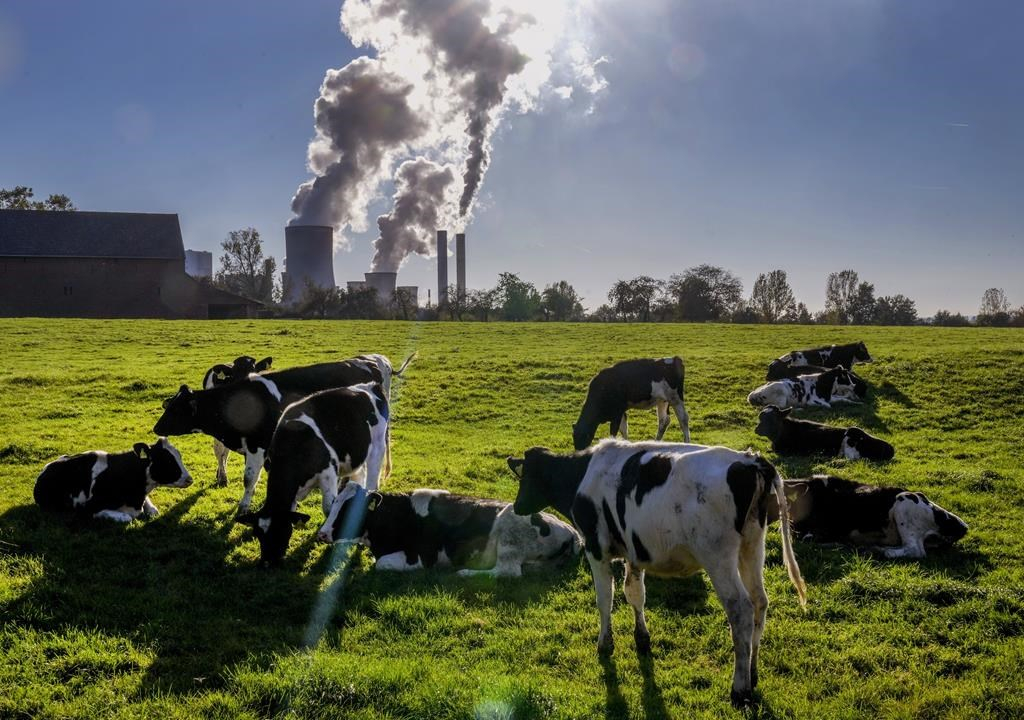 Cows gather near the coal-fired power station in Niederaussem, Germany, on Oct. 24, 2021. Global carbon pollution this year has bounced back to almost 2019 levels, after a drop thanks to the pandemic lockdown. (AP Photo/Michael Probst, File)
Previous story
Next story

The dramatic drop in carbon dioxide emissions from the pandemic lockdown has pretty much disappeared in a puff of coal-fired smoke, much of it from China, a new scientific study found.

A group of scientists who track heat-trapping gases that cause climate change said the first nine months of this year put emissions a tad under 2019 levels. They estimate that in 2021 the world will have spewed 36.4 billion metric tons of carbon dioxide, compared to 36.7 billion metric tons two years ago.

At the height of the pandemic last year, emissions were down to 34.8 billion metric tons, so this year's jump is 4.9%, according to updated calculations by Global Carbon Project.

While most countries went back to pre-pandemic trends, China’s pollution increase was mostly responsible for worldwide figures bouncing back to 2019 levels rather then dropping significantly below them, said study co-author Corinne LeQuere, a climate scientist at the University of East Anglia in the United Kingdom.

With 2020's dramatically clean air in cities from India to Italy, some people may have hoped the world was on the right track in reducing carbon pollution, but scientists said that wasn’t the case.

“What the carbon emissions numbers show is that emissions (correcting for the drop and recovery from COVID19) have basically flattened now. That’s the good news,” said Pennsylvania State University climate scientist Michael Mann, who wasn’t part of the report. “The bad news is that’s not enough. We need to start bringing (emissions) down.”

Emissions in China were 7% higher in 2021 when compared to 2019, the study said. By comparison, India’s emissions were only 3% higher. In contrast, the United States, the European Union and the rest of the world polluted less this year than in 2019.

LeQuere said China’s jump was mostly from burning coal and natural gas and was part of a massive economic stimulus to recover from the lockdown. In addition, she said, China's lockdown ended far earlier than the rest of the world, so the country had longer to recover economically and pump more carbon into the air.

The “green recovery” that many nations have talked about in their stimulus packages take longer to show up in emission reductions because rebounding economies first use the energy mix they already had, LeQuere said.

The figures are based on data from governments on power use, travel, industrial output and other factors. Emissions this year averaged 115 metric tons of carbon dioxide going into the air every second.

Breakthrough Institute climate director Zeke Hausfather, who wasn’t part of the study, predicts that “there is a good chance that 2022 will set a new record for global CO2 emissions from fossil fuels.”

By Alexander C. Kaufman | News | November 24th 2020
Reports from the Race to a Safer World