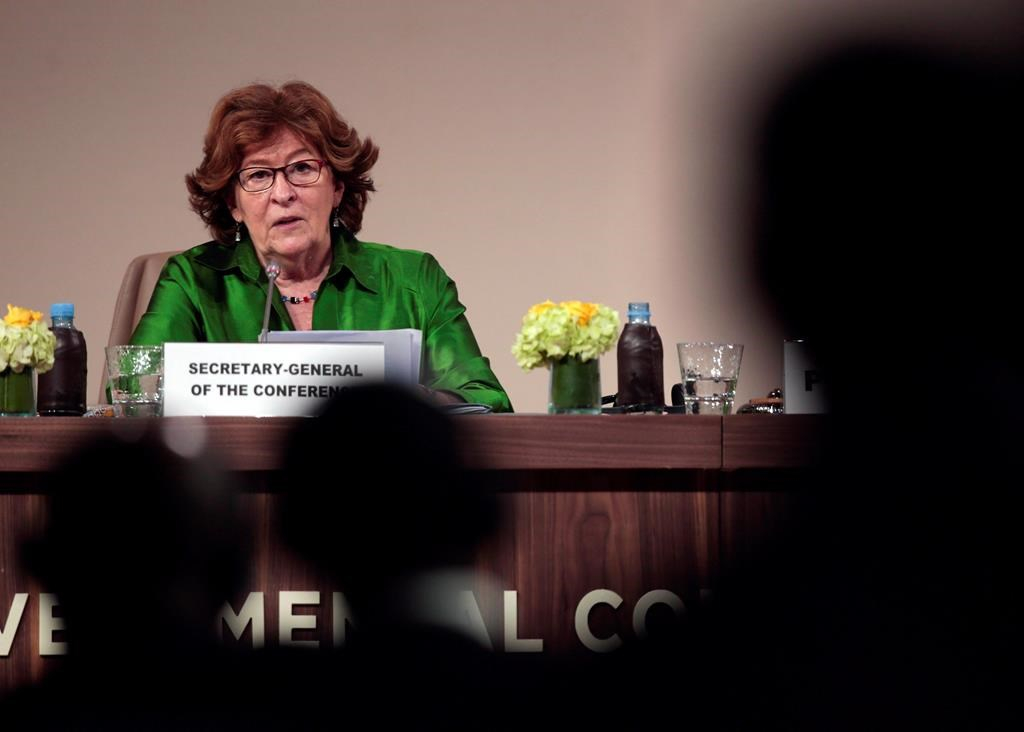 Louise Arbour speaks during a press briefing after the closing session of UN Migration Conference in Marrakech, Morocco, on Tuesday, Dec. 11, 2018. File photo by The Associated Press/Mosa'ab Elshamy
Previous story
Next story

In one of her first acts as Canada’s new defence minister, Anita Anand announced Thursday she had accepted a retired Supreme Court judge’s recent call to transfer the investigation and prosecution of military sexual misconduct cases to civilian authorities.

Delivered just over a week after she became only the second female defence minister in Canadian history, Anand’s announcement was met with cautious optimism but also questions from some who have long called for the military to stop being allowed to police itself.

The government tapped Arbour in April to lead a yearlong review of sexual misconduct in the ranks and recommend ways to address it. The move followed months of allegations against some of the military’s top officers, and criticism of the Liberals’ handling of the issue.

In her letter to Sajjan, who served for six years as defence minister and is now minister of international development, Arbour said those allegations and others “have led me to conclude that immediate remedial actions are necessary to start restoring trust in the CAF.”

To that end, she recommended all criminal cases of a sexual nature, including historical cases, be referred to civilian authorities. That includes cases currently under investigation, unless that investigation is nearly complete.

“I believe it is necessary to establish a process that will facilitate the handling of allegations of sexual offences in an independent and transparent way outside of the CAF,” she said in the Oct. 20 letter.

Arbour’s recommendation only deals with criminal cases, including sexual assaults. It does not apply to non-criminal cases such as inappropriate relationships, which are not allowed in the military will continue to be dealt with as a disciplinary issue.

She also left open the door to changing the recommendation pending the results of her final report.

Shortly after the Canadian Press report, Anand took to Twitter to announce she had accepted “in full Madame Arbour's recommendations to move the investigation and prosecution of sexual misconduct cases to the civilian system.

I have accepted in full Madame Arbour's recommendations to move the investigation & prosecution of sexual misconduct cases to the civilian system. pic.twitter.com/ZD8Hr6bF9c

“The Canadian Armed Forces are working with federal, provincial and territorial partners to implement these interim recommendations.”

Anand’s announcement sparked a firestorm of reaction from opposition parties, legal and defence experts as well as It’s Not Just 700, an advocacy and support group for victims of military sexual misconduct, which in a statement said it was “cautiously optimistic.”

“Words may soothe, but action matters, so only once we see this rollout can we feel the voices of those harmed are heard,” it said.

Opposition parties were more forceful, with Conservative defence critic James Bezan demanding a timeline while NDP counterpart Lindsay Mathyssen asked why it took the Liberal government so long to act.

Mathyssen noted two other retired Supreme Court justices had made similar recommendations in the past.

Following a comprehensive review of the military justice system, Morris Fish in June said the investigation and prosecution of sexual assaults should be temporarily removed from the military’s hands until a declaration of victims’ rights is implemented.

The government and military said at the time that they had accepted the recommendation in principle, but further study was needed.

Prior to that in 2015, Marie Deschamps had asked that victims be allowed to file complaints with civilian authorities if they wanted.

In her letter to Sajjan, Arbour wrote she had heard opposition to Fish’s recommendation, including worries civilian authorities don’t know enough about the military and that cases could be delayed and result in less severe sentences for perpetrators.

Arbour did not identify who made those comments, but they echo past statements from military officials.

“On the other hand, I have heard, in the course of my review, significant skepticism on the part of stakeholders and most importantly survivors, with respect to the independence and competence of (military police),” Arbour wrote.

Retired colonel Michel Drapeau, who has long advocated for the government to strip the military of its jurisdiction over sexual assault and other criminal cases, which was only granted in 1998, welcomed Anand’s announcement.

He added that he did not have any concerns about the military continuing to deal with non-criminal incidents, saying in an email that military police and the military justice system are both “quite capable to investigate and prosecute disciplinary or ethical offences.”

Several experts on military sexual misconduct noted the civilian justice system has also faced difficulties in dealing with sexual offences, while it wasn’t immediately clear who would ultimately decide whether an allegation was of a criminal nature or not.

“Plus to what extent will the CAF accept other authorities investigating in their midst?” said Charlotte Duval-Lantoine of the Canadian Global Affairs Institute. “It might make the ranks tighter.

“It looks like a quick fix, and in some ways it is, but if we want to have this work, there are a lot of questions that have to be addressed.”

PM blasts top military brass on sexual misconduct, saying they 'don't get it'