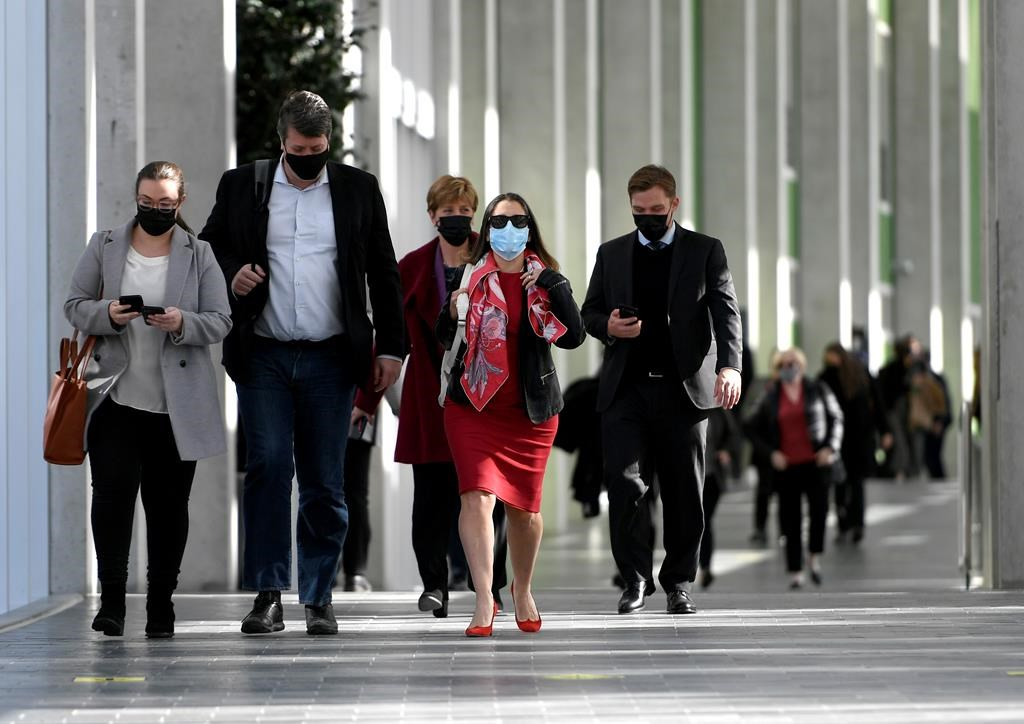 Deputy Prime Minister and Minister of Finance Chrystia Freeland leaves a cabinet meeting, a day after federal ministers were sworn in, in Ottawa on Wednesday, Oct. 27, 2021. File photo by The Canadian Press/Justin Tang
Previous story
Next story

Holland, speaking outside the first Liberal caucus meeting since the September election, downplayed the suggestion the Liberals are negotiating any kind of formal agreement with any other party, including the NDP.

"Look, I appreciate speculation but that’s not what we’re in the business of," Holland said.

The Liberals were re-elected for the third time but with the second straight minority mandate, leaving them without the guarantee of getting legislation through the House of Commons they would have had if they'd won another dozen seats.

It means, like in the last session, they need to find a dance partner if they're to make Parliament work. Holland said they aren't limiting their discussions on that front to any one party.

"Look, we're talking with each and every one of the parties about our common agendas and what we can get done for Canadians," he said. "And the prime minister has had conversations with his counterparts and other parties. I'm doing the same for myself. We have a very aggressive agenda to get to in the next coming weeks and that's what we're focused on."

Former House leader Pablo Rodriguez, now the minister of heritage, said reaching out a hand to all parties was how they handled it in the last Parliament.

Prime Minister Justin Trudeau spoke with each other party leader in late October, and in each conversation the areas of common ground were perused. But it is no secret that the NDP is the party with which the Liberals share the most, and certainly in the last Parliament, the NDP was the party from which the Liberals did get the most backing.

Heading in to Monday's caucus meeting, some Liberal and NDP MPs were musing about the possibility of formalizing that arrangement, and some informal discussions between some senior officials from both sides centred on what both sides wanted.

But at the moment, a formal arrangement is not in the cards from either party's perspective. Instead, the discussions will be on a case-by-case basis as every bill is introduced and debated.

Holland said the Liberal priority is legislation to extend COVID-19 benefits. On Oct. 21, Finance Minister Chrystia Freeland announced the benefit programs for individuals and businesses would be adjusted, so wage and rent supports would go only to businesses still extremely hard hit by the pandemic — namely hospitality and tourism — and individual income supports would be targeted only at workers whose jobs disappear because of a public health-enforced lockdown.

Holland said legislation to make it a crime to harass or block hospital workers outside their place of employment is also at the top of their list.

NDP Leader Jagmeet Singh has previously indicated that he would be prepared to work with the Liberals on policies both parties agreed on, because he wants to work across party lines to get things done.

But right out of the gates, the NDP's support for the new benefits plan isn't guaranteed. Days after the Liberals announced it, Singh accused the government of abandoning people who need help in the middle of the pandemic.

He has asked for the Canada Recovery Benefit to be reinstated, providing income support to a wider number of people.

Singh has also set out a wish list for co-operation with the Liberals including action on housing, dropping a court battle over compensating Indigenous children and tough steps to curb climate change.

Conservative Leader Erin O'Toole railed against the idea of an agreement between the New Democrats and Liberals, calling it "radical."

O'Toole told a news conference Monday that the deal would entail "billions of dollars of new spending to buy Jagmeet Singh's silence."

Trudeau greeted his new caucus for the first time with a big smile and the welcome relief of a more normal meeting than has happened since before the pandemic. About 100 of the 158 sitting Liberal MPs attended in person, with about three dozen more dialing in virtually.

The future of hybrid sittings is still in discussion, said Holland, though the Liberals favour the idea. But he confirmed the first day will be in person to elect a Speaker.

Trudeau told his caucus that the government will seek to heal divisions across the country by delivering for Canadians.

He warned Liberal MPs that anger and polarization are "creeping into our discussions in all sorts of different ways."

He said the best "antidote" to this is a bold program of action, including on housing and climate change.

"Our job is to stay focused on Canadians," he said. "Our job is to deliver for people in a time of uncertainty and fatigue. Our job is to be our very best as we step up in all the ways I know we can to deliver the kind of present and future I know Canadians need," he added.

This report by The Canadian Press was first published Nov. 8, 2021.