By Morgan Sharp | News, Next Gen Insider | November 9th 2021
#76 of 99 articles from the Special Report: COP26: Uniting the World to Tackle Climate Change 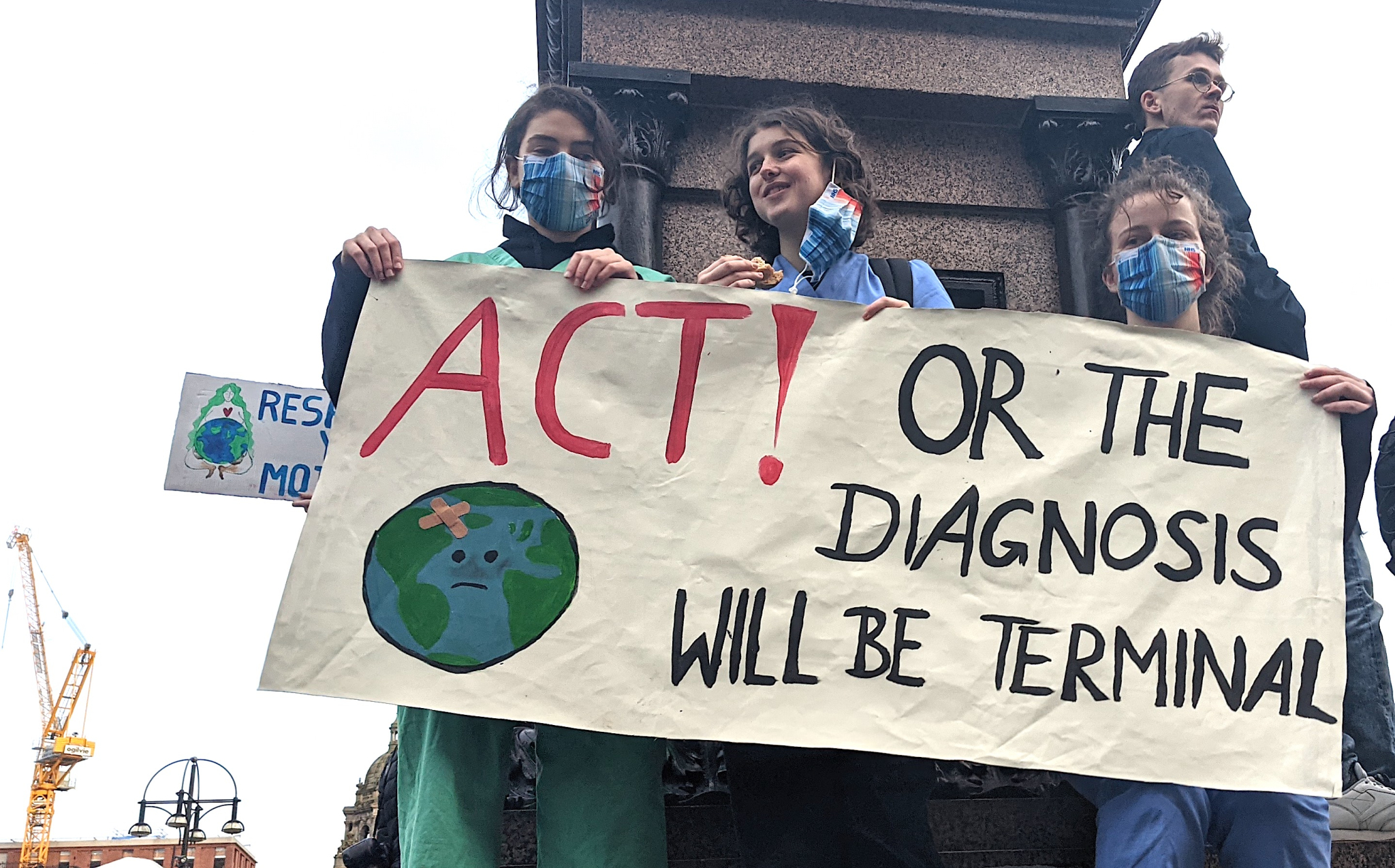 A group of medical students join thousands of other climate strikers on the streets of Glasgow on Friday, Nov. 5, 2021. Photo by Morgan Sharp / Canada's National Observer
Previous story
Next story

While floods and other extreme weather events take up most of the popular attention on climate change’s health impacts, some medical students want to learn, and in turn teach, that it goes much further than that.

Vidya Anathakumar, a 21-year-old medical student at the University of Glasgow, says we often hear about global heating and floods but not the specific related health problems; where failed crops create food shortages that weaken people’s immune systems, for example, or diseases like malaria get longer seasons and spread easier and farther from their historical homes near the equator.

“All of this has a really big impact on people’s health and also their mental health,” she said, just to the left of the stage where Greta Thunberg and a string of Indigenous, youth, and labour representatives were taking turns speaking to the assembled crowd at a climate rally last Friday. “I’m here protesting because the climate crisis is a health crisis. And that’s something that’s not really spoken about enough.”

She said an understanding that climate change may already directly affect patients and their families could encourage more medical professionals to speak in support of climate action.

Medical students are typically encouraged to take a dispassionate, professional position at odds with social justice causes, she said.

“There’s quite a culture in medicine of ... there isn’t enough advocacy,” she said. “It’s just a big privilege for us to be educated on this stuff, and it kind of feels like we should be educating more people.”

A group of students is trying to pressure medical schools to do just that, producing a Planetary Health Report Card that uses five metrics to compare how schools do on teaching about the climate crisis, including the curriculum, amount of interdisciplinary research in health and the environment, community outreach and advocacy, support for student-led initiatives, and sustainability.

McGill, the only Canadian medical school currently included with U.S. schools and others in the U.K. and Ireland in the rankings, got mostly Cs and the occasional B in the latest report.

The health sector worldwide accounts for 4.6 per cent of greenhouse gas emissions while creating 10 per cent of the global gross domestic product, the World Health Organization (WHO) said Tuesday as it announced 50 countries had pledged to make their health-care systems more “climate-smart.”

Vidya Anathakumar, a 21-year-old medical student at the University of Glasgow, says we often hear about global heating and floods but not the specific related health problems. #Health #ClimateCrisis #COP26 #COP26xCNO

The U.S. and the U.K. were among those that signed the agreement, but Canada was not.

The WHO explained that all 50 would seek climate resiliency in health care, and 45 committed to make their health systems more sustainable. Fourteen, including the U.K., set a target date to reach net-zero carbon emissions on or before 2050.

For the National Health Service (NHS) in England, that means a zero-emission fleet, including an ambulance capable of travelling 300 miles before being charged, and a net-zero building standard it would apply to an existing commitment to build 48 new hospitals before 2030, the U.K. government said.

The WHO was co-hosting the COP26 health program with the U.K. government, the UN Framework Convention on Climate Change, and health groups such as Health Care Without Harm.

Anathakumar said a local concern in Glasgow is that a sea-level rise expected by 2030 could raise the Clyde River enough to inundate parts of the city and threaten its sewage system during a flood, which could taint drinking water and encourage the spread of disease.

“I think having strong, resilient communities and groups of mutual aid, which started springing up in [the COVID] lockdown, that really helps because a lot of these effects are going to affect the poorest people and people in lower demographic areas,” she said.

“If you have people who know each other and take care of each other, and actually care beyond the capitalist idea of using people for needs, I think that would really help. People supporting each other.”