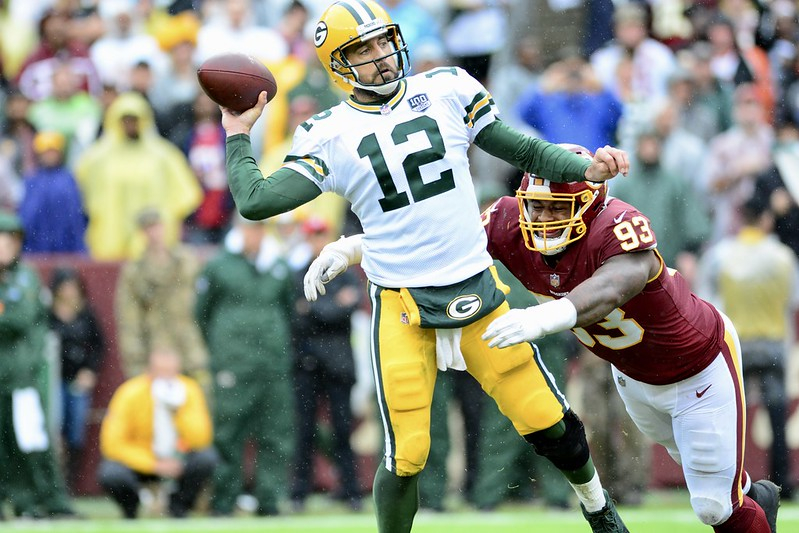 Aaron Rodgers wears No.12 for the Green Bay Packers in the National Football League. He tested positive for COVID-19 last week and revealed he has not been vaccinated. Photo by All-Pro Reels / Flickr
Previous story

Aaron Rodgers is not your average professional athlete. Sure, he’s a quarterback for the Green Bay Packers, but he also did a commendable job as fill-in host on Jeopardy! and even indicated he would have been willing to take the full-time gig. That’s why the revelation last week that he trades in some of the dumbest COVID-19 conspiracy theories came as a shock to millions of people.

In a recent podcast appearance, Rodgers touched on virtually every piece of vaccine-related nonsense in a five-minute spiel, from the alleged risks of infertility (there are none) to the claim that the political left was opposed to vaccines during the last year of Donald Trump’s presidency (it wasn’t).

“I’m somebody who’s a critical thinker,” he said. His willingness to validate the unfounded fears of millions of unvaccinated Americans will almost certainly get a few of them killed by the virus, but he lives in a country where people routinely privilege their own freedoms over their responsibility to others.

What’s most worrying here is that this me-first mentality is creeping across the border and beginning to infect Canadians as well. Look no further than the House of Commons, where a group of 15 to 30 Conservative MPs and senators led by Sarnia MP Marilyn Gladu are forming a so-called “civil liberties caucus” that will stand up for the rights of unvaccinated Canadians. The Hill Times’s Abbas Rana has reported: “The group chose ‘civil liberties’ as a name because they believe Canadians who don’t want to be vaccinated are not getting fair treatment, and losing their jobs is a violation of their rights.”

That Erin O’Toole is apparently willing to tolerate this shows just how weak his hold on the party’s leadership really is, and how unwilling he is to stand up to its far-right flank.

Opinion: Conservatives in Canada continue to place the rights of people who haven't taken a COVID-19 vaccine over their responsibilities to everyone else — including health-care workers, writes Max Fawcett #canpoli #vaccines

Sadly, he’s not alone there. In Ontario and Quebec, the conservative premiers backed down in the face of resistance from unvaccinated health-care workers and announced they won’t be making vaccinations mandatory for them after all. Premiers Doug Ford and Francois Legault both cited the potential impact of thousands of health-care workers walking off the job, with Ford suggesting his province’s decision was informed by “real-world evidence here in Ontario and across Canada.”

It’s not entirely clear which real world he’s referring to here. Take New York, where a Nov. 1 mandatory vaccination deadline was met with threats of widespread service disruptions from public sector employees, along with noisy protests from unvaccinated members of the ranks of the city’s firefighters, police officers and sanitation workers. The city called their bluff, and so far it seems to be working. Despite union leaders predicting that as many as 10,000 police officers would leave rather than get vaccinated ahead of the deadline, only 34 were placed on unpaid leave.

For some reason though, Conservatives in Canada seem completely incapable of summoning that sort of resolve. Instead, they continue to privilege the rights of the unvaccinated over their responsibilities to everyone else, including health-care workers who are caring for the sick. And the more they roll over in the face of this me-first attitude, the more they embolden and empower it.

Yes, millions of Americans are happy to continue prioritizing individual rights over collective responsibility, even if it comes at the cost of many thousands of dead people. But here in Canada, we need our elected officials to do a better job of reminding people their freedoms aren’t absolute, and they need to think of each other as well as themselves.

If you’re not willing to get vaccinated against COVID-19, you have no business being a health-care provider. If anything, vaccine mandates will serve as a useful long-term test for our public institutions, since the people they lose as a result of them are no real loss.

But if and when the Conservative Party of Canada’s “civil liberties caucus” decides to try and enter Parliament, its leader can’t sit by idly and watch. Erin O’Toole will need to pick a side: does he stand with the other parliamentarians who are abiding by the shared set of rules that govern their behaviour, or the scofflaws who put their own views and values ahead of them? His answer here will speak volumes, and not just about the future of his own leadership.

Obama blames Russia and China for lagging on climate policy

Good news all around,

Good news all around, conservatives showing who they are and what they REALLY "think" for all to see, yet AGAIN. But how many times do we have to see this crazy parade before we call it what it is and spurn it completely?
Marilyn Gladu and Leslyn Lewis aren't far from Marjorie Taylor Green status, nor is their evangelicalism far from QAnon.

Mr Fawcett, my common law partner is an emerg doc in BC. The two institutions she works at have recently lost nurses due to their refusal to get vaccinated. I can agree with much of what you say here however your statement that "since the people they lose as a result of them are no real loss," is just as stupid and single minded a partisan statement as anything right wing conservatives say. These people are a real loss both as a healthcare resource in a extremely overworked system that we all need and as otherwise congenial colleagues who my partner truly enjoyed working with. Dismissing the the painful reality of situation is unhelpful.

Mr. Falk, I've been wondering something, and you and your partner might be in a position to respond. What if all the healthcare workers who refuse to be vaccinated had to undergo -- before being put on leave -- a professional development program to help counter the misinformation they've received via social media that has likely led to their "vaccine hesitancy"? It could include a review of the history of vaccination (a lot of younger people don't realize -- or conveniently forget -- the contributions that vaccines have made to our longevity), a review of the science behind vaccines in general and the Covid-19 vaccine in particular, a review of the statistics and math behind the epidemiology of Covid-19, a review of risk management, a review of professional ethics (what does "First, do no harm" mean? etc.), a review of scientific concepts like peer review and weight of evidence, but most especially a critical look at the false claims ripping around social media.

From my work as a climate change activist, I know that knowledge alone won't convince deniers (or in this case refusers, as a short form). So these professional development programs could also include seminars with sociologists and psychologists who could help shed light on identification with cultural values, which leads to cultural polarization, a phenomenon whereby "ordinary members of the public credit or dismiss scientific information on disputed issues based on whether the information strengthens or weakens their ties to others who share their values. At least among ordinary [people], individuals with higher science comprehension are even better at fitting the evidence to their group commitments" (Yale study concludes public apathy over climate change unrelated to science literacy, 2012).

I guess what I'm wondering is whether healthcare workers who have made the choice (consciously or subconsciously) to identify with vaccine refusers can be encouraged to re-identify with their healthcare community of membership instead. Does that make sense? (Sorry for any unfair assumptions I've made here. It's a tiring and depressing time as we're in the middle of COP26 -- a sort of refusapalooza of world leaders who refuse to take a stand against fossil fuels.)

I disagree. I look at like a doctor who decides that washing his/her hands is a personal choice before surgery. And, no, the analogy is not extreme. Both scenarios put those at risk in much more risk.