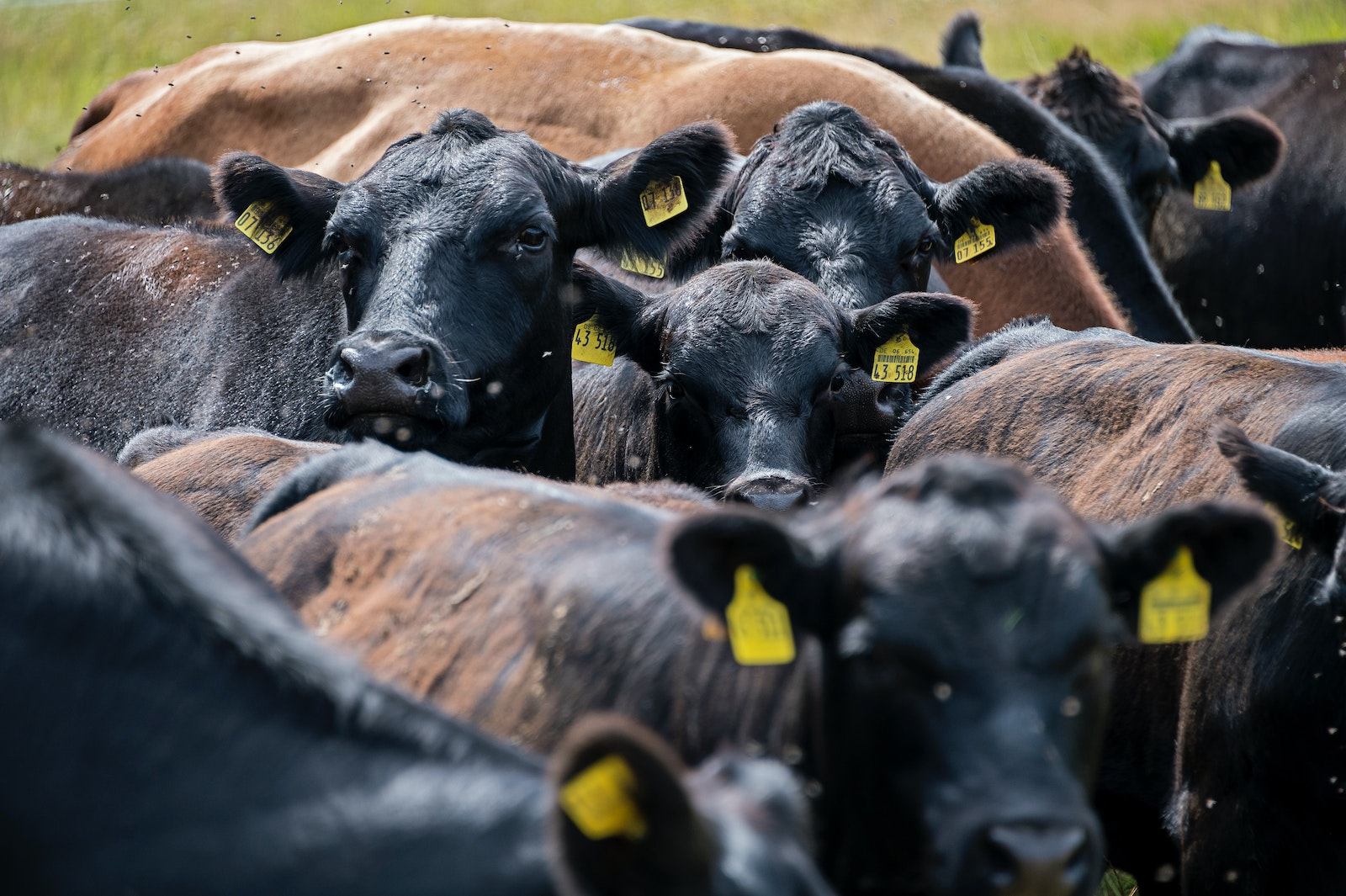 Every day around noon, the smell of grilled beef and roasted venison wafts through the lines of delegates attending the COP26 climate conference as they queue for lunch. Yet even as hundreds flock to the burgers and venison pasties on offer, some attendees wonder if meat — a big emitter of greenhouse gases worldwide — should be on the menu.

"Protein isn't really on the (COP26) agenda," said Sophie Armour, communications manager for the Good Food Institute, an organization that promotes so-called "alternative meats" like plant-based burgers or lab-grown steaks. "There is some talk about food, but nowhere near enough in proportion to the amount of emissions it causes."

COP26 — short for the 26th conference of parties to the UN's climate change agreement — has brought together leaders from around the world to Glasgow, Scotland, for two weeks to find ways to limit global warming.

Reducing meat consumption is widely recognized as one of the most effective ways for people to reduce their carbon footprint, especially in wealthier countries like Canada. But whether these reductions are best gained by countries spending millions to create new alternative meats or by encouraging people to eat less meat and making livestock farming more sustainable remains an open debate.

Meat — particularly beef — is responsible for about 20 percent of the world's emissions, according to a September study in the journal Nature. Industrial livestock farming is particularly harmful, with feedlots and the excessive use of artificial fertilizers on feed crops major sources of greenhouse gas emissions.

Concern over these environmental impacts has led to growing hype for alternative meats, particularly in wealthy countries like Canada and the U.S. Over the past decades, dozens of companies have jostled to produce plant-based burgers or grow steaks and salmon fillets in a lab, including major players like Maple Leaf Foods and Cargill. In the past year alone, research by the Good Food Institute found the value of the U.S. alternative meat industry soared to $7.8 billion, more than doubling compared to 2019.

To really take off, Armour said the industry needs governments to invest at least 10 per cent of funds meant to reduce agricultural emissions towards developing alternative meats. That includes a portion of the $4 billion the U.S. announced last week it will spend to boost "climate-smart" farming practices.

Others take a more cautious tone.

"We can't replace one problematic way of farming with another," said Tiffany Traverse, a Secwepemc farmer from northern B.C. representing Canada's National Farmers' Union (NFU) at COP26. The soy, peas, and other legumes used to make most plant-based meats are typically still grown using harmful industrial techniques, she said. The high cost of the processing equipment used to produce them also means farmers and communities will still need to rely on large companies that can afford these machines for their food.

"We need to move away from confined animal feeding operations," added Saskatchewan grain farmer and NFU representative Glenn Wright. "Integrating animals on the land and doing rotational grazing ... makes a lot more sense. Is it possible our total domestic livestock herd will decrease a bit? Maybe, but that doesn't worry me because we've got a third of our food that's wasted right now. It's a question of being more efficient."

How do we get off beef? Fake meat producers say they're the best option. Others disagree. #COP26 #COP26xCNO #plant-based food #ClimateAction

For instance, farming techniques like rotational grazing, or moving animals around a pasture to prevent them overgrazing and using livestock to fertilize fields, are powerful tools to reduce emissions, he said. However, these so-called "regenerative" techniques requires more labour and time and are difficult for many farmers to adopt without government support.

Alternative meats could be a tool to reduce emissions, he said, but allocating funds to help farmers use sustainable techniques and regulating the industry to ensure it is serving farmers and communities is more important.

Advocates want countries to focus on integrating agroecology into their plans to reduce agricultural emissions. Agroecology is an approach to farming that promotes biodiversity and communities' food sovereignty. It is opposed by big agribusinesses who fear it will threaten their bottom line.

The approach was tentatively included in draft recommendations for inclusion in the final text of the UN Framework Convention on Climate Change (UNFCCC). The move was opposed by countries that rely heavily on industrial farming, including Canada and the U.S., said Teresa Anderson, climate policy director for ActionAid International.

However, countries participating in the negotiations agreed to single out industrial livestock farming as a major contributor to climate change. That could make it easier for countries to implement restrictions domestically on harmful meat production, she added.

"It's a real shame this is often pitted as a zero-sum game…. We're all trying to work towards a system that shifts us away from industrial agriculture," she said. "Demand for meat isn't going away, and if we can satisfy some of the growing demand for it with plant-based or cultivated options and then you've got regeneratively farmed meat complimenting that, it feels like the most sustainable approach of all."

This article does not even

This article does not even touch on the animal cruelty that is very very prevalent in meat/dairy industry. The vegan movement is very concerned with animal suffering/abuse.
WHY is this concern not at least part of the conversation? IT IS GLARINGLY MISSING? We must address all concerns to find solutions and I am very disappointed in this report not being fair and just to public concern regarding animal welfare. There is a alot of public outcry that is suspiciously missing from this article....how come?

Part of the vegan movement

Part of the vegan movement latched on to cruelty to animals. But it's by no means the biggie for anyone who's been vegan (or even vegetarian) for more than a couple of decades.
The issue of the moment is sustainable diets, I'd say, rather than any of the host of additional reasons espoused by vegans.
I'm a bit dismayed at what's being promoted as a "need for alternative meats." There *is* no need for meat(s), alternative or otherwise. There is a plenitude of varieties of plants that are delicious either as is or combined (without factory processing), to make luscious things to eat that meat-eaters by and large have not found the impetus to use instead of meat.
I think the best answer, still, to, "Well, what do you eat instead of meat?" is, "Why, all those things you eat meat instead of."
The whole apology story for meat consumption centres around the idea that it is necessary to eat meat ... on the climate side, it focusses on the climate cost of transporting it, while the bigger part is the diversion of plants from human diets to diets of cows and pigs. On the health side, there's no argument available against the downsides of eating more than a very small amount of meat.
On the aesthetics side of things (including animal cruelty) is that very few people are comfortable killing animals themselves, or even watching the process.
The reason it's not a Big Issue all over is that there is only a small portion of society that doesn't accept the idea that animals are there for us to eat and kill. Perhaps the worse issue is raising animals for the sole purpose of killing them.
But we're not too worried, either, as a society, about people being killed. If we were, there'd be no more war, no more refugee camps, no more broken promises when "allied" forces and their embassies abandon local employees when they make plans to move out of "lost" territory.
And where's the big public outcry at the huge number of kids in Canada going to bed tonight hungry. Or beaten up. Or without shelter.
We've all got our pet hobby horses. But the overriding COP issues have to do with climate impacts. I personally am delighted that reducing petroleum production will necessarily also reduce the amounts of a whole lot of toxics in air, earth/food, and water, even though it won't likely happen in my lifetime. In the same way, reducing meat consumption will reduce factory farming ... and all the evils that go along with it.

My concern over factory

My concern over factory farming cruelty is not "A hobby horse" concern of
mine... it us much more than that. Cruelty to all living beings, animal or humans is a critical world issue and needs to be part of every conversation when tacking our survival as a species...climate change action includes and requires all unethical practices ( let's face it these industries are fully aware of " their harm" to our planet) towards people, animals and our environment to be addressed as solutions.and I truly believe to be MORE SUCESSFUL we must collectively address everything and stop settling and giving industries /corporations so much latitude for excuses and doing little or nothing to be part of the action necessary to deal with the CRITICAL EMERGENCY THE WORLD IS FACING .....they (we)owe it to next generation .