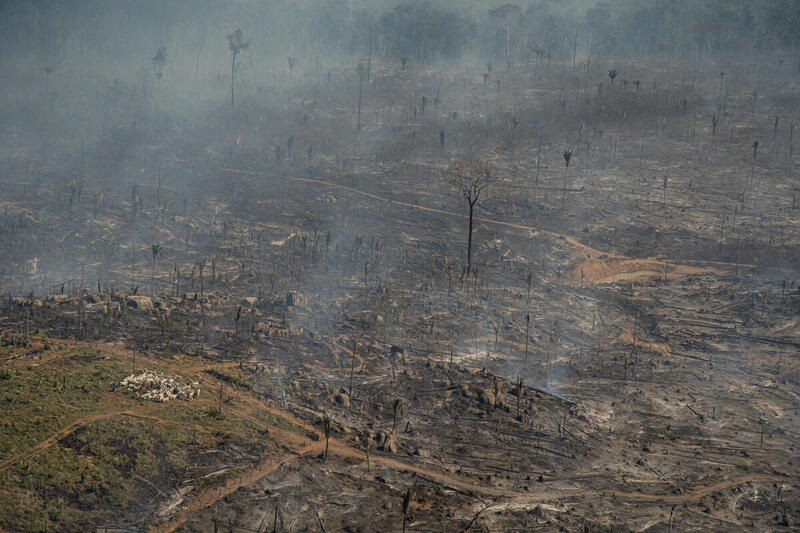 Rampant deforestation, trampling of Indigenous rights, scorching fire seasons — Canadians may think of the goings-on in Western Canada, but these injustices also characterize a dire crisis unfolding more than 7,000 kilometres to our south. Now, with Mélanie Joly named as our new foreign affairs minister and the UN Climate Change Conference COP26 happening in Glasgow, Scotland, Canada has an opportunity and responsibility to push for decisive action.

From August 2020 to July 2021, the Amazon lost an area about the size of Yellowstone National Park to deforestation. In Canadian terms, that’s roughly equivalent to cutting a one-kilometre-wide path from Halifax to Vancouver — and back again. This is the second-largest annual amount the Brazilian Space Research Institute’s tracking system has recorded since its implementation in 2015.

This data was just released as the rainforest enters its “fire season,” the peak period during which land grabbers, cattle ranchers and others intentionally set fires to clear land for industrial agriculture and beef production.

Now, instead of pushing for climate action in the region, Canada is moving ahead with a free trade agreement with Brazil that threatens to pour gasoline on the blaze.

The agreement would increase imports to Canada linked with the deforestation of the Amazon rainforest. One estimate from Brazil’s Confederation of Agriculture and Livestock has the trade deal increasing export revenues of agricultural products by $9.7 billion, including as much as $1.8 billion annually in meat products from Brazil.

A flood of cheap beef from Mercosur countries (Brazil, Argentina, Uruguay and Paraguay) appears to have the Canadian meat industry worried. Also in the meeting notes, the federal government says it is well aware of this risk and will “continue to support Canadian beef producers as negotiations move forward.” It should be worth noting the Canadian beef industry faces its own scrutiny for disproportionately high contributions to our country’s greenhouse gas emissions and inhumane working conditions for its workers.

In attendance at the meeting between the federal government and the meat industry was JBS Foods Canada, one of two beef companies that control almost all the meat processing in Canada. The head company, JBS S.A., is the largest beef slaughterhouse in Brazil. Past Greenpeace investigations found numerous incidences of cattle raised on recently deforested land and then sold to large Brazilian meatpackers like JBS, and to international supply chains. So increasing beef exports from this region will very likely mean Canada increasing its deforestation footprint in the Amazon.

Beef production is the leading cause of deforestation and fires in the Amazon, contributing to ecosystem destruction throughout the entire region — including in the Pantanal wetlands and Cerrado savanna in Brazil, and the Gran Chaco forest in Argentina. Brazil is the world’s top beef producer after the U.S. and Argentina is the sixth-largest producer, and new documents reveal both countries lobbied the UN to delete or change passages in Intergovernmental Panel on Climate Change (IPCC) reports that recommend reducing meat consumption to cut greenhouse gas emissions.

Some nations in the EU — like France, Ireland, and Austria — have said they will block parliamentary ratification of their Mercosur deal with Brazil until they secure Amazon protections from Bolsonaro.

Opinion: Instead of pushing for climate action to protect the Amazon, Canada is moving ahead with a free trade agreement with Brazil that threatens to pour gasoline on the blaze, writes @Bmwei. #AmazonRainforest #ClimateAction

And yet, so far, Prime Minister Justin Trudeau has not committed to halting talks.

Far from the first match Canada has lit in the Amazon

If Canada were to move forward with the Mercosur deal, it would hardly be the first match we’ve lit in the Amazon’s increasingly parched and scorched soils. This year, new data showed Canadian companies hold the greatest share of foreign investment in energy and mining projects in the Amazon — many of which have serious Indigenous rights implications.

Mining, along with fires and deforestation, have accounted for the loss of habitat for two-thirds of species in the region, including for up to 85 per cent of threatened species. And for the first time, parts of the Amazon are emitting more carbon than they are absorbing due to deforestation and climate change.

The Amazon is at what scientists call a “tipping point,” beyond which the ecosystem will no longer be able to sustain itself and collapse, shifting from rainforest to degraded savanna and shrub land — and releasing massive amounts of carbon in the process.

This as the Bolsonaro government continues to advance a suite of legislation that could lock in Amazon deforestation for years to come, including granting land title to those responsible for recent illegal deforestation in public lands, and opening up Indigenous lands to mining and industry.

For Canada to keep engaging in negotiations would be legitimizing and rewarding the Bolsonaro government’s destructive policies — which have just been accused of crimes against humanity in a complaint to the International Criminal Court.

Three opposition parties — the NDP, Bloc Québécois and Green Party — have taken a position against signing the Mercosur trade deal under the current circumstances. So have a number of human rights activists, farmers, and environmentalists. The Liberal government, meanwhile, continues to pursue a trade deal with Bolsonaro.

The 2021 election is behind us, and while the composition of Parliament may seem unchanged, the conditions of the Amazon demand new protective action. Joly needs to hit the ground running.