Guilbeault confronted about his past anti-nuclear stance 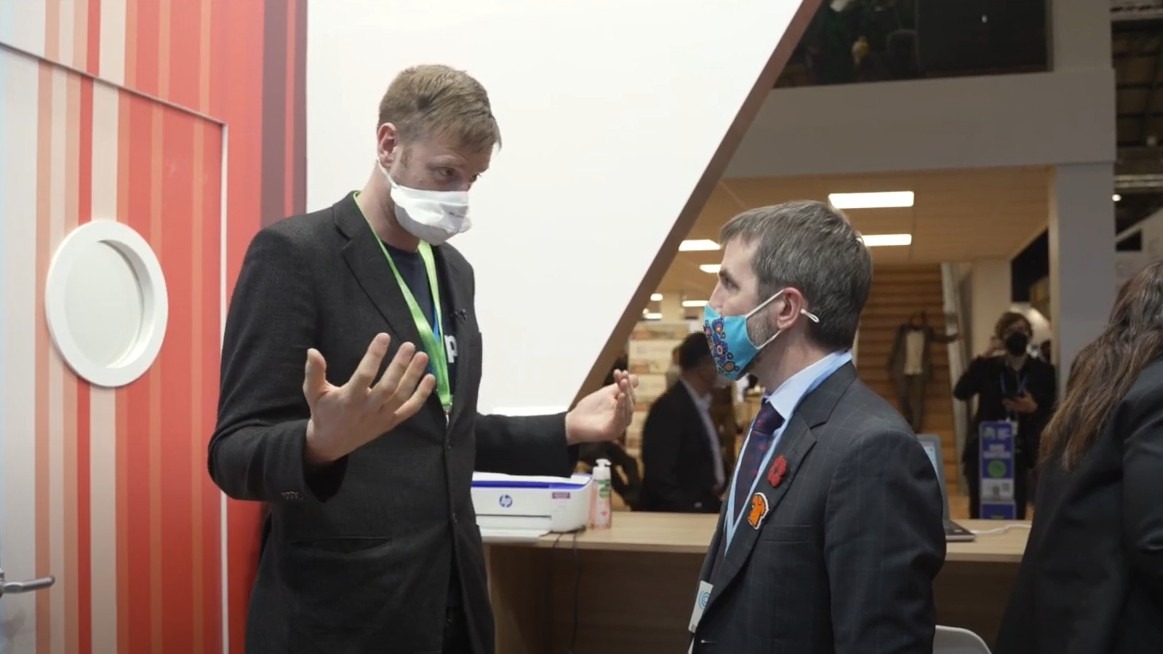 President of Canadians for Nuclear Energy Chris Keefer confronts Minister of the Environment and Climate Change Steven Guilbeault about his anti-nuclear stance at the UN climate conference in Glasgow, Scotland. Photo via Decouple Podcast / Youtube
Previous story
Next story

A pro nuclear energy campaigner confronted Canada’s new environment minister at the UN climate change conference in Glasgow Wednesday and tried to grill him about the anti-nuclear stance he held before entering politics.

Chris Keefer, president of Canadians for Nuclear Energy (C4NE) asked Steven Guilbeault whether he has reevaluated his anti-nuclear stance in light of analysis by the Intergovernmental Panel on Climate Change’s (IPCC) that suggests an increase in nuclear energy is in keeping with 1.5 C.

Guilbeault skirted the question, stating, “It won’t be up to government to decide which technologies will flourish” but will be up to the market and “I’m supportive of what my government is trying to do, which is find the best technologies.”

In 2018, Guilbeault tweeted that “it's time to close Pickering #Nuclear Plant and go for #renewables.” Before running for federal office, he was involved with Greenpeace for ten years and was a founding member of Équiterre, both two organizations that oppose nuclear energy.

Keefer described Guilbeault’s answer as “very evasive,” and an attempt to “try and hide his anti-nuclear ideology and (possible) anti-nuclear agenda.”

If Guilbeault still opposes the development of more nuclear power sources in Canada he’ll be at odds with his own party’s policy on the power source.

The federal government signalled its support for nuclear power when it invested millions of dollars in small modular reactors or SMRs, and the party’s climate plan, A Healthy Environment and a Healthy Economy, touts SMRs as a way to help decarbonize heavy industry.

Former natural resources minister Seamus O’Regan openly supported nuclear power. Keefer says as a minister in one department Guilbeault, won’t be able to dictate all the energy and climate policies. However, Keefer says he is concerned Guilbeault will bring “ideological commitments” into his role as environment minister.

These are not the only scenarios laid out in the report though. It notes that, “Many scenarios … project an increase in the use of nuclear power, while others project a decrease.”

In fact, some 1.5 C pathways it describes “no longer see a role for nuclear fission by the end of the century.”

The report says the pace at which nuclear energy is currently deployed is hindered by fears of accidents and radioactive waste management.

In Canada, environmental groups, three political parties and more than 100 women in leadership positions have objected to the development of nuclear power in Canada, citing concerns about the toxic waste it produces, and lack of options for dealing with it, as well as long construction timelines that threaten to miss the short window of time left to address the climate crisis.

A survey from October indicated Canadians in the Toronto area are concerned about how radioactive waste is stored.

When residents across the Greater Toronto Area (GTA) were asked if a new nuclear reactor should be built in the GTA before establishing a permanent safe storage facility for nuclear waste, 82 per cent said no, according to a survey conducted by Oraclepoll Research Ltd. The poll was commissioned by the Ontario Clean Air Alliance, a provincial group that led the campaign to phase out coal power in Ontario and is now pushing for a 100 per cent renewable electricity system.

Keefer is of the mind that, “Waste is not an issue we need to deal with immediately,” and can be dealt with after the urgent problem of climate change is addressed.

He says with more funding the sector could pursue technology that would result in nuclear byproducts with less longevity.

Another solution for the nuclear waste problem, he says, is storing waste in something called a “deep geological repository,” which is a network of underground tunnels and placement rooms for used nuclear fuel containers constructed several hundred metres or more below the surface in a stable rock formation.

These solutions are not without “challenges and problems from an engineering perspective, but they're very solvable,” said Keefer.

This idea that we can solve the problem of nuclear waste down the line is not shared by Brennain Lloyd, a public interest researcher and founding member of Northwatch, an environmental group in northeastern Ontario.

“If the last 40 years are any indication, the industry isn't doing a very good job of figuring that out,” she said. “They just keep banging away at the same old idea.”

She says much of her research focuses on nuclear waste and geological repositories.

“I first started working on this in the 1980s. And at that time, the industry was saying that there was an international consensus, that geological repositories … were the way to go in terms of dealing with radioactive waste in the long-term,” said Lloyd.

“That was in the 1980s. Here we are in the 2020s. And there is not a single operating geological repository for high-level (radioactive) waste anywhere in the world.”

She says the question isn’t if the repositories fail, but when, how much will be released, and what the effects will be.

Then, she says there are more immediate questions around environmental and health concerns when it comes to actually moving radioactive waste from dry storage into transportation containers.

Ultimately, nuclear gets in the way of renewables, “it’s expensive, slow, (and) it's prone to shut down” said Brennain.

“Nuclear occupies a big space in our grid… (that) means there is less incentive, less demand, less market room for renewables”

The problem with wind and solar, Keefer says, is that they “are intermittent power sources and require backup, and around the world that backup is coal and gas,” and therefore we need nuclear in addition to renewables.

There’s no doubt many environmentalists would agree with Keefer’s assertion that it’s bad to rely on coal and gas as a back-up for renewables, but with 2030 just around the corner and steep emissions reductions required worldwide, some, like Jack Gibbons, chair of the Ontario Clean Air Alliance, say the timelines don’t match up.

The IPCC report noted that the current time lag between the decision date and the commissioning of nuclear power plants is observed to be 10 to 19 years.

“We need to dramatically reduce our greenhouse gas pollution in the next 10 year,” said Gibbons. “New nuclear can't do that, because a new nuclear reactor can't be built in 10 years.”

COP26 in pictures and videos

It tells how much radioactivity, in watts, a tonne of uranium will have at different numbers of years after its service lifetime, in which it gave 38.5 thermal gigawatt-days, ends. (The tonne typically might give that much energy by going at 38.5 megawatts for 1,000 days. In this time, the electricity produced would be 13 megawatts, not 38.5, because of losses in converting heat to work.)

200 years is about seven generations. We can imagine our descendants at that time having to live with, like, 100 million tonnes of uranium like this, perhaps still above ground in millions of dry casks, maybe a couple of square miles of them, cooking away at 19.31 gigawatts.

COP26 is about heading off a slowly intensifying spent fuel crisis. Carbon dioxide and carbon monoxide are spent fossil fuel. Spent fuel tends to cause problems, but spent *nuclear* fuel never has, and the millions of casks represent enough energy production, in the crucial next 50 years, to reduce the fossil fuel trade to a few ornamental candles per family per year.

In that time, a small fraction of the energy those casks gave could readily power the removal all the excess atmospheric CO2 that is now in our air.

This is one of the better

This is one of the better pieces of Canadian climate reporting coming out of COP26. I had been considering subscribing to the National Observer for some time now, and because of this article, I just did. Keep it up!

The question was of limited

The question was of limited value and was meant to entrap. He might of well have asked Guilbeault if he is in favour of babies or cars. And it is too bad that Guilbeault gave such as pathetically political answer, instead of stating that the obvious negative impacts need to be addressed.