Busy time ahead for feds as Liberals introduce new bills 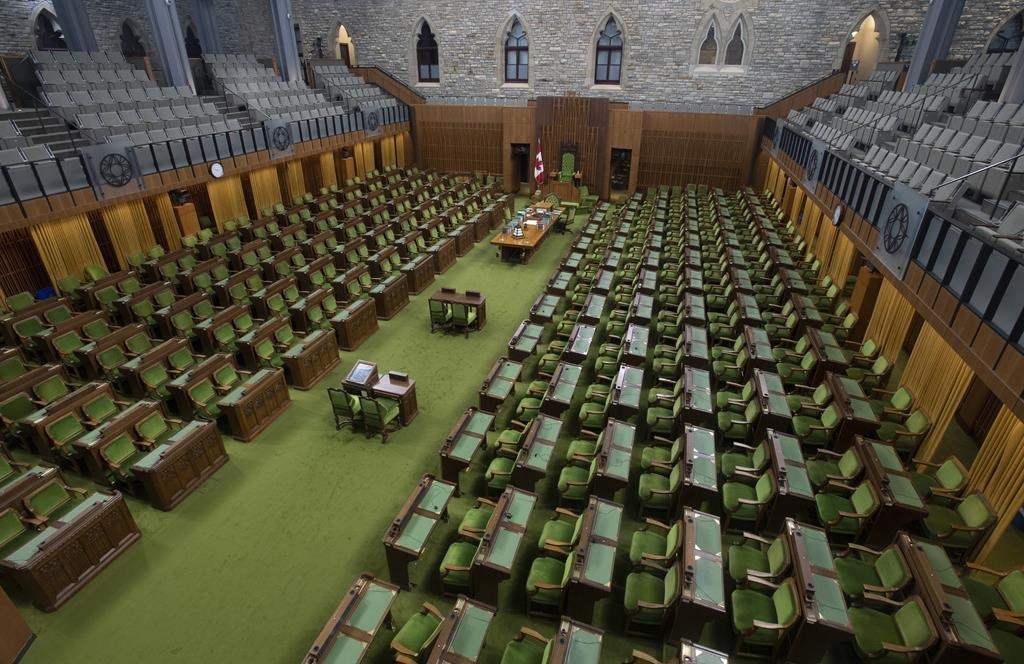 The House of Commons chamber is seen empty, on Wednesday April 8, 2020 in Ottawa. File photo by The Canadian Press/Adrian Wyld
Previous story
Next story

After getting off to an arguably slow start since winning re-election on Sept. 20, Justin Trudeau's Liberal government appears poised to go into hyperdrive with next week's resumption of Parliament.

The Liberals promised more than a dozen initiatives in their election platform — including the introduction or reintroduction of at least eight bills — within the first 100 days of a new mandate.

That 100-day clock started ticking on Oct. 26 as soon as the prime minister's new cabinet was sworn in.

The government will have lost almost 30 days by the time the new session of Parliament opens next Monday.

And it will have only 24 sitting days in which to get things done in the House of Commons before the clock runs out on Feb. 3 — with the first two days essentially lost since they must be devoted to electing a Speaker and delivering a throne speech.

The Commons is scheduled to sit for only four weeks before breaking for the holiday season on Dec. 17, and MPs won't return until Jan. 31.

If the Liberals intend to keep their promises for the first 100 days — and they insist they do — that spells a crammed legislative agenda for the few weeks the House will be sitting before the new year.

"We have a very aggressive agenda to get to in the coming weeks and that’s what we’re focused on," government House leader Mark Holland said last week following the Liberals' first post-election caucus meeting.

In addition to the eight platform-promised bills to be introduced by Feb. 3, the government is also preparing legislation to deal with two pandemic-related issues that weren't specifically mentioned in the platform.

The first would implement last month's announcement on more targeted emergency aid benefits for individuals and sectors hardest hit by the COVID-19 pandemic.

Holland indicated top priority will be given to passing that bill as quickly as possible.

Holland also signalled that priority will be put on passing a bill to impose criminal sanctions on anyone who blocks access to vaccine clinics, hospitals, testing centres and abortion clinics. It would also target anyone who intimidates or harasses health care workers, keeping a promise made by Trudeau as anti-vaccination protests ramped up during the campaign.

"Right now we want to make sure ... that we don’t see what happened before where health care professionals who are trying to be on the frontlines of this battle are dealing with protesters and being menaced by that," said Holland.

Privately, government officials are hopeful that opposition parties will recognize the urgency to swiftly pass those two bills, as they've done in the past with other pandemic-related legislation.

Because they hold only a minority of seats in the Commons, the Liberals will need the support of at least one opposition party to pass legislation or to limit debate and force a vote on a bill.

In a minority House, an opposition party can drag out debate for weeks simply by putting up more speakers and running out the clock. It can also impede the government agenda by deploying procedural delaying tactics.

The Conservatives routinely did both in the last Parliament, which was also a Liberal minority, on matters unrelated to the pandemic.

Only towards the end of last spring's sitting did the NDP and Bloc Quebecois support the Liberals in imposing closure to cut off debate and force votes on a couple of priority bills to ban conversion therapy and regulate web giants — but that came too late to get the bills through the Senate before the summer break and both died once Trudeau called an election in August.

Nevertheless, the government has signalled it's hoping this time that relatively quick progress can be made on at least two of the bills that the platform pledged to introduce within 100 days.

One would provide 10 days of paid sick leave for federally regulated workers, a measure triggered by the pandemic.

The other would be a reintroduced bill to ban the traumatizing practice of forcing a person to undergo "conversion therapy" aimed at altering their sexual orientation or gender identity. Although Conservatives spun out debate on the ban last time and more than half of them voted against it, it is strongly supported by all other parties.

Other promised bills could take a lot longer than 100 days to jump through all the legislative hoops. They include legislation to:

— Regulate foreign web giants to ensure they contribute to the creation and promotion of Canadian stories and music. A bill on this issue tabled in the last session proved controversial, with critics claiming it would wind up regulating what individuals post on social media.

— Strengthen the Official Languages Act and introduce an Act for Substantive Equality of French and English.

— Combat online hate, including hate speech, terrorist content, incitement to violence, child sexual abuse and non-consensual distribution of intimate images. Among other things, that would include making social media platforms accountable for the content they host.

— Reform the criminal justice system to address the disproportionate incarceration of Black and Indigenous people. That includes elimination of mandatory minimum sentences for less serious crimes and greater use of conditional sentences, such as house arrest, counselling or treatment, for people who do not pose a threat to public safety.

The platform also commits the government to a host of other non-legislative tasks within 100 days, including appointing a new federal housing advocate, holding a summit on restarting cultural industries, convening with provinces and territories to develop a national plan to legislate paid sick leave across the country, and launching a procurement process for development of a high frequency rail corridor between Toronto and Quebec City.

This report by The Canadian Press was first published Nov. 15, 2021.