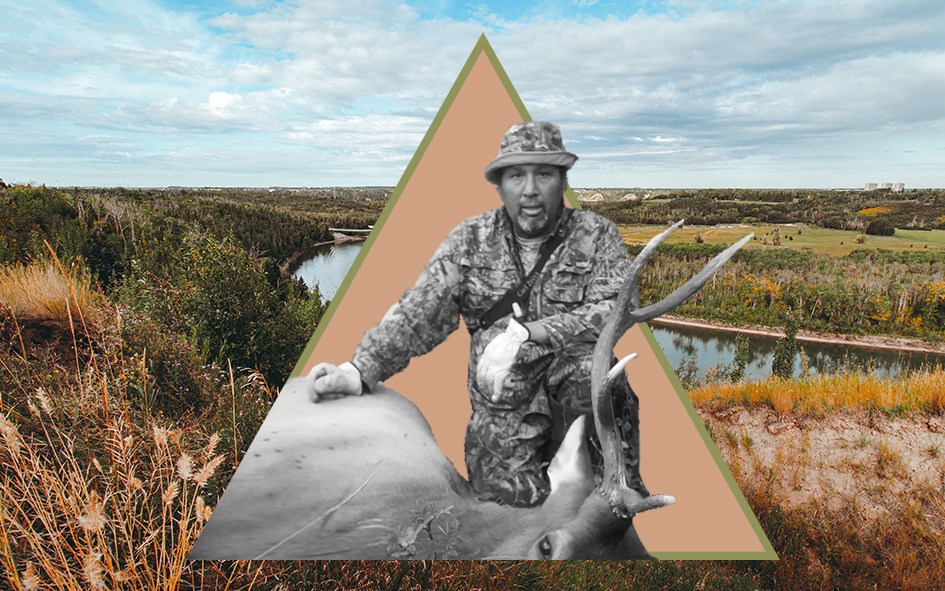 Bradley Desjarlais, an Anishinaabe hunter, is excited to see what the Treaty Land Sharing Network has in store. Background photo by Darby B / Unsplash, main photo supplied by Desjarlais, collage by Cloe Logan
Previous story
Next story

Now that Bradley Desjarlais has caught what he needs to feed his family for the season, he says moose meat, gravy and mashed potatoes are the first things on the menu at his house.

His 17-year-old daughter requested the combination, he said, speaking from where he lives in Saskatoon, a few hours away from his home community of Fishing Lake First Nation. Desjarlais, who is Anishinaabe, has been hunting elk, moose and deer since his grade school days.

However, being an Indigenous hunter in Saskatchewan is far from easy. Most of the land below the treeline is privately owned, and reserve land makes up just two per cent of the province.

The Canadian Centre for Policy Alternatives dubbed the period between 2007 and 2017 the “decade of privatization.” Under then-premier Brad Wall, the government sold $1.1 billion in public assets and, as of March 2021, had auctioned off over two million acres of Crown land.

Along with land being hard to access because of ownership, it can also be dangerous. Just last month, the provincial government amended its trespass act, which will see “stronger penalties for trespass and make it easier for rural landowners to take legal action against trespassers.”

When Desjarlais looks back on his decades of hunting, he sees beauty, along with a sinister and increasing sense of fear. “No Trespassing” signs have become more common, police and game wardens are seemingly on speed dial.

“I live off subsistence hunting... It's like if a normal person goes to the grocery store, and they’re persecuted all the way,” he said.

“That’s how it’s been for me, and I know for a lot of other people it’s been the same.”

But things may be changing, at least a bit, said Desjarlais, with the launch of an unlikely alliance between Indigenous land users and farmers in Saskatchewan: The Treaty Land Sharing Network.

The grassroots group was launched in July, backed by a simple idea — to “share land as treaties intended” by allowing Indigenous land users to use parcels of land to practise their traditional ways of life. Farmers can register their property with the network and plant a sign welcoming Indigenous land users, who can then hunt, gather, hold ceremonies and use the land how they wish, without fear of being prosecuted.

The grassroots group was launched in July backed by a simple idea – to “share land as treaties intended” by allowing Indigenous people to practise their traditional ways of life on privately held land. #LandSharing #reconciliation

Although Desjarlais, who is a committee member of the Anishinabek Nation Treaty Authority, didn’t use the land-sharing network for his most recent catches, but he says he will for the next hunting season. More importantly, he hopes his children can utilize the group to hunt, and that the launch will represent a shift in Saskatchewan. He emphasizes how important access to land is, and that without it, Indigenous people can’t practise their inherent rights, nor adequately provide for their communities.

“In my 40-some years of hunting, I've only known to be scared of farmers,” he said.

“It gives me hope. As my hunting career is winding down, I'm thinking about the kids in the future. Because since I was young, and even up to now, there's not much land to hunt on.”

The network’s website explains how during treaty negotiations in Saskatchewan, Indigenous nations said they would share land with settlers — not give it away. In turn, their way of life would be protected. Treaties across Canada, which were supposed to be agreements between the Crown and Indigenous nations, have been continuously broken since their inception.

Indigenous people’s rights to hunt and fish are both inherent rights and treaty rights, while also being recognized by the Canadian Constitution. But as Desjarlais points out, those rights are often challenged by law enforcement and the courts, as well as individuals.

The Treaty Land Sharing Network says those shortfalls make it even more urgent for individuals, such as farmers, to uphold the treaties. One of the group's guiding principles is: “It is critical for settlers to engage in ongoing learning together to deepen their practice of the treaty relationship, even when this work requires them to set aside their own ways of doing things, challenge their perceptions, and feel uncomfortable.”

That's why Morley Maier, a Yorkton farmer and board member of Nature Saskatchewan, wanted to take part by registering his land with the network.

“We know Canada's history, we know our provincial history. And it's not a good history, and it continues. So we have made a decision that we no longer want to be a part of that,” he said.

He hopes the network is a step towards making rural Saskatchewan a more welcoming place for Indigenous people. He owns an underdeveloped parcel of land spanning 640 acres, 500 of which are cultivated. Wetlands and polar bluffs dot the property, which is where Maier was born. Although he says some of the land may not be useful because it’s agricultural, noting that farmland is changed land, he hopes it will be of use to someone. At the very least, he says putting up a sharing network sign on his property may encourage others to do the same.

Desjarlais said he’s still digesting the network and the change it could bring, and that after so many years of feeling unwelcome on his own land, he’s still in shock that it even exists.

“It's just totally everything you would never expect to come out of Saskatchewan,” he said.

Our futures are being held hostage

Awesome!. In Norway, people are allowed to use farmers pastures, etc., for hiking and camping, but have to leave everything as they found it. No garbage, no damage.
It seems to me a very sane thing to do.