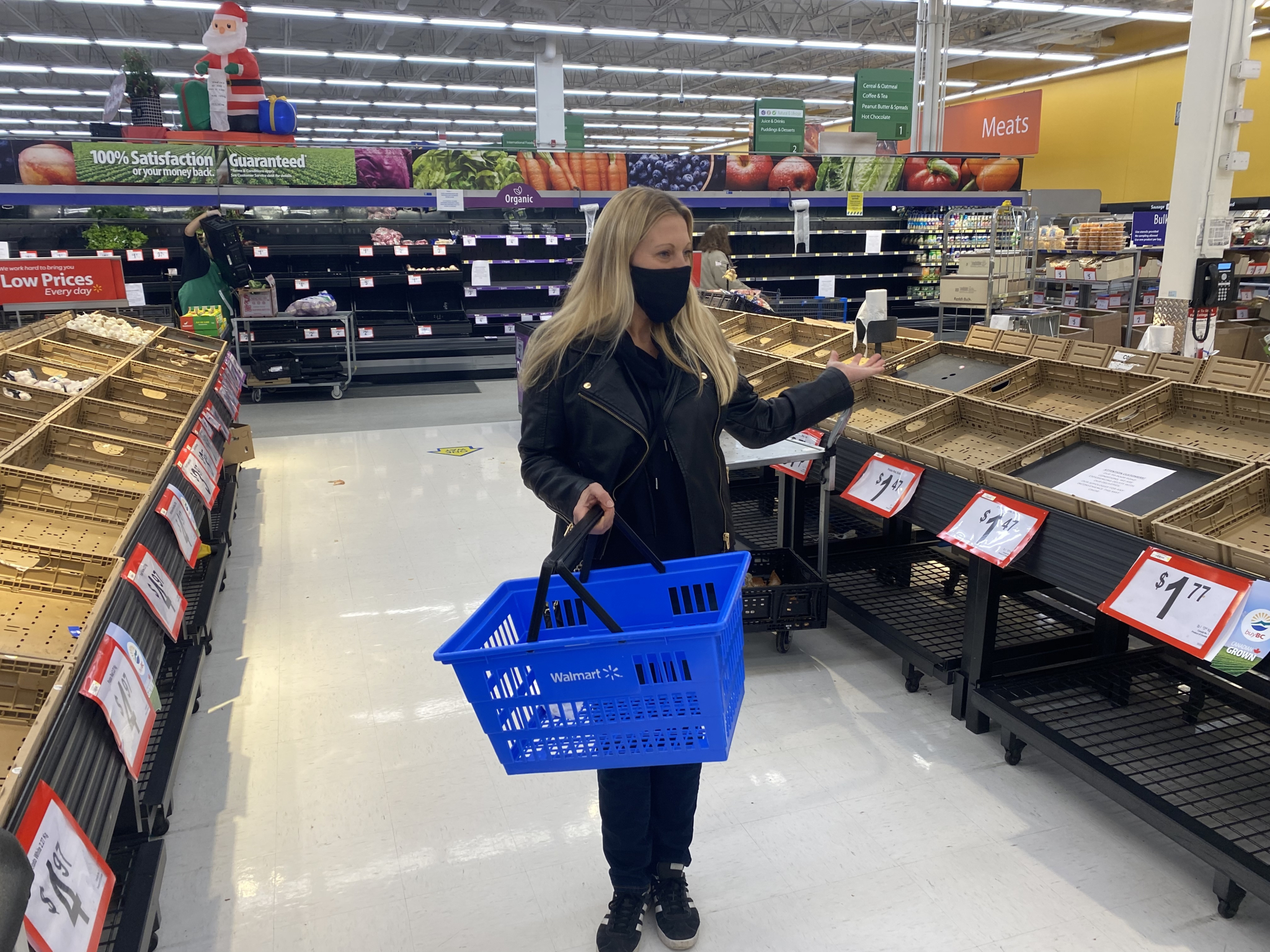 When Penticton, B.C., resident Katya Irwin opened her computer Tuesday afternoon to place an order at her neighbourhood grocery store, the floods and landslides wreaking havoc in other parts of the province were far from her mind. Then she noticed that dozens of commonplace items like milk and vegetables were no longer in stock.

"I was surprised because I didn't even realize there was this panic-buying going on," she said. "By the time I picked up my order at five o'clock, I would say 75 per cent of the items [she'd ordered] were all out of stock.

Jam, hot chocolate, broccoli, and celery — all were nearly impossible to find in the town as waves of panic purchases left grocery store shelves bare. By Wednesday morning, beets and blueberries were among the only fresh goods that remained.

"You kind of feel bad for people going to the shops today and they don't have anything," she said.

The shortages come as the province grapples with an unprecedented storm that blocked all roads into Vancouver and has put much of the Fraser Valley — the province's breadbasket — under metres of frigid and dirty water. Experts warn the crisis that has left farmers struggling to save their livestock and several communities dependent on helicopters for food delivery has exposed critical flaws in the path B.C.'s food takes from farm to fork.

"This is what we're going to deal with: The impact of centralizing everything and just-in-time delivery," said executive director of the Central Kootenay Food Policy council Abra Brynne. "We have to recognize that building in structures that create that level of vulnerability ... is crazy."

Already this year, B.C. has seen massive fires that wiped out entire towns and left much of the province shrouded in smoke, a searing heat dome, months of drought, and an unprecedented tornado near Vancouver. As the climate crisis intensifies, these kinds of extreme events and their impacts on food and infrastructure will only become more common.

A pre-pandemic 2020 report commissioned by Metro Vancouver found that about 78 per cent of B.C.'s food supply flows from — or through — Vancouver. With landslides and washouts blocking all highways out of the city, stores in the province's Interior and north are facing immediate short-term shortages.

Flooding in B.C. has left farmers struggling to save their livestock and several communities dependent on helicopters for food, exposing critical flaws in the path B.C.'s food takes from farm to fork. #SupplyChains

Take the Skawahlook First Nation on the north bank of the Fraser River between Hope and Agassiz. Landslides cut the community off from the outside world over the weekend, said Chief Maureen Chapman, leaving residents and travellers stranded.

"The cupboards are bare, there's nothing. There's one gas station now that's got gas, and there's no food in Hope," she said. The nation has chartered a helicopter to bring food in for residents and the dozens of travellers camped out in the community hall. Earlier Wednesday, the federal government said it will deploy the Canadian Forces to help heavily impacted communities across the province.

Impact on farms could last months or years

Even communities like Penticton that remain linked to Alberta and the U.S. are vulnerable, Brynne said.

Sumas Prairie and other flooded areas in the Fraser Valley are home to vegetable and crop farms, over 60 broiler chicken, egg, and turkey operations, and dozens of dairy herds. Agriculture Minister Lana Popham noted in a Wednesday press conference that the province's main dairy processing and quality testing facilities are also in the flood zone, forcing B.C. producers to send their milk to the Prairie provinces for essential sanitary testing.

It will be days to weeks before farmers can assess the full extent of damage to their herds and buildings, and likely months more before they are fully operational again. In the meantime, grocers will be able to resupply from unaffected parts of B.C. or other provinces, she said. Speaking at the same conference, Premier John Horgan urged B.C. residents to restrain from hoarding food to ensure everyone gets what they need as stores scramble to adjust.

"People should not be panicking," said Simon Fraser University business professor and logistics expert Feyza Sahinyazan. "It becomes a self-fulfilling prophecy [when] people think supplies will not last and ... they diminish the supplies available."

This, in turn, strains larger regional and global supply chains as they respond to erratic consumer demands, making some items unavailable and pushing up prices. With ports, railways, roads, and ships already struggling as a result of the COVID-19 pandemic, the best response consumers, governments, and businesses can have to biblical floods and other climate disasters is to remain calm and try to diversify their suppliers and supply routes, she said.

It's a message Brynne hopes will stick with businesses and governments even after the floodwaters have receded and the roads are restored.

"We desperately need to relocalize our food systems infrastructure so that when this kind of event happens again, the whole province isn't made vulnerable," she said. "Some redundancy, though it may look expensive initially, in times like now makes really good sense and is ultimately lower cost."

Are people ‘panic buying’ to

Are people ‘panic buying’ to hoard celery and tomatoes?

Or are they ‘buying’ from a system that has a 1 day buffer?

You mention both possibilities in the article. But they are very different issues. You would have to ask the clerks what people are buying.

I do know thousands of litres of milk east of Abbottsford are being dumped as the only processing plants are on the other side. So don’t expect normal dairy supply for weeks.

I live in 100 Mile House, BC and I went to 3 stores yesterday. Most of the produce (fruits and vegetables) was gone. Milk, eggs, flour, and a lot of fresh meat, especially chicken, was gone. Probably toilet paper too (I didn't look)!

In the past, we have had community cafes to discuss Food Security. One need identified was food storage, a place for the community to store food for the winter months. But nothing resulted out of these discussions.

A produce worker at Save-On said they hadn't had a truck come in for 4 days. And we will need to wait a little longer...