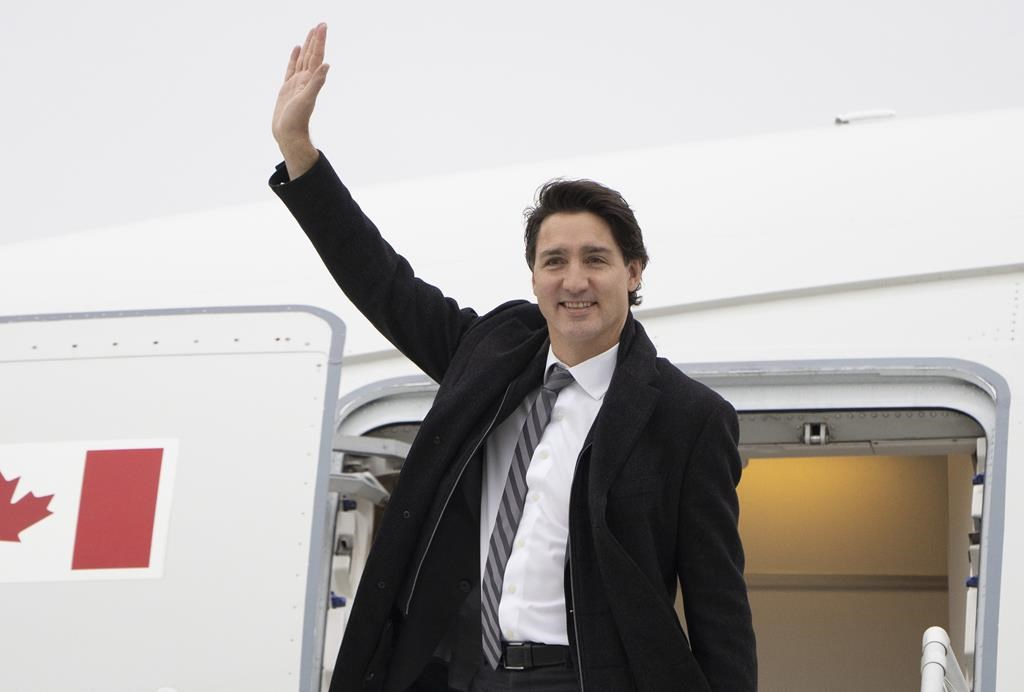 Canadian Prime Minister Justin Trudeau departs on a government plane, on Wednesday, November 17, 2021 in Ottawa. Trudeau is flying to Washington for meetings at the White House. Photo by The Canadian Press/Adrian Wyld
Previous story
Next story

There's plenty of room and lots of good reasons for Canada and the United States to find common ground on tax credits for electric vehicles, Deputy Prime Minister Chrystia Freeland said Wednesday on the eve of a key meeting between Prime Minister Justin Trudeau and President Joe Biden.

Otherwise, it could well become "the dominant issue" in a Canada-U.S. relationship that's already facing "real challenges," Freeland warned during a rooftop news conference at a downtown D.C. hotel.

Both countries are pursuing fundamentally the same goal, Freeland said: encouraging the move away from gas-powered internal combustion engines in an effort to slow the impact of climate change around the world, while simultaneously encouraging post-pandemic economic growth.

But Biden’s proposed EV tax credit — which would effectively cut Canadian-made vehicles and parts out of a lucrative incentive worth up to $12,500 to a prospective U.S. car buyer — would work counter to their shared goals.

"Job 1 for us is just raising awareness," Freeland said — something she's confident the Canadian delegation accomplished Wednesday during meetings with senior congressional leaders on Capitol Hill.

Freeland didn't elaborate on what some of those potential solutions might be, but her message was clear: there's room for the U.S. to manoeuvre so that the objectives of the measure remain intact, but Canada doesn't get left out in the cold.

She cited the newly forged North American trade deal, known south of the border as the U.S.-Mexico-Canada Agreement, or USMCA, as evidence that the two countries know how to work together.

"We sort of said, 'Guys, like, we all spent a lot of time negotiating this agreement that had support — obviously from Republicans, it was a Republican administration — but it had support from Democrats too,'" Freeland said.

"'Do you really want to violate it in such a significant way?'"

Electric vehicles will be a major part of Thursday's discussions with Biden and Mexican President Andrés Manuel López Obrador — not just on tax incentives, but also where the U.S. auto sector is going to get the critical minerals and rare-earth elements so vital to the manufacture of EV batteries.

When global supply chains are under pressure, as they have been since the onset of COVID-19, the U.S. "could do worse" than relying on Canada to provide a reliable and affordable supply of raw materials, Trudeau said.

"It is a two-way street. We do well when we're working together," the prime minister told a question-and-answer session hosted by the Wilson Center.

China is the world's leading supplier of those minerals and pandemic-induced bottlenecks have created major shortages — something Trudeau alluded to when he said some other countries have lower production costs because they "don't care" about environmental or labour standards.

Conservative Leader Erin O’Toole called on the prime minister to deliver "tangible results" for Canadians at the summit, saying the relationship between Canada and the U.S. has been getting worse over the past year.

He urged the prime minister to obtain guarantees that Biden will include Canadian-assembled cars in an electric-vehicle tax credit, carve out Canadian exemptions for Buy America policies and support the continuation of Enbridge Inc.'s cross-border Line 5 pipeline.

None of those things are likely to emerge from meetings with the president that are only scheduled to last a few hours.

On Monday, four bipartisan U.S. senators wrote to Foreign Affairs Minister Melanie Joly to ask Canada to align border restrictions with its southern neighbours, especially when it comes to Canada’s requirement for a negative molecular COVID-19 test for incoming travellers.

"It is important for both of our nations’ economies that fully vaccinated individuals are able to travel between Canada and the U.S. with ease," wrote senators Amy Klobuchar, Susan Collins, Chuck Schumer and Mike Crapo — three of whom were on hand Wednesday when Trudeau arrived for his Senate meeting.

The prime minister seemed at ease and relaxed as he worked the room upon his arrival, even eliciting a thin smile from Senate Minority Leader Mitch McConnell when the group lined up for a photograph.

"Mitch to my left," Trudeau cracked. "Look at that."

On the other side of the sprawling Capitol complex, Trudeau met with House Speaker Nancy Pelosi and members of Congress with a specific interest in Canadian matters, including New York Rep. Brian Higgins.

Higgins, a Democrat, has been championing the complete reopening of the Canada-U.S. border for months and said he remains frustrated that Canada still requires a PCR test to enter.

"The fractured approach to border management by both the U.S. and Canadian governments is contributing to public confusion, anger and frankly, it makes no sense," Higgins said after the meeting.

"Testing is not only unnecessary, it is prohibiting a cross-border exchange critical to fostering economic recovery in both nations."

Trudeau later promised news before the end of the week on the testing requirement but refused to confirm reports that Canada plans to exempt Canadian travellers returning from trips of less than 72 hours.

"We are looking at making steps to loosen up requirements while at the same time keeping Canadians safe," Trudeau said, adding there'll be "an announcement in the coming days."

Trudeau capped the evening with a visit to an annual gala hosted by the Canadian American Business Association atop the ritzy Hay-Adams hotel, a stone's throw from the White House.

His government's climate change agenda is "not just about clean air and fresh water, although that'd be enough, but also about opportunities, good jobs, and a strong future for everyone," Trudeau said.

"These are things on which, as countries and as friends, we are so deeply aligned. Canadians and Americans get — regardless of the various pushes and pulls of politics — that there is a clear direction forward that more and more people are seeing, more and more people know that they want to be part of."

— With files from Laura Osman in Ottawa

Trudeau heads to Washington for first North America summit since 2016

No better time to invest in an electric future