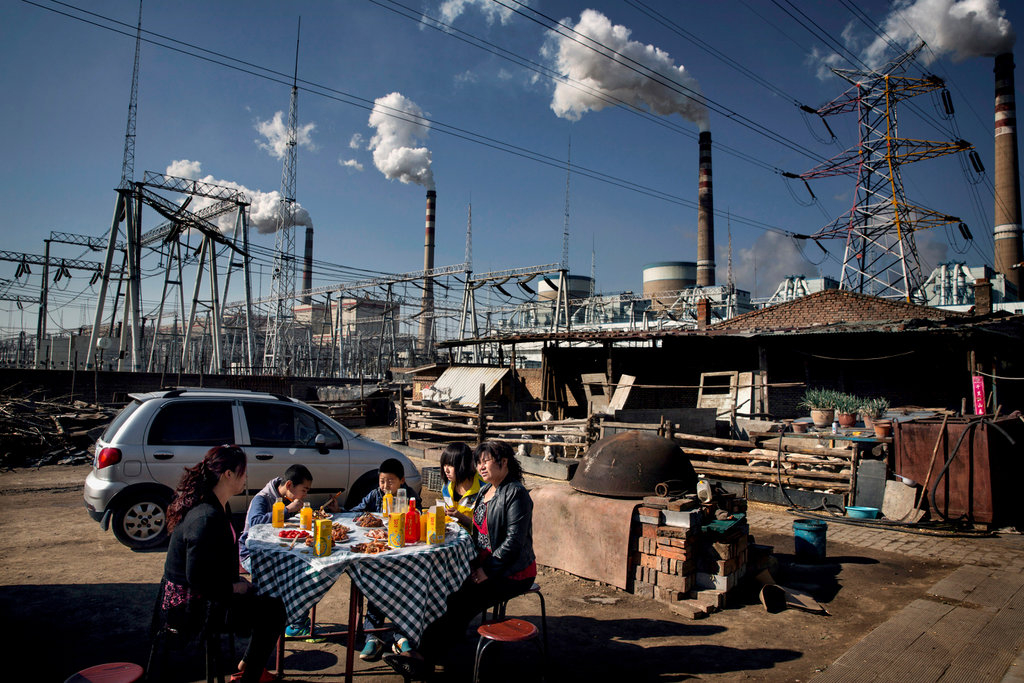 Migrant workers eat a meal at a wedding banquet in their housing compound. Looming over them are the smoke stacks of the Datong No. 2 coal-fired power plant, where some of them work. Photo by Adam Dean / Panos Pictures
Previous story
Next story

As COP26 drew to a close over the weekend, Chinese media highlighted Beijing’s contribution over the last fortnight in Glasgow. “The Chinese delegation took a constructive attitude, actively communicated and negotiated with all parties,” said CCTV’s main evening news bulletin on Sunday. “[It] provided China’s wisdom and China’s solution …”

But when China and India chose the last few hours of negotiations to push for the language on coal to be diluted from “phase out” to “phase down,” both countries came under nearly immediate fire from commentators. COP president Alok Sharma later urged both countries to “explain themselves and what they did to the most climate-vulnerable countries in the world.”

On Monday, Beijing kicked the ball back to developed nations. Zhao Lijian, a spokesperson at China’s foreign ministry, said that before asking all countries to stop using coal, developed countries should remember how far many developing countries need to travel in order to find sustainable ways to provide electricity for their citizens. “We encourage developed countries to take the lead in stopping using coal while providing ample funding, technological and capacity-building support for developing countries’ energy transition. We need concrete actions more than slogans.”

Developed countries have not yet delivered on all their promises, he pointed out in answer to a question from the Communist party mouthpiece, the People’s Daily, at Monday’s regular press briefing. “There were regrets and deficiencies at the session, and the global response to climate change still faces many challenges.”

The framing of the negotiations as developing versus developed nations was clearly aimed at China’s domestic audience, analysts say. During the first week of COP26, as international media criticized Xi for not turning up in person, a decade-old video clip of the Chinese representative, Xie Zhenhua, resurfaced and went viral on Chinese social media.

In it, an angry Xie criticized developed countries for putting too much pressure on developing nations in a string of parallel sentences. “We need to develop, we need to eradicate poverty, we need to protect the environment. We have done everything we could. We have also done things you have not done. What qualifications do you have to teach me here?”

Xie’s past fury prompted social media users last week to start a hashtag with a line from Xie: #sloganscannotreplaceactions. On Weibo, this hashtag has been viewed more than 1.3 million times.

China and India ‘side by side’

The Chinese media are now wondering if Beijing’s solidarity with Delhi on climate would improve the strained bilateral relationship, following territorial disputes in the last year, prompting a statement by India’s chief of defence staff, Bipin Rawat, that China is the biggest security threat facing his country.

But on Sunday, Chinese state media praised China’s solidarity with India. The state-owned Global Times claimed in a piece that China and India “stood side by side together” at a critical time. “As the two biggest developing countries, China and India face similar situations, similar stances and similar demands,” it wrote.

But it’s not all power play in Beijing’s view of COP26. Surveys from recent years have consistently shown that the Chinese public has been more aware of the climate emergency and the main source of it — a message that state news agency Xinhua also echoed, saying “the dominant source of carbon dioxide emissions is the process of electricity generation.” And Beijing has certainly promoted tackling the climate emergency as a part of President Xi Jinping’s catchphrase of a “shared future for mankind.”

“The deep decarbonization required by climate science needs the full support of the public. This is the case for all the major emitters. China is not an exception,” said Li Shuo, a Beijing-based policy adviser at Greenpeace East Asia. “Public opinion has advanced China’s environmental agenda.

“But the climate crisis demands more. The gap between Chinese public perception and what needs to be done to keep [a reduction of] 1.5C alive will determine the speed of China’s decarbonization,” he said.

Will the world's climate target stand in the way of India's development?

By Aniruddha Ghosal | News, Politics | November 12th 2021
Reports from the Race to a Safer World

Obama blames Russia and China for lagging on climate policy

re: Interest in #Cop26 in China: A hundred million clicks in North America might be a lot, but in a population of over a billion - not so much. And if what they get when they click is Chinese propaganda, then worth even less.