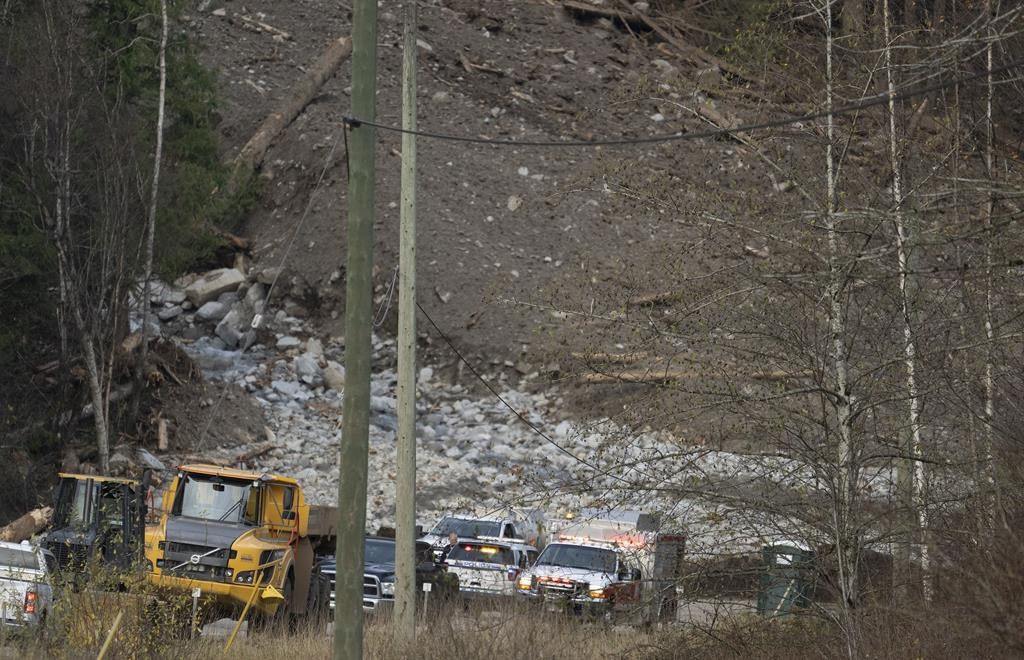 Emergency vehicles and tractors are seen at the base of a mudslide on Highway 7 west of Agassiz, B.C., on Wednesday, Nov. 17, 2021. Photo by The Canadian Press/Jonathan Hayward
Previous story
Next story

Jonathan Abecassis, a spokesman for Canadian National, said the emergency evacuation train was expected to arrive in Vancouver shortly after 10 p.m.

"It's a joint operation," he said in an interview from Montreal. "Emergency Management B.C. asked CN to organize it. We reached out to Via Rail and we orchestrated it with them.

"It's about 200 evacuees who had no other way of getting out of town," he said.

Abecassis said the evacuees boarded onto a Via Rail passenger train at about 8 p.m. Wednesday.

He said the floods and slides have seriously affected rail operations but access to Vancouver from Hope was available.

"We have quite a few washouts in the area and we're really doing whatever we can to help get people safe," he said.

Most of the people on board the train had been in Hope, located about 150 kilometres east of Vancouver, since Sunday when disastrous floods and mudslides cut off much of the province's major highways.

"On behalf of everyone at Via Rail and CN, we offer a heartfelt thank you to the employees who planned this operation and supported the evacuees who have gone through a very difficult time over the past few days," said a joint CN-Via Rail statement.

"We are truly proud to have been able to offer our assistance during this emergency."

Earlier Wednesday, B.C.'s transportation ministry announced the reopening of Highway 7 between Agassiz and Hope in limited capacity to westbound traffic only to allow people to make their way back to the Lower Mainland.

B.C. declared a state of emergency following the unprecedented flooding that has displaced residents, severed highway access, trapped motorists and resulted in at least one death of a woman and thousands of livestock.