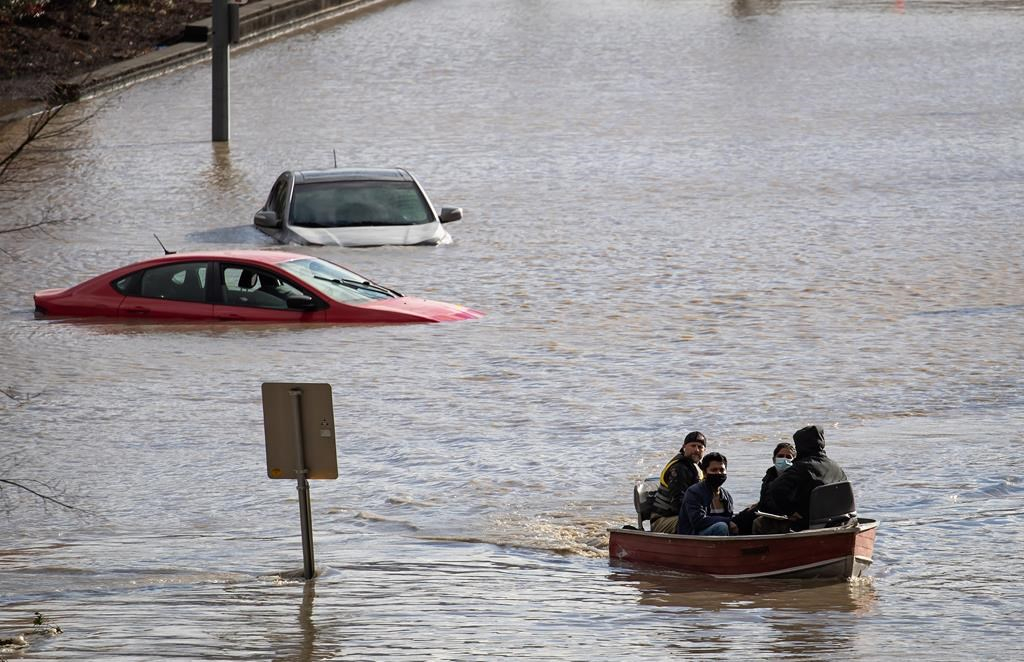 People who were stranded by high water due to flooding are rescued by a volunteer operating a boat in Abbotsford, B.C., on Tuesday, November 16, 2021. File photo by The Canadian Press/Darryl Dyck
Previous story
Next story

British Columbia declared a state of emergency Wednesday following unprecedented flooding that has displaced residents, severed access to multiple highways and killed thousands of livestock while many more animals are in danger of dying.

Premier John Horgan said the declaration will help preserve basic access to services and supplies for communities across the province, which has experienced yet more weather-related havoc months after historic wildfires and a heat dome that claimed the lives of nearly 600 people.

Horgan said the government will introduce travel restrictions to ensure essential goods and medical and emergency services can reach communities.

He has also asked the federal government for help in responding to the disaster.

"The province has now formally requested that deployment of federal resources, including the Armed Forces, to assist with evacuations, managing of supply chains and resupply chains, security in inundated areas as well as restoration of safe drinking water and other logistics assistance," he said.

"I also want to thank the governments of Alberta, Saskatchewan and Ontario, who were immediate in their offer of assistance."

Horgan asked B.C. residents not to hoard items, saying people shouldn't be buying more food than they need so their neighbours can also access necessary supplies.

He said no alert system could have protected motorists who were stranded overnight on highways from mudslides and homeowners from flooding in parts of the province. That includes Abbotsford, where police and firefighters worked tirelessly to rescue residents after water from the overflowing Nooksack River in Washington state gushed into the Fraser Valley community and rose rapidly.

Prime Minister Justin Trudeau said the federal government is connecting with local authorities and the province to learn more about the ongoing situation.

The federal government will assist with cleanup and rebuilding "after the impacts of these extreme weather events," Trudeau said from Washington, where he was to attend a meeting Thursday with the presidents of the United States and Mexico.

B.C. Public Safety Minister Mike Farnworth echoed the sentiments of Abbotsford Mayor Henry Braun, who has urged any residents remaining in the Sumas Prairie farming area to immediately leave due to the potential failure of a pump station.

He said the first priority is to re-establish connection from the Lower Mainland to the Interior and northern parts of the province after slides severed roadways and stranded hundreds of people in multiple locations following record-breaking rainfall.

Farmers tried desperately to move their livestock as floodwaters swamped parts of the Fraser Valley, but their attempts were mostly unsuccessful.

"We have many, many more that are in difficult situations and we're seeing an animal welfare issue develop. They need attention and so with my colleagues, we're developing routes so that veterinarians can access farms and get to the animals as soon as possible," she said.

"There will have to be euthanizations that happens. But there are also animals that have survived, that are going to be in critical need of food in the next 24 hours."

Over 300 people trapped between two mudslides on Highway 7 near Agassiz were airlifted by helicopter after spending the night in their vehicles.

Chelsey Hughes said she is thankful to have survived a slide that slammed into her car before it landed in a swamp as she was driving along the highway. Now she's thinking of others who are dealing with similar harrowing experiences.

Hughes, 24, was heading home on Sunday when she saw a tree starting to fall as a slide shoved her car about a kilometre off the road and down an embankment.

"Then the car stopped moving and I was just shocked. I was afraid to move because I didn't know if I was injured," she said after spending about five hours shivering on top of her car without a jacket next to another vehicle with four university students sharing one jacket atop their vehicle.

When Hughes finally connected with a 911 dispatcher, he helped her monitor one student's condition after he had an asthma attack before they finally saw the lights of rescuers.

They spent an hour hiking out, she said of the traumatic events that unfolded Sunday night before nine of them were taken to hospital in Chilliwack.

Hughes said she travels with snacks, water and a tarp in the truck of her car but quickly realized she couldn't reach any of those supplies, which were submerged in the rising, muddy water.

The Surrey resident and yoga instructor is now thinking about the family of a woman who died while driving along Highway 99 near Lillooet as crews search for at least two others who went missing along that route.

"I think that could have been any one of us, and there's nothing that you can do. When we got hit by that landslide, we just had to surrender."

"On behalf of Alberta, we stand behind British Columbians who have been affected by this flooding and damage," Kenney said. "So many Albertans are originally from B.C. They have relatives and family there, so I know that we're all concerned."

Kenney said his province will be directly affected by the weather events in the neighbouring province when it comes to supply chains.

"This will become very acute now for Alberta and the rest of Canada with the disruption of parts of the Trans-Canada Highway and some other roadways," he said, adding trucking and rail traffic would now have to transit through Washington and Montana.

"But our first concern is for those people whose lives and homes have been affected and we just want to be there to support them."