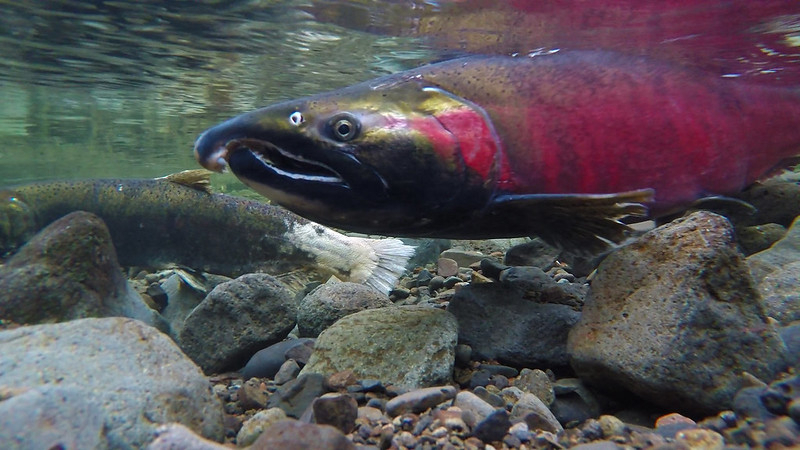 Salmon experts are worried about how B.C.'s flood could harm the fish and their recently laid eggs. Photo courtesy of NPS Climate Change Response / Flickr
Previous story
Next story

“I realized there were some salmon that were stranded in the farmer's fields from the sloughs that were overflowing,” said Estrada, owner of the Chilliwack guiding company Sturgeon Slayers, who did what he could to save them.

He gently picked the fish up and moved them back to the river.

“I tried to move them over to where they should be, but you know, it's still overflowing,” he said.

Estrada said he rescued around 10, but wonders how many are still out there.

We are driving around trying to help lost wild salmon if the fields. If you have some you need moved contact us to help. Sad to see @FinDonnelly @markstrahl @jjhorgan pic.twitter.com/ASefjulwTN

The fish were found in the Sumas Prairie area of Abbotsford, which saw intense flooding force the evacuation of hundreds of residents and their livestock — thousands of farm animals couldn’t make it out and died. The area was once home to Sumas Lake, a vital area to the Sumas First Nation before it was drained by settlers to use as farmland.

The Fraser Valley flooding was caused by an atmospheric river, which saw intense rainfall across southern British Columbia due to climate change, exacerbated by a summer of wildfires and clear-cut logging practices. The weather event prompted evacuations, left people stranded and caused at least one death.

Salmon have been seen in flooded farm fields and swimming around picnic benches in parks. There are numerous setbacks the weather event could have on the province's population, said @AaronHill_ of @WatershedWatch_.

The high waters have Aaron Hill, executive director of Watershed Watch Salmon Society, especially concerned for the well-being of the province’s already precarious salmon population. Although some have already made it through the river system from the ocean, other species' spawning seasons last through November. It means there are salmon, like the ones Estrada saw in Abbotsford, struggling to finish their run and freshly laid eggs that may be getting flushed away.

Even though Hill says flooding is a natural part of a river system, he stressed the timing and severity of B.C.’s event aren’t good.

“The timing of this [flood] is really devastating because it's happening when there's newly laid out eggs in the gravel and fish still spawning,” he said.

“... What happens is that the gravel gets scoured out by the raging water and by landslides and trees and things coming down the river, and then you have silt being deposited after the fact in the gravel beds to smother eggs.”

Egg survival is top of mind for Hill, as are stranded salmon. He notes the “poor chum” seen swimming among picnic tables on Vancouver Island and says there are surely many more like them that might die once the waters recede.

Hill is especially concerned about the chum, which are currently spawning. Juvenile coho and chinook inhabiting the waterways are also vulnerable right now, he said.

“... When one [species] gets hit really hard, there's usually still a few others that can make it through. But the problem with what's happened here is that our populations are already at such low levels of abundance that they have very little buffer to absorb impacts like this,” he said.

It’s too early to tell exactly how the flood will impact salmon, Hill said, but he notes contaminants such as fertilizer from agricultural land and other pollutants from roadways could poison the waterways. He said he has heard from volunteers on the ground that the toxic waste is building up in the flood zone — everything from petroleum slick, human and animal waste, deceased animals and garbage. All getting pumped back into the river, and into salmon habitat.

As people like Hill gear up to take stock of how the floods impacted salmon, he said it’s important to think about what caused the flooding, and how we’re going to update our infrastructure to be more resilient.

In Sumas Prairie, pump stations such as the Barrowtown facility (which narrowly avoided failure this week) are responsible for keeping water off the land, but pose additional problems for fish. The stations are situated all along the Fraser River, and keep water out of farmland and stream levels even. However, they also are responsible for harming the salmon population — if fish go through them, they die.

Many pump stations are due for infrastructure upgrades in the near future and that’s an opportunity to make them more salmon-friendly, he said.

“The bigger picture is also really important to hear — this is happening because of human-caused climate change. We're getting more intense and more frequent floods. And that's something that's been predicted for a long time,” he said.

“And we know that our flood infrastructure in the lower Fraser is not up to the job. We've known that for a long time.”