Floods another blow for B.C. restaurants 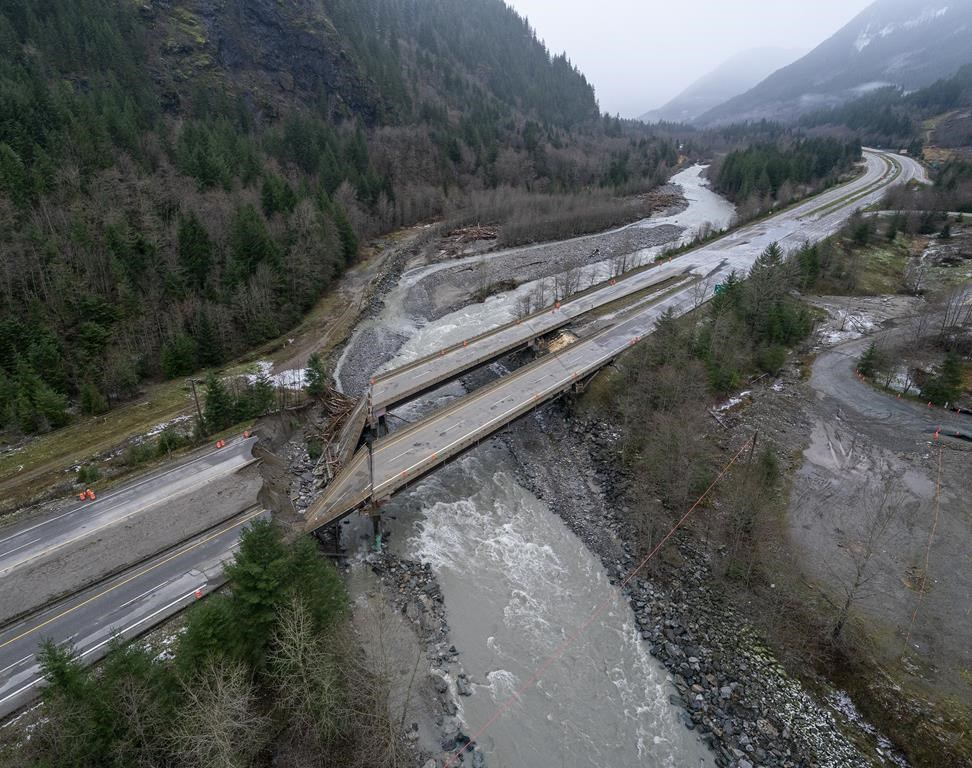 Damage caused by heavy rains and mudslides earlier in the week is pictured along the Coquihalla Highway near Hope, B.C., on Thursday, November 18, 2021. Photo by The Canadian Press/Jonathan Hayward
Previous story
Next story

Restaurant operators in British Columbia's southern Interior are scrambling after flooding and landslides closed highways and rail lines, cutting businesses off from the supply chains they rely on.

It's the latest hurdle after 20 months of struggles through the COVID-19 pandemic and a summer of smoky skies from wildfires that wiped out tourism.

"We don't actually have more to give in this scenario," said Brandon Loughery, managing partner of Woodsman Group, which operates two pubs around Kelowna and a seasonal restaurant at the SilverStar Mountain ski resort in Vernon.

"We're already operating on razor thin margins," he said in an interview.

They've been getting ready to open the restaurant for the winter season, but in the aftermath of the flooding, they can't order what they need in bulk, Loughery said.

The two pubs in Kelowna rely on deliveries every three days, and with none in sight, Loughery said he expects they won't have enough food supplies by Monday.

They've been shopping at grocery stores, trying to keep the doors open. But that's costly for a restaurant, and while the shelves were a bit fuller by Thursday, there was little meat, milk, eggs or other produce to be found earlier in the week, he said.

Every major route connecting B.C.'s Interior with the Lower Mainland was severed by floods, mudslides or washouts after the southern part of the province was hammered by record rainfall.

If such debilitating supply challenges were to last for a month or more, Loughery speculated that some restaurants in the Interior would have to close their doors.

"If you don't hit your base number to cover your fixed costs, it doesn't take long for things to go backwards."

#Floods another blow for #restaurants in #BC Interior, operators and advocates say.

Goods should start flowing again as some highways are reopened and alternative routes established, but it will be a stressful couple of weeks for the industry, said Ian Tostenson, president of the B.C. Restaurant and Food Services Association.

"It could take 10 to 20 days to sort out the logistics of new routes," Tostenson said, noting trucks usually travel to the Interior every day along the Coquihalla Highway, which is completely washed out and requires extensive repairs.

In the meantime, he said, restaurants in the Okanagan Valley area closing.

"There's not a lot of storage of products in the Interior, because mainly they just rely on overnight shipment from the Lower Mainland, so it’s a real challenge," he said.

Minister of Public Safety Mike Farnworth told a news conference this week that "our transportation infrastructure is crippled," though he also said there are many parts of the province where routes are not compromised. The Retail Council of Canada and the trucking industry have been clear that "there's lots of supply," he said.

Mark von Schellwitz, western vice president for Restaurants Canada, said the disastrous flooding is yet another blow for an industry that's been contending with the impacts of the pandemic, wildfires and "rampant" inflation in food prices.

"I can't tell you the number of operators I've talked to that are exasperated, just saying what else can possibly be thrown at us, it seems like everything's conspiring against them trying to survive as a business," von Schellwitz said in an interview.

Loughery, too, said he's seen some food costs more than double in the last year and he's concerned the flooding in prime agricultural land will drive them up further.

"There's always a reason. It's because of the fires, it's because of the pandemic, now it will be because of the flooding. I haven't seen food prices this high, ever," Loughery said, adding he's had to switch products he's used for years "because they're just not in the realm of possibility of what a customer will pay for."