Why COVID lies spread in refugee and newcomer communities 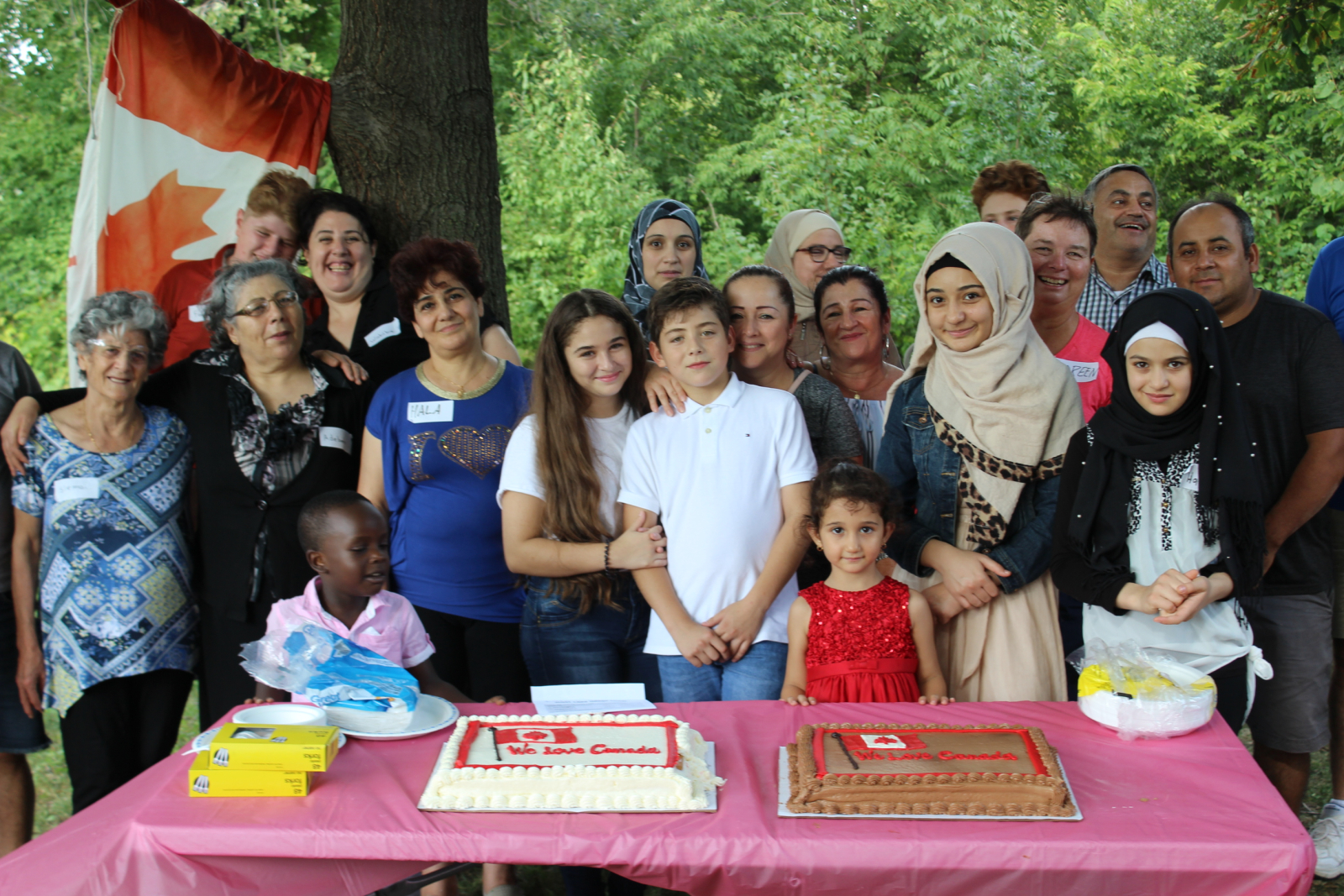 Refugee families and sponsors at a pre-COVID picnic hosted by OMRA in September 2018. Photo provided by Carol Buckley
Previous story

As children of immigrants, we often take on additional roles that would otherwise be fulfilled by our parents. In a new country or a country that isn’t the only one we’ve ever known, we become the children who help with the chores, sometimes with the taxes, and often with explaining to our parents the documents health-care providers or airline personnel are asking for.

In the COVID-19 pandemic, some of us have also become the translators of information, the finders of news, the kids who keep our parents away from the unreliable stories they seem to be coming across through the people they connect with on social media.

But what about those who are in Canada for the first time — who came to the country not long before the pandemic, and who haven’t been here long enough to build their communities and networks? Who may be alone, while they wait for their family that is in another country, sometimes an entire continent away?

What about the refugees and the newcomers?

Last fall, in one of our journalism classes at Carleton University, we came across surprising information about refugees and newcomers in Ontario during COVID-19: a September 2020 report by ICES, a not-for-profit research institute focusing on health-related data in the province, found that while immigrants and refugees accounted for only about a quarter of those tested for COVID-19 between January and June, they represented 43.5 per cent of the positive cases.

The report also found refugees had the highest positivity among those tested — 10.4 per cent versus 7.6 per cent in other immigrants and 2.9 per cent in Canadian-born and long-term residents.

While no other organization has tracked COVID-19 cases among refugees and newcomers in the country since, Jennifer Edmonds, a master’s student at the University of Geneva and co-author of “Refugees in Canada during the first wave of the COVID-19 pandemic,” says that a significant reason for high infection rates in refugee and newcomer communities may be the misinformation and disinformation they’ve come across during this time.

With Canada in a fourth wave despite the country’s high vaccination rates, she also said vaccinating refugees and newcomers against COVID-19 is an important step in achieving herd immunity.

Mistrust in government based on past experiences

Defined as incorrect or misleading information, misinformation is unknowingly spread by people. Disinformation, on the other hand, is defined by the Merriam-Webster dictionary as “deliberate and covertly spread in order to influence public opinion or obscure the truth.”

Opinion: Mistrust in government can play a big role in where and how refugees and newcomers are accessing COVID-19 information, write @meral_jamal and @leilaelshennawy. #COVID19 #vaccines #masks #RapidTests #science

So why might refugees and newcomers have been likelier to access and accept misinformation and disinformation during the pandemic?

Edmonds said mistrust in government can play a big role in where and how refugees and newcomers are accessing COVID-19 information.

If someone’s past experiences with governments were negative, they may not turn to the Canadian government for information about vaccines, for instance.

“Instead, they might turn to family members or social media,” she said. “They're going to trust that information more than if it were coming from the government or public health agency.”

Carol Buckley, the vice-chair of OMRA, a refugee sponsorship group at the Ottawa Mennonite Church, agrees.

A retired public servant who has been working with refugees in Ottawa for over five years, Buckley said she has encountered almost a dozen refugees who are hesitant to get the vaccine. Their reasons include a “fear of sickness or death from the vaccine. Fear of unknown outcomes. Fear of being manipulated by someone … government [and] authorities,” Buckley said in an emailed response.

“They have heard, seemingly from friends, online sources, that the vaccine is harmful, more people have died from the vaccine than COVID, that strong immune systems will protect them.”

According to Edmonds, a lack of trust in the government means the responsibility for getting accurate health-related information to refugees may fall on people they interact with personally.

Family doctors, community groups and religious centres can be more trusted sources of information since personal relationships are already established with them, she said.

As a member of one such community group, Buckley said she has tried to support vaccine-hesitant refugees through non-judgmental conversations about why they are concerned and by sharing information about the vaccine in their language. But it is affecting the work OMRA is trying to do, and the only thing that has changed some of their minds is related to mandatory vaccination required by their workplaces and schools.

Language barriers make it difficult to understand the rules

Language barriers also play a significant role in the ability of refugees and newcomers to access and accept misinformation and disinformation.

Over the past year, the federal and provincial governments, as well as public health officials, have been communicating with Canadians through briefings, announcements and social media posts.

Much of this messaging has been in the country’s two official languages: English and French. Many refugees and newcomers, however, are unable to communicate comfortably or effectively in either.

Lama Chami, the digital co-ordinator with Refugee613, said the lack of multilingual resources during the pandemic has made it more difficult for refugees and newcomers to access COVID-19 information and understand the rules.

This past year, Refugee613 has shared information in 12 languages including Arabic, Spanish and Swahili. It has created a digital vaccine bulletin, infographics and videos that translate public health information on lockdowns and stay-at-home orders.

Chami said these resources are important because refugees and newcomers need “information in their language.”

Groups such as the Ottawa Health Team, a collective of community health centres aiming to bridge the pandemic information gaps faced by marginalized communities, are also targeting misinformation related to COVID-19 and vaccines.

The team started the Ottawa Immigrant COVID-19 Resource Line, providing callers with information on vaccines and testing in Arabic and Somali.

They’re also trying to reach refugees and marginalized groups where they’re communicating most. Through posts on social media channels like WhatsApp — a messaging app popular among members of diaspora communities — they’re sharing accurate vaccine and health-related information on platforms that are often used for spreading misinformation and disinformation instead.

Kelli Tonner, executive director of the South-East Ottawa Community Health Centre and one of the founding members of the team, said the group realized early on that language inaccessibility is a big reason COVID-19 misinformation has spread in these communities.

Mandatory vaccination was a hot topic in the federal election that resulted in a minority Liberal government. In the Sept. 8 French-language leaders’ debate, Liberal Leader Justin Trudeau went so far as to call the discussion on mandatory vaccines “a false debate.”

Conservative Leader Erin O’Toole, on the other hand, stressed vaccination is “essential” but other tools such as masks, social distancing and rapid testing are equally important.

Outside of the politics of mandatory vaccination, the reality of COVID-19 looms. New cases are on the rise, especially in provinces like Saskatchewan, more people are in ICUs because of the coronavirus, and despite Canada’s high vaccination rates, the country is in a fourth wave.

Public health officials across the country say 50 to 90 per cent of Canadians need to be fully vaccinated for the country to reach herd immunity.

"We need to establish herd immunity, and we would need to be at a higher level: 85, 90 per cent vaccination rates," Dr. Paul Roumeliotis, the medical officer of health for the Eastern Ontario Health Unit, told the CBC in July.

But vaccine hesitancy is playing a big role in determining if and when the country will reach herd immunity.

In 2019, the World Health Organization (WHO) called vaccine hesitancy one of the 10 most serious threats to global public health.

Misinformation and disinformation have aided vaccine hesitancy during the pandemic, prompting WHO director-general Tedros Adhanom Ghebreyesus to also say earlier this year, “We’re not just fighting an epidemic; we’re fighting an infodemic.”

The Canadian government has shown its commitment to this fight. In February, the Trudeau government announced it would spend more than $64 million on COVID-19 vaccine campaigns to encourage people to get the shot and combat misinformation about the vaccine.

The funding includes $30.25 million for community-led projects addressing vaccine misinformation locally and “to increase vaccines and address barriers to access and acceptance within their communities.”

Edmonds said this investment is important because although community-based sources of information might be easier to trust for some refugees, the federal government has some responsibility to keep refugees and newcomers informed.

“When we're bringing refugees into Canada, one of the top destinations in the world for refugee resettlement, then we have a responsibility to be caring for the most vulnerable people,” she said.

For Buckley, these steps are important but said she understands why some refugees are hesitant to get the vaccine as compared to resident Canadians.

“These folks have suffered, sometimes decades of abuse, at the hands of their countries' authorities, and it is hard to expect them to suddenly trust authorities,” she said. “Many of the folks I deal with have not had the benefit of education beyond a few grades, making them more vulnerable to wild theories. It may take a generation to overcome hesitancy here.”

With cases in some parts of the country rising once again, and the Delta variant a very real and looming threat, Edmonds said addressing misinformation about vaccines and COVID, especially in refugee and newcomer communities, may be our best bet at reaching herd immunity. And perhaps, the only one.

“Public protection for all kinds of people is achieved when you reach herd immunity. In order to do that, you need to be reaching these pockets of individuals, and especially the most vulnerable,” she said.

This story was supported by Journalists for Human Rights and the Misinformation Project with funding from the McConnell Foundation, the Rossy Foundation and the Trottier Foundation.

COVID: Why don't Ontario politicians listen to the experts?