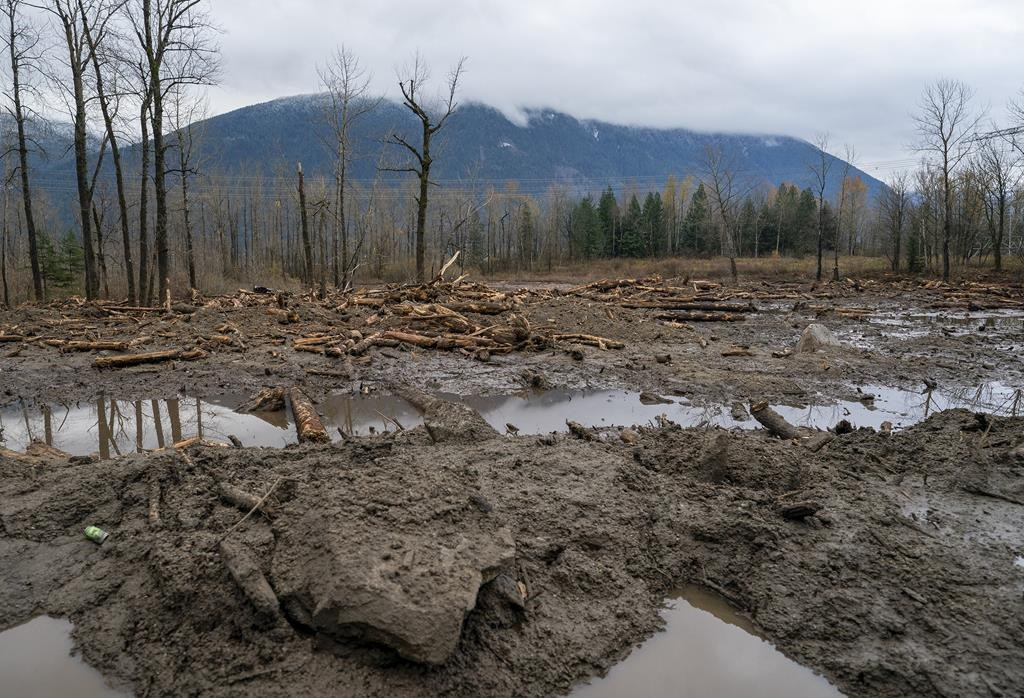 Debris is seen at the highway 7 mudslide west of Agassiz, B.C., on Saturday, Nov. 20, 2021. Photo by The Canadian Press/Jonathan Hayward
Previous story
Next story

Senior government officials in British Columbia warned residents on Saturday to brace for another round of weekend rainstorms even as the death toll from floods triggered by the last round of extreme weather continued to rise.

Public Safety Minister Mike Farnworth said another "atmospheric river" is due to hit B.C.'s North Coast, with rain expected to move south on Sunday and Monday.

His cautions came hours after police announced the recovery of three more bodies in flood-ravaged southern B.C., bringing the overall tally to four since last weekend's torrential rains triggered a series of mudslides across much of the province.

“What I’ve been advised by Environment Canada is they're looking at 20 to 40 millimeters of rain," Farnworth said of the latest weather systems while speaking at a news conference. "Normally that would not be an issue in terms of concern, but obviously given the current saturation we have seen in the ground we’re following that very closely”

Environment Canada has issued a special weather statement for the North Coast, warning that flooding and landslides could occur because of the pending precipitation.

Farnworth said the national weather agency is working on a new system to rank atmospheric rivers, the weather phenomenon that led to the flooding that washed away roads, decimated agricultural operations and disrupted supply chains across much of the province.

"This will help all of us be better prepared for everything from localized flooding and winds to bigger storm events," Farnworth said. "This new approach is based on a system the U.S. is already using."

The Mounties issued a statement on Saturday saying they recovered the bodies of three men from one particularly hard-hit area in the southern part of the province, though noted the discoveries took place earlier in the week.

Police said the men's bodies were located in an area east of Agassiz along Highway 7 and a section of Highway 99, known as the Duffy Lake Road.

The discovery comes days after a woman's body was recovered near the same area on Monday.

The search for a fifth person missing after the mudslides has been suspended, though that person is not currently counted among the dead.

"All current search efforts have been exhausted and discussions are underway as to how and when, best to proceed," Staff Sgt. Janelle Shoihet said in a statement.

The B.C. Coroners Service issued a statement saying it would investigate the deaths and make recommendations, where possible, to prevent similar situations in the future.

The rising death toll comes as the region continues to work to stem the massive damage caused by the floods and ensuing mudslides.

Gasoline restrictions have been put in place, limiting residents who are not essential workers to 30 litres of fuel per gas station visit.

Farnworth encouraged residents to stay home, or else to carpool or use public transit if they really need to travel.

He stressed that the restrictions would only be in place for 10 days and asked residents not to hoard fuel.

"People understand we are in a very challenging situation," he said. "Our supply routes have been damaged, thousands of people have been displaced, huge impacts in our agricultural sector. We have to maintain our supply routes, we have to be able to get goods to where they're needed."

The federal government announced earlier Saturday that it was teaming up with provincial officials to form a working group to address supply chain concerns.

She said the province has enough feed to sustain livestock for five to six days.

Meanwhile in hard-hit Abbotsford, B.C., Mayor Henry Braun said there has been some "good news" as the flood gates at the Barrowtown pump station were able to partially open and allow water from the Sumas River to flow into the Fraser River.

The station helps keep the Sumas Prairie free from flooding in normal conditions.

While pumps can suck out up to 1.89 million litres of water, Braun said the floodgates allow seven times that amount to flow back into the Fraser when fully operational.

He said even the partial reopening has made a difference.

"There's a dramatic change in certain parts of the prairie already," he said, adding that he could now see grass in some previously flooded areas.

He added that he hopes the floodgates will be able to fully open before the next storm.

"It's a concern with weakened dikes," Braun said.

Highway 99 has been reopened to essential travel, with checkpoints planned to ensure travel restrictions are being followed.

This report by The Canadian Press was first published Nov. 20, 2021.