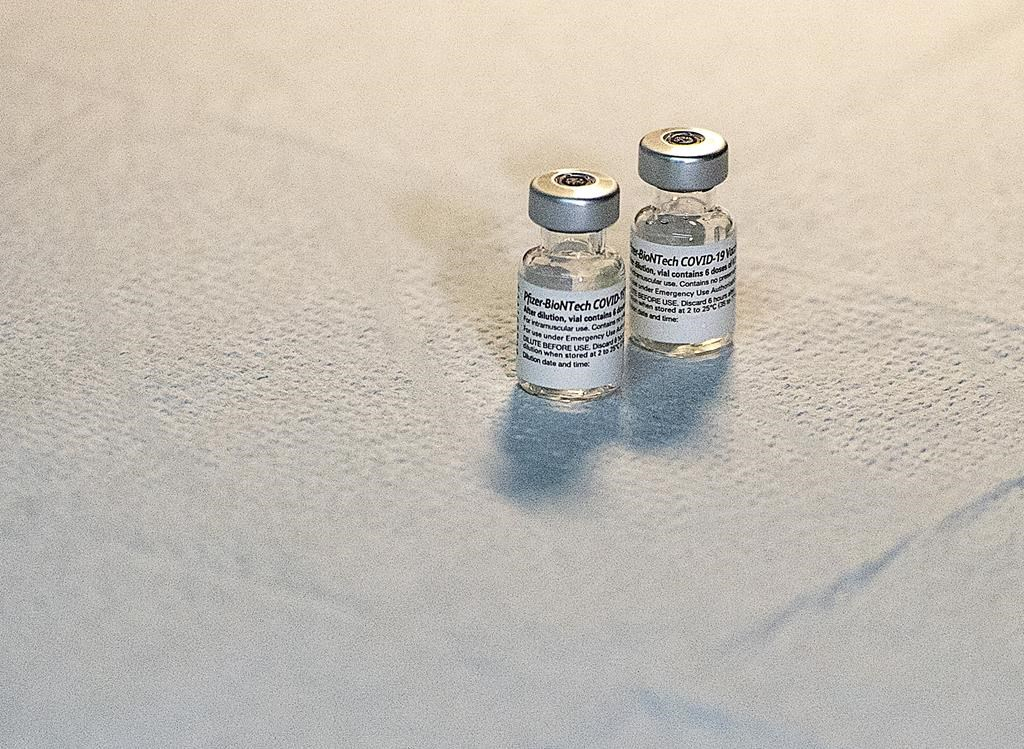 Two vials of the Pfizer-BioNTech vaccine sit on a table at a COVID-19 vaccination clinic in Halifax on Monday, May 24, 2021. File photo by The Canadian Press/Andrew Vaughan
Previous story
Next story

The first batch of COVID-19 vaccines for children landed in Canada on Sunday, clearing the way for provinces and territories to gear up in earnest for the next phase of the national mass immunization campaign.

A UPS plane bearing thousands of pediatric doses touched down in the rain at an airport in Hamilton, with federal Procurement Minister Filomena Tassi on hand to mark its arrival.

Tassi clapped and cheered as workers unloaded massive grey containers from the upper deck of the plane.

Sunday's delivery marks the first in an accelerated shipment of vaccines geared toward children between the ages of five and 11.

Health Canada announced Friday that it had approved a modified version of the Pfizer-BioNTech vaccine for use in that demographic, and Ottawa immediately promised some shots would be on Canadian soil 48 hours later.

Tassi said on Friday that Canada would have 2.9 million doses in hand by the end of the week, enough to offer a first dose to every child in the newly approved age bracket.

The regulator said the vaccine, which is administered in a smaller dose than the adult version and has a slightly different formula, was 90.7 per cent effective at preventing COVID-19 in children and produced no identified serious side effects.

Provinces welcomed both the vaccine's approval and imminent arrival, but largely held off on disclosing plans for getting shots into children's arms until supplies had arrived.

New Brunswick issued a statement Sunday saying vaccine eligibility will be expanded to include children aged five to 11 as soon as supply of the pediatric doses are received, but the province didn't offer information about when that's expected.

Many public health units in Ontario hadn't updated their rollout plans as of Sunday afternoon, with regions including Peel, Windsor-Essex and Waterloo saying Friday that appointments were expected to open up early this week.

The Region of Durham said Friday it anticipated opening booking sites on Monday, while Toronto Public Health issued a statement Friday saying it was preparing to open 20,000 slots between Nov. 25 and Dec. 5 at city-run immunization clinics.

Manitoba was one of few jurisdictions to release booking information before Sunday. The province announced Friday that parents and caregivers could start making first-dose appointments for eligible kids by phone or online as of 6 a.m. Monday.

Sean Sedlacek, a father in Winnipeg, said he'll try to nab an appointment for his five-year-old son as soon as slots open up.

Sedlacek said he and his wife felt "an incredible sense of relief" Friday when news broke that Health Canada had authorized the pediatric vaccine from Pfizer.

Sedlacek and his wife booked appointments to get themselves vaccinated once they were eligible earlier this year, and said they want to do the same for their only child.

"We really just want to get him as protected as possible," he said. "I know the risks are a lot lower for younger kids, but you can't control what other people are doing. I just want to make sure I'm doing as much as I possibly can to keep our family protected."

In British Columbia, meanwhile, parents have already been able to pre-register their child for an appointment online or by phone. The province said more than 75,000 children had registered as of Friday, putting them on a list to be contacted for an appointment when booking opens.

Alberta announced a similar pre-registration program, adding that the province should start administering shots late this week provided the doses arrive as expected.

Saskatchewan is scheduled to release details Monday about its plans to vaccinate the approximately 115,000 children who are in the five-to 11-age group. Health and education officials are working to set up clinics at schools, and Education Minister Dustin Duncan said last week the government is also working on a plan to ensure anti-vaccination protesters don't turn up at schools as they have at hospitals.

Quebec Health Minister Christian Dubé, meanwhile, said Friday that the province's immunization plan would be unveiled this week, adding he hoped to have 700,000 children in the approved age range vaccinated with their first dose by Christmas.

Some public health units are setting up vaccine clinics in schools and expanding existing mass vaccination sites. Pharmacies and family doctors' offices are also expected to offer jabs in some jurisdictions.

Toronto has said hundreds of schools in Ontario's most populous city will host clinics, but vaccines won't be given out during class time.

Children are not to be vaccinated without parental consent.

The U.S. Food and Drug Administration approved the Pfizer-BioNTech vaccine for children on Oct. 29 and the United States has already immunized more than two million kids.

Dr. Samira Jeimy, an allergist and immunologist with Western University in London, Ont., said it can be frustrating for eager parents to be told they have to wait to book vaccine appointments for their kids.

"I don't blame parents who have been waiting at the edge of their seats — like me," she said in an interview Saturday. "I understand from the point of view of trying to keep things organized, but I feel like we should really have been ready to mobilize things."