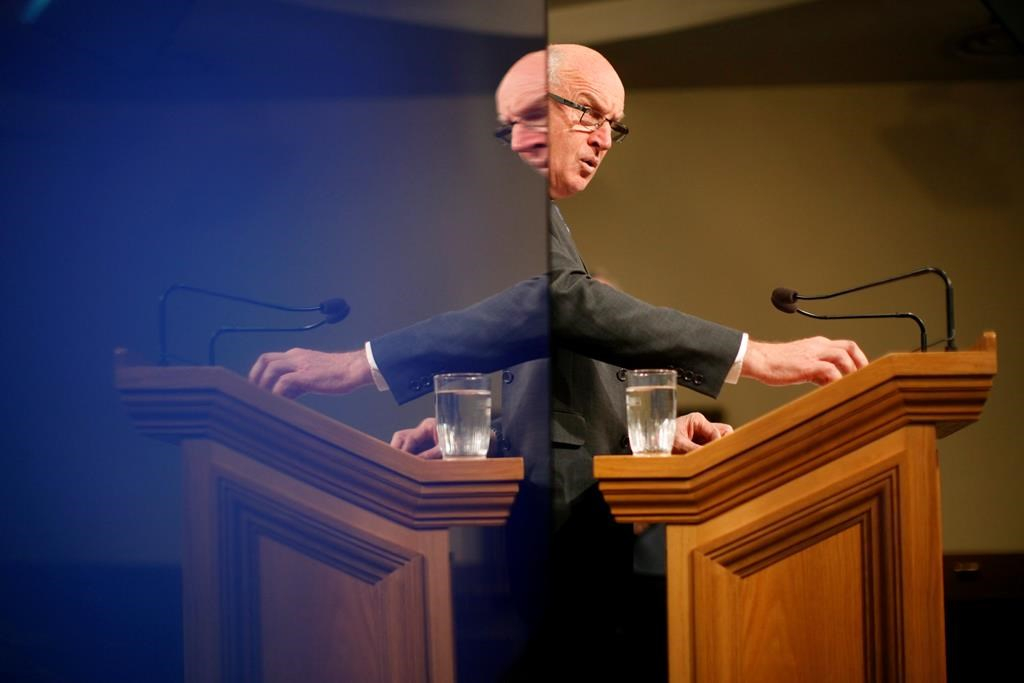 Mike Farnworth, minister of public safety and solicitor general, talks during a news conference at legislature in Victoria, on Monday, Oct. 28, 2019. File photo by The Canadian Press/Chad Hipolito
Previous story

British Columbia's public safety minister says more than 6,500 people have registered as evacuees and those whose homes were flooded last week are eligible for a $2,000 grant through the Canadian Red Cross and the province.

Mike Farnworth is asking residents to pay close attention to the weather forecast as more storms are expected after a so-called atmospheric river dumped an unprecedented amount of rain on the southwest part of the province.

The storms forced evacuations and triggered mudslides that cut off highways and crucial rail supply routes.

It warns that a new storm is expected to hit the region Wednesday night, dropping 40 to 80 millimetres of rain, before easing Friday.

The weather office says a second so-called atmospheric river is also forecast to drench the south coast Saturday, with total accumulations from both storms likely to exceed 100 millimetres.

As some evacuees from the devastating flooding were allowed to return home Tuesday, the mayor of Abbotsford said preparations were progressing for the storms.

Abbotsford Mayor Henry Braun says the city has finished inspecting its dike system and found less than one per cent needed repair after last week's heavy rainfall, and about 80 per cent of the repairs were complete on Tuesday.

"We expect another five feet (1.5 metres) of height to be added to the dike prior to the weather event anticipated for Thursday," Braun told a news conference.

"I am hopeful that this will put us in the best position to manage the rain that will come."

A week after Merritt was forced to evacuate when a river flooded into the city of about 7,000, Mayor Linda Brown announced the first phase of a three-step plan allowing people to return home.

About 1,500 residents were allowed to return on Tuesday, with certain properties remaining on evacuation alert and under a boil-water advisory.

But Brown advised residents in a post on the city's website that they would return to "a city that's changed."

Returning residents were asked to help limit pressure on key pieces of municipal infrastructure including the sewage system.

"You will be asked to use as little water as possible to preserve supplies for the fire department, and you will not have an operational hospital," said Brown.

The evacuation was ordered Nov. 15 as the Coldwater River burst its banks and overwhelmed the city's wastewater treatment plant.

This report by The Canadian Press was first published Nov. 24, 2021.