Canada's critical infrastructure must be strengthened 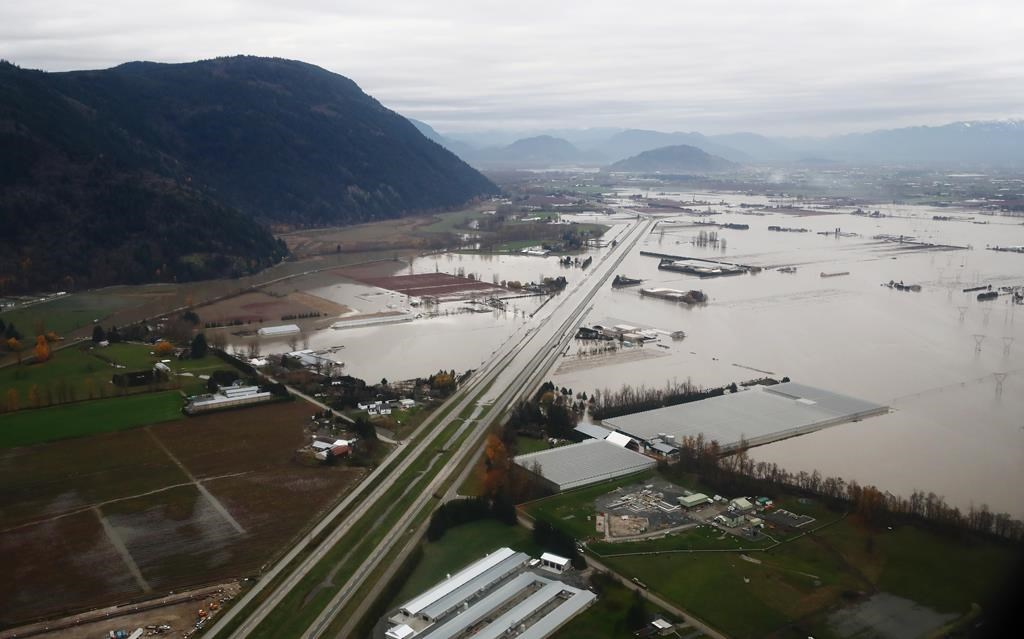 The Trans-Canada Highway and farmland is seen covered in floodwaters in an aerial view from a Canadian Forces reconnaissance flight in Abbotsford, B.C., on November 22, 2021. File photo by The Canadian Press/Darryl Dyck
Previous story
Next story

Blair said it's still too early to estimate how much it will cost to fix all the damage caused by the atmospheric river that hit B.C. earlier this month.

The storm dropped nearly 300 mm of rain on some communities in southern B.C. in less than two days, washing out major highways and rail lines, and triggering mudslides that killed at least four people. B.C. officials say repairs to some of the damaged infrastructure may take more than a year.

Blair said as the work to rebuild gets underway, Canada needs to acknowledge how quickly critical infrastructure was damaged by the storm and build back better than before.

"I think clearly, the recent events in British Columbia and the flooding that has taken place show that there's still a great deal of work to do to improve building a more resilient environment for Canadians," he said, following the cabinet meeting Tuesday morning.

"Dikes, the critical infrastructure that's in place, was very significantly impacted by this and clearly in rebuilding much of that, we're going to have to take into account these new weather events."

Blair said in the discussion about building back a greener country in the wake of the COVID-19 pandemic, attention needs to be paid to building a "more resilient country."

The Liberal throne speech Tuesday spoke of the need to prepare Canada better to withstand the floods, fires and other extreme weather which is becoming more common as the warming planet changes climate patterns.

"The government will be there to build back in communities devastated by these events," Gov. Gen. Mary Simon read from the Senate floor. "This will include the development of Canada’s first-ever national adaptation strategy."

The strategy was first promised a year ago in the updated environment and climate change plan, and in the September election the Liberals reiterated that it would be finalized by the end of next year. The 2018 budget created a 10-year, $2 billion national disaster mitigation and adaptation fund, which was expanded in 2021 with another $1.2 billion now available over the next 12 years.

In 2019, a joint report of the Federation of Canadian Municipalities and the Insurance Bureau of Canada estimated it would cost $5.3 billion a year to make Canadian municipalities resilient to the changing climate.

Both the Conservatives and NDP plan to request an emergency debate on the B.C. flooding and climate change resiliency this week, and the Liberals say they will support the requests. NDP Leader Jagmeet Singh said part of the debate needs to include the issue of adaptation.

Blair also said there needs to be an effort to communicate the risk to people, without directly mentioning the criticism the B.C. government has received for never using the national Alert Ready system which sends an alarm to cellphones in a specific area warning of danger or Amber alerts.

The system has been available since 2018 but B.C. is the only province to never issue a single alert under it, including last summer during the heat dome that killed hundreds, and burned the town of Lytton, B.C., to the ground. Ontario by comparison has sent 202, and Saskatchewan more than 100.

"I think it's really important, first of all, to communicate with people who are going to be impacted by these weather events so they can take timely action," Blair said.