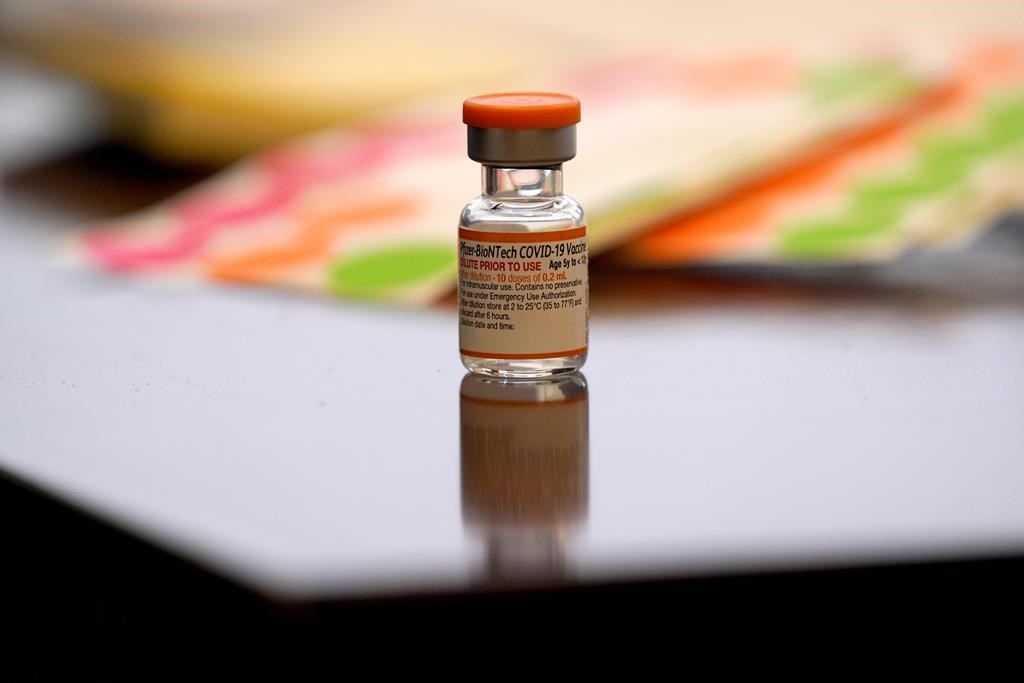 A vial of the Pfizer-BioNTech COVID-19 vaccine for children sits ready for use at a vaccination site in Fort Worth, Texas, on Thursday, Nov. 11, 2021. File photo by The Associated Press/LM Otero
Previous story

Parents in Alberta can start booking online COVID-19 vaccination times for their children on Wednesday as three more provinces announced the rollout of similar inoculation programs on Tuesday.

Alberta was joined by British Columbia and Quebec in releasing details of their programs for children between five and 11 years old. Children in Quebec will start getting their vaccinations on Wednesday.

Vaccinations begin in Alberta on Friday, while some children in B.C. will be able to get vaccinated on Monday.

Dr. Bonnie Henry, B.C.'s provincial health officer, said up to 350,000 children will be eligible for the vaccine in the province and more than 90,000 kids are already registered.

She said Health Canada has approved the pediatric Pfizer-BioNTech vaccine for use in Canada after an independent scientific review confirmed the first vaccine formulated for younger children is safe and works.

Premier Jason Kenney said Alberta has received the modified vaccine for children and will distribute doses to 120 locations over the next two days.

"The wait is basically over," Kenney said Tuesday, adding that 391,000 children in Alberta are eligible.

He urged hesitant parents to seek out information on the efficacy of the vaccine, which Health Canada says is almost 91 per cent effective with no identifiable side-effects.

Early uptake of the vaccine for children has been overwhelming in many provinces, including Manitoba, Ontario and Saskatchewan. Tens of thousands of parents have booked online appointments for their kids.

In Quebec, Premier Francois Legault said he understands parents may have worries about vaccinating their kids against COVID-19 but he offered assurances that the shots are safe.

Vaccination for children between five and 11 years old will begin Wednesday at mass vaccination centres and next week in schools, Legault told a news conference. The two doses of vaccine will be given at least eight weeks apart, the premier said.

"I am putting myself in the position of parents and I can imagine it can bring certain concerns," he told reporters in Quebec City. "I want to reassure parents."

Ten children rolled up their sleeves in Toronto on Tuesday to become the first to receive child-sized doses of COVID-19 vaccines in Ontario, hours after families went online to book the long-awaited shots.

"They really, truly were superheroes, coming forward to receive the vaccination," she said. "They're protecting not only themselves but their friends and their grandparents and parents and their community."