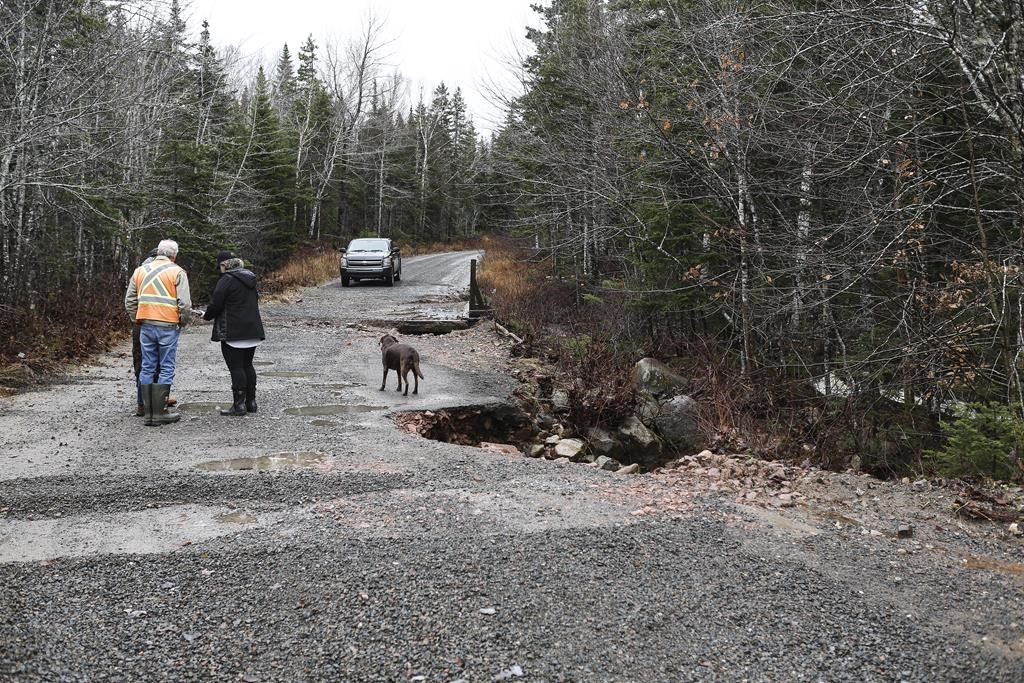 HALIFAX — Atlantic Canadians living along highways severed by this week's torrential rain say it's past time for governments to focus on retrofitting roads to ensure they can survive deluges that are predicted to become more frequent.

"This was a wake-up call, and we're probably going to need a few wake-up calls before we start getting ready for it," Peter MacGillivray said on Wednesday after two culverts on Highway 245 near his home in northern Nova Scotia were taken out by the latest storm.

The 59-year-old said he's using his four-wheeler and a forest road to get from his home to an undamaged portion of the highway after the culverts were unable to withstand about 116 millimetres of rain over two days.

In southwestern Newfoundland, which was battered by the same storm, Joe Murphy said the winding rural roads along the coast were already in poor condition, and locals have been saying for years that upgrades were needed.

"If we're going to have monstrous storms and we have poor infrastructure, obviously it's going to cause significantly more damage," the resident of Codroy, N.L., said in an interview Thursday.

Nova Scotia reported on Wednesday that 25 roads were washed out in three counties, with northern Cape Breton the hardest hit. Meanwhile, in southwestern Newfoundland, the storm closed portions of the Trans-Canada Highway and isolated some communities.

While provincial officials say new road building is taking climate change into account, Canadian experts argue that engineers have to do more to evaluate the risks — and both Ottawa and the provinces need to spend more to avoid repeated incidents.

A federal climate change report released in April 2019 said the consensus of Canadian researchers is that the number of extreme rainfall events, lasting over several days, is expected to rise on the East Coast. The report said if current global carbon emissions continue, Atlantic Canada will experience a 12 per cent increase in annual precipitation over the next century, and a 30 per cent increase in one-in-10-year storms that produce large downpours of rain.

Slobodan Simonovic, director of engineering studies for the Institute for Catastrophic Loss Reduction, said a fundamental rethink is needed on how to design roads to adapt to these forecasts. "Everything that is happening in Canada, we are repeating the same mistakes, and I'm puzzled that message isn't reaching anyone," said Simonovic, an engineering professor emeritus at Western University in London, Ont.

Instead of relying on standards that use historic information to size culverts or specify the roadbed materials, he said civil engineers should be doing "performance-based" calculations of how a given section of roadway can survive storms. "We need to simulate a given structure under various conditions ... and I'm usually recommending we then choose an option that can maximize the resilience of the structure," he said.

While provincial officials say new road building is taking climate change into account, Canadian experts argue that engineers have to do more to evaluate the risks. #ExtremeWeather #AtlanticCanada

Blair Feltmate, head of the Intact Centre on Climate Adaptation at the University of Waterloo, has noted that there are well-established ways to adapt existing roads to heavy precipitation events.

Those include protective berms, channels to divert storm waters from highways and holding ponds to keep water in safe locations. There may also be methods to place natural features near roads to absorb water before it spills onto the pavement, he said, and systems can be put into place to clear debris in culverts and prevent blockages.

"We know what to do. The problem is we're not deploying the actions to mitigate flood risk," he said in an interview Wednesday. "We've been living delusionally."

Tim Webster, leader of the applied geomatics research group at Nova Scotia Community College, says improved computer modelling is needed to predict the risk of heavy rainfall for roads. It needs to cover the entire province, he said, rather than "the fragmented patchwork that exists today."

However, Peter Hackett, the deputy minister of public works in Nova Scotia, said in an interview Thursday his engineers are sizing ditches and culverts to withstand the harshest storms of the past 100 to 200 years, and also are taking into account how steep the land is near the roads.

"On our new builds we try to take these things into account with localized calculations ... on how we can catch the water without it destroying infrastructure," he said. It's more difficult to retrofit older roads that run around mountains and along coastlines to protect them fully from runoff, he added.

As for improving modelling, Hackett said the department hasn't yet mapped the entire network for climate risks, but he supports the concept.

"We're doing the work we can. I think we do a good job of it, and when things do happen, we have to get out there and get them fixed. But we are trying to get ahead of it," he said.

This report by The Canadian Press was first published Nov. 26, 2021.

— With files from Danielle Edwards