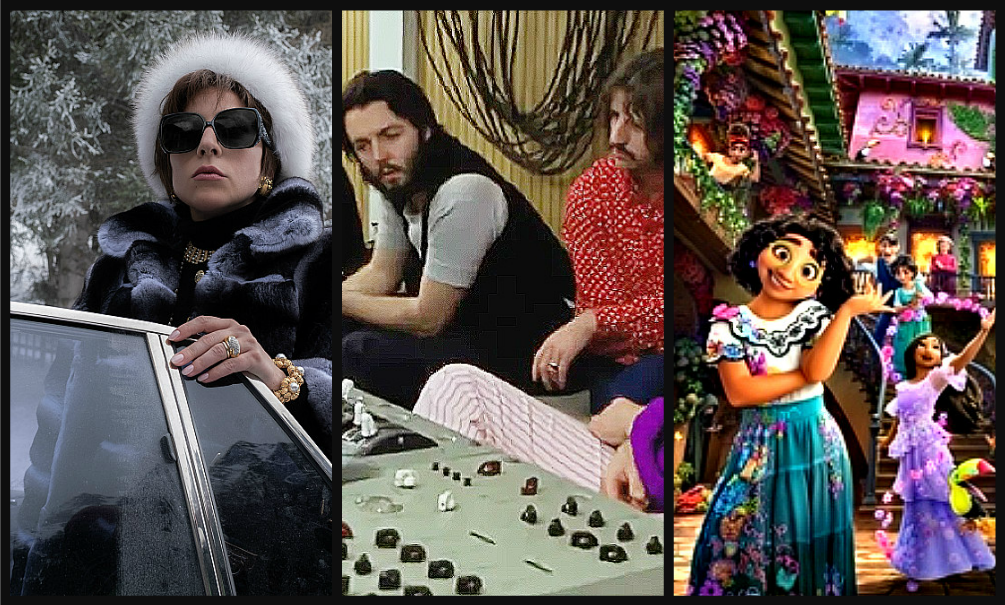 It happens every American Thanksgiving: a flood of new film releases. I've covered many of them today, but notice this too. All the Harry Potter films have been added to the CRAVE streaming service. If that's not enough, the Whistler Film Festival starts Wednesday. It plays in theatres through the weekend and on streaming to the end of the month. I'll have a review or two next week but meanwhile, you could check out what is playing by going to this site.

And while you're here, read about these...

JFK Revisited: Through the Looking Glass: 4

HOUSE OF GUCCI: Ridley Scott gets across the lurid true story, the luxury and the glamour, but not a lot of emotional connection. But then he's not known for that anyway. (Maybe in Thelma and Louise, not so much in Gladiator, Alien and others.) But he does draw us in with a good yarn and star power. Lady Gaga plays the secretary who married into the Gucci family of Milan, Italy. Adam Driver is the man she snagged, whose father (Jeremy Irons), sensing she's only after his money, cuts him off and by doing that encourages him into a scheme to grab the fashion house away from the control of his uncle (Al Pacino). There's a competing cousin (Jared Leto), but he's seen as eccentric, unfashionable and to his father “an idiot.”

Great opportunity opens up there for Lady Gaga's Patrizia. She befriends those two and gets back in with the family. She stirs her husband to try for control and kicks off a terrific saga of deception and betrayal, infighting and then hired killers and murder. While all this is going on, the Gucci brand needs revitalizing and an American, Tom Ford, arrives from Texas and hovers. The acting is first-rate: Gaga, Driver, Pacino and especially Leto. The settings are glitzy and though the film slows down a bit in the middle, the strong beginning and end make up for that. Strife among the stylish rich is, as it often is, a good show. (5th Avenue, Scotiabank, Dunbar, Marine Gateway and suburban theatres.) 3½ out of 5

THE BEATLES: GET BACK: If you liked the Beatles, you'll love this. If you can last, that is. It comes in three parts and runs for more than seven hours. Only the first part drags, though. Peter Jackson, well-known for lengthy treatises, just couldn't drop out some of the scenes he had to work with. There were over 60 hours of film for him to draw on, shot back in 1969 for a documentary that was also called Get Back, but was much shorter and not fun and playful like this one. Here you see the Beatles as you envisioned them: John is always quick with a joke, Paul is sincere, George is in the back, and Ringo is perky. You look for splinters because you know the band would break up soon. And yes, George walks out (but eventually returns). Paul is a controlling type, probably because he wanted the project to move ahead while much of the time was being taken up with goofy banter and indecision.

The plan was to write songs for a new album and record them before an audience. They hadn't played live in two years. So we get close-up scenes of a band fooling around, but at times working hard. Paul writes Long and Winding Road before our eyes and Get Back over many days. In one version, as a put-down of anti-immigration activists. There must be a hundred songs they do, mostly fragments but many full. Bye Bye Love, for instance, You Are My Sunshine, and various '50s hits. Also, songs of their own that I've never heard of before, like I Bought a Piano. Stick with it and you'll get a treat in Part 3: the rooftop concert their big plans devolved into. While they sing, people gather on the street below, making pro and con comments, and police try to get upstairs to shut the music down. It's high drama. The cinematography through all the hours is crisp, the film has been sharpened up, and the editing is exceptional. Best of all, it gets across the joy the Beatles conveyed. (Disney+) 4½ out of 5

ENCANTO: Disney's 60th animated film is a charmer, but a lame one. The theme is the old favourite, the importance of family, but it's so crowded with characters, limp storytelling and magic realist elements that it doesn't have the emotional impact it should have. It does have diversity, though, set as it is in Colombia, with pop stars and actors with roots there providing voices and Lin-Manuel Miranda proving a batch of new songs. His heritage is Puerto Rican, but he travelled to Colombia to research the music and infuses a folk-song feel into his tunes, which of course, advance the story in his usual way.

The title means enchantment and that describes the life of the Madrigal family and the house they live in. Everyone has a magical power bestowed at age five. Super-strength, shape-shifting, power to make plants grow, talk to animals, and so on. Except Mirabel (Stephanie Beatriz). She doesn't have one and feels shame. From that promising start, the story becomes thick and elusive. There's a reference to colonialism (too brief, though), and a banished family member (Bruno, voiced by John Leguizamo, who does have Colombian roots) and cracks in the walls of the house that only Mirabel can see. Metaphorical, yes. Strained? Also yes. She'll have to rise, throw off her self-doubts and save the family. Good story arc, bright songs and beautiful animation aren't enough. Better connection is needed. (International Village, Marine Gateway and many suburban theatres.) 3 out of 5

JFK REVISITED: THROUGH THE LOOKING GLASS: Thirty years after his film JFK, Oliver Stone presents more doubts, accusations and signs of a coverup in the John F. Kennedy assassination. Whether they really stick or not is up to you, but the film is compelling to watch and the evidence looks authentic. Some of it is new, based on declassified documents, a congressional committee investigation and the book Destiny Betrayed by James DiEugenio, who also wrote the script.

The Warren Commission's conclusion that there had been only one shooter and no conspiracy gets severely attacked, including the notorious “magic bullet” theory. It was said to have gone through Kennedy, changed direction and hit Gov. John Connelly, including a bone, and when found later on a stretcher in Parkland Hospital, showed almost no sign of impact. The official list of people who handled or inspected it includes at least one who never saw it. The film shows autopsy photos and disputes the official findings of which were the exit and the entry wound. It cites witnesses who were not called to testify and cites two other plots against the president. The commission didn't investigate them. The film concludes it was a cover-up and Robert Kennedy Jr. recalls his dad saying it was “a right-wing plot.” It's potent stuff, narrated by Whoopi Goldberg and Donald Sutherland. He, you might recall, was an actor in the JFK film. (In England, it plays in theatres. Here it's streaming on CRAVE.) 4 out of 5

BRUISED: Female empowerment is in here in a couple of ways, but careful, there's brutality in bringing it out. First, it's a directing debut for Halle Berry, who also stars as a mixed martial arts fighter. She brings us several bouts of tough, pain-depicting action. Kicks and punches, and bloody faces, the whole thing. Berry shows talent both calling the shots and dishing out and taking the hits.

Outside the cage, she's got a gritty story to play, She's ejected from the sport and has to find her way back. She has to defy her volatile boyfriend/manager, who she calls a “full-time loser, and go with a promoter who trains her for a reputation-making title bout. It'll make money, but is a sure lost cause because it's against the toughest female fighter in the world, Lady Killer, played by a real-life UFC champion Valentina Shevchenko. Not surprising: the fight scenes look real. Halle, nicknamed Pretty Bull, has other problems too. A son she gave up for adoption comes back to her and she has to bring him out of a trauma that's come over him. She also has to patch things up with her own mother. That's a lot in the way of her own redemption. The film struggles to get there. (Netflix, after a brief theatre run.) 3 out of 5

In his story, a teacher and her husband make a sex tape and it lands on the internet. A computer repairman may have put it there. Staff and parents at the school are horrified and call a meeting where the teacher has to defend herself. She did nothing illegal. She didn't even make the tape public. But what about your pupils? she's asked. They've seen it. How did they get it? They've been damaged. How? They've lost respect for their teacher. So goes the debate that gets more and more heated as parents spout anti-sex, homophobic and even anti-Semitic remarks. And apologies for Stalin and Hitler. Radu contrasts their complaints with all sorts of bigger real cruelties in society. Where he goes overboard is in showing the sex tape and other sex scenes. They're graphic, close and sometimes kind of gross. IMDb has a complete list (eight scenes) if you're interested. (Vancity Theatre, along with Radu's previous films.) 3 out of 5

RESIDENT EVIL: WELCOME TO RACCOON CITY: Fans of the popular video games will recognize that it's not a silly title. It's a reference back to the early instalments in the series and the location they're supposed to be set in, the small town controlled by a dodgy pharmaceutical company, the Umbrella Corporation. It's been seen in multiple editions (13 games and now 12 films, by my counting). It's the most successful series ever based on a video game. The so-called final chapter was two films ago.

This new one goes back to explain how it all started 25 years ago. It repeats events from games 1 and 2. Director Johannes Roberts says he played the games for years and wanted to bring out parts of the story and some characters not seen before. So we have a race against time because the Umbrella Corporation plans to destroy the town rather than deal with an environmental mess. There are many characters, but at the centre, there's a pair of siblings who root out that information. Claire (Kaya Scodelario) long ago escaped from a local orphanage run by the corporation. Chris (Robbie Amell) is a cop. They've been estranged for years and now have to work together to fight off what the company has done. Hint: poisoned water and zombies. Caution: lots of gore. But many Easter eggs for the fans. (International Village and many suburban theatres.) 2 out of 5

Connecting the dots on climate health

For Beatles fans, I highly

For Beatles fans, I highly recommend the documentary series "McCartney 3 2 1". Especially if you're a Beatles fan who is also a musician.