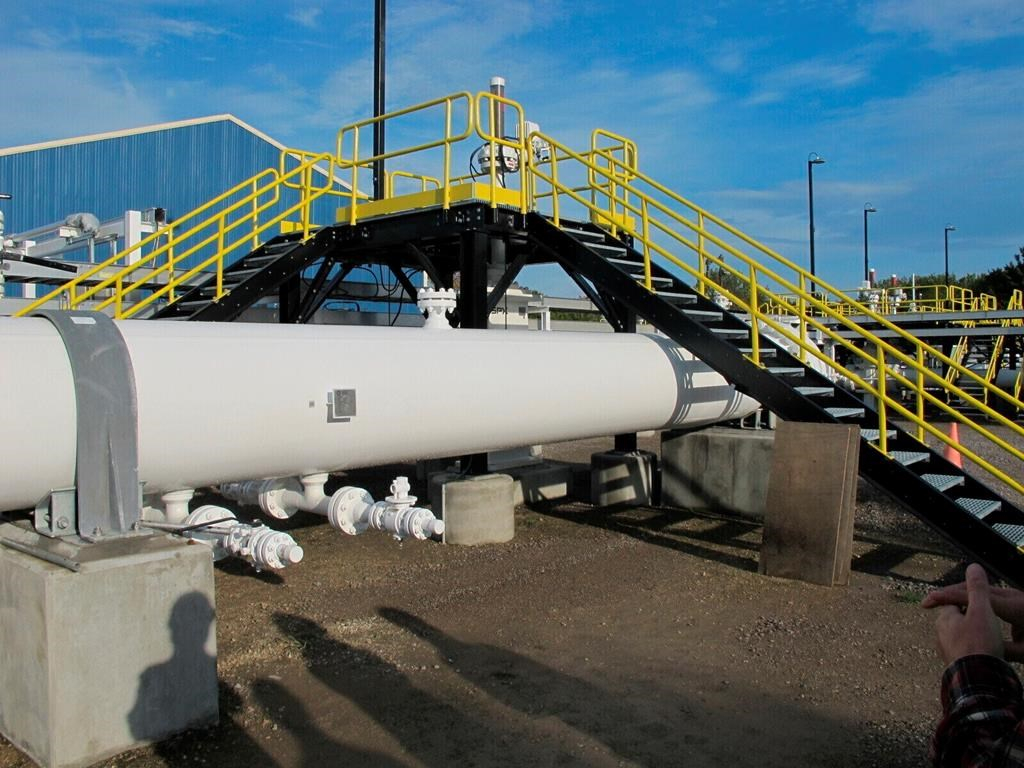 An aboveground section of Enbridge's Line 5 at the Mackinaw City, Mich., pump station is shown in October 2016. File photo by The Associated Press/John Flesher
Previous story
Next story

Instead, Attorney General Dana Nessel says Whitmer will concentrate the government's efforts on a long-standing state court action against pipeline owner Enbridge Inc. that was originally filed in 2019.

In a statement, Nessel says the original case remains the "quickest and most viable path" towards getting Line 5 permanently decommissioned.

Michigan's efforts suffered a blow earlier this month when a U.S. District Court judge sided with Enbridge and allowed Whitmer's case to remain in federal court.

Last November, Whitmer revoked the 68-year-old easement that allowed Enbridge to operate the line, fearing an environmental catastrophe in the Straits of Mackinac, where Line 5 crosses the Great Lakes.

The National Wildlife Association cheered the decision to abandon the court case, calling Line 5 a "ticking time bomb" and supporting Nessel's motion to reopen the 2019 action.

"We’ve had enough of this Canadian corporation and the Canadian government itself tying up Michigan’s efforts to protect our Great Lakes from a catastrophic oil spill," regional executive director Mike Shriberg said in a statement.

"Line 5 is a ticking time bomb and this move to cut through Enbridge’s legal delay tactics is the best way to move forward to protect the Great Lakes."

Nessel said she and Whitmer remain "aligned in our commitment" to shut down the pipeline, "and this dismissal today will help us advance that goal."

"I fully support the governor in her decision to dismiss the federal court case and instead focus on our ongoing litigation in state court," Nessel said. "The state court case is the quickest and most viable path to permanently decommission Line 5."

Canada said earlier this month that planning was "well underway" for bilateral treaty talks between Canada and the United States in the dispute over the pipeline, although the timeline for formal negotiations remains unclear.

The treaty is a 1977 agreement between the two countries that's meant to avoid disrupting the cross-border flow of energy, and proved to be a key element in Enbridge's strategy to convince the U.S. District Court that a bilateral dispute belonged in federal court.

Should formal negotiations fail, the next stage of the dispute resolution process would be binding international arbitration.

Canada opted to formally invoke the 44-year-old treaty last month after talks involving a court-appointed mediator broke down between the two sides.

Enbridge welcomed Michigan's decision to abandon the federal court case, saying in a statement the company would continue to press for affirmation of federal jurisdiction over Line 5.

The White House has acknowledged that the U.S. Army Corps of Engineers is conducting an environmental assessment on Enbridge's plans to encase the underwater portion of the twin pipeline in a deep, fortified underground tunnel. But they have resisted pressure to get involved in the dispute itself.

Line 5 ferries upwards of 540,000 barrels per day of crude oil and natural gas liquids across the Canada-U.S. border and the Great Lakes by way of a twin line that runs along the lake bed beneath the straits linking Lake Michigan and Lake Huron.

Proponents call it a vital and indispensable source of energy — particularly propane — for several Midwestern states, including Michigan and Ohio. They also say it is a key source of feedstock for critical refineries on the northern side of the border, including those that supply jet fuel to some of Canada's busiest airports.

Critics want the line shut down, arguing it's only a matter of time before an anchor strike or technical failure triggers a catastrophic environmental disaster in one of the area's most important watersheds.

This report by The Canadian Press was first published Nov. 30, 2021.