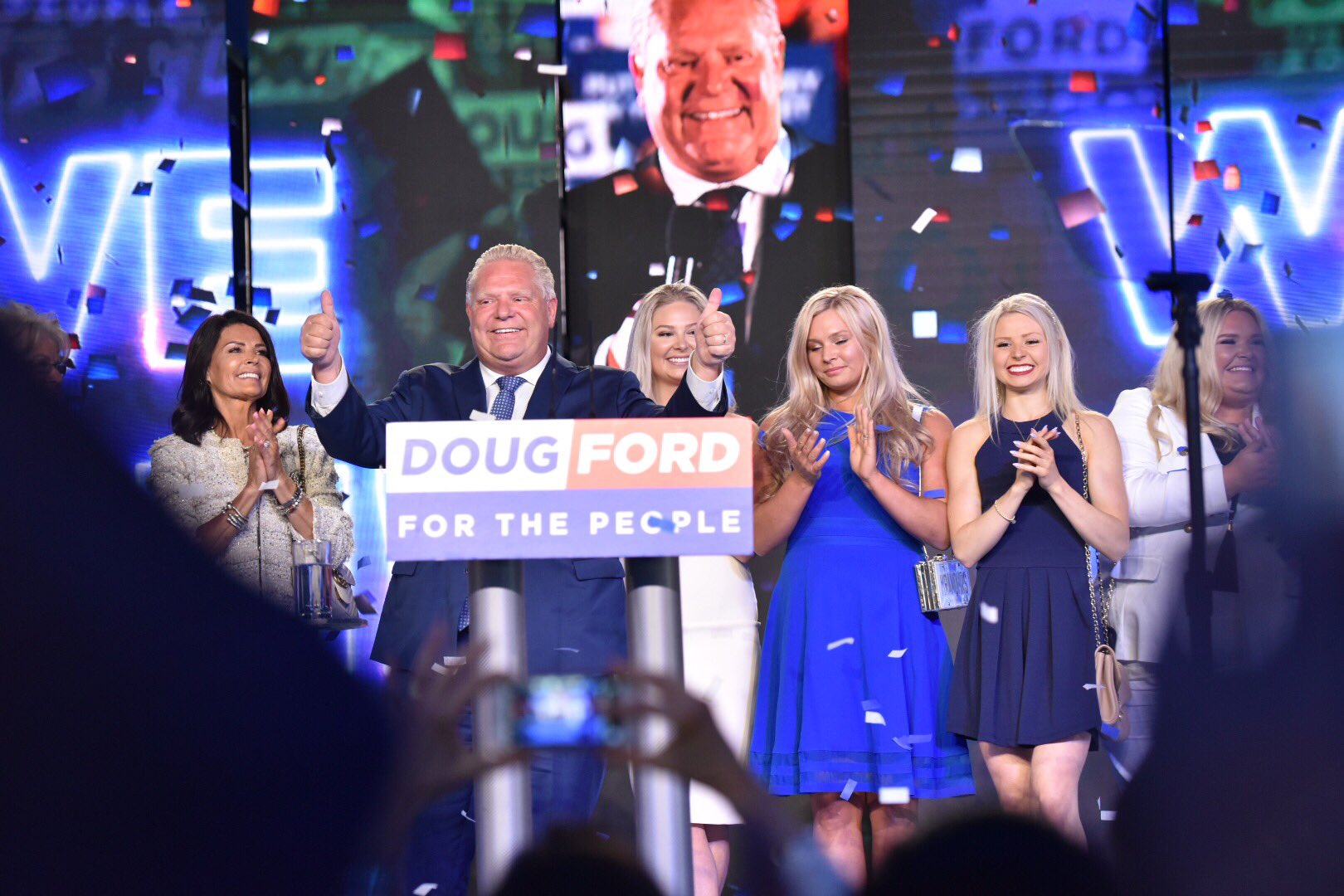 Doug Ford styled himself a populist in 2018, brandishing the “For the People” campaign slogan, but has since reversed himself on key policies he criticized while running for office. Photo via Doug Ford / Flickr (CC BY-SA 2.0)
Previous story

They say imitation is the sincerest form of flattery.

If this age-old adage is to be believed, then former Ontario premier Kathleen Wynne ought to be awfully flattered these days.

That’s because over the course of the past few weeks, Premier Doug Ford’s Progressive Conservative government has begun implementing policies Wynne boldly committed to more than four years ago — policies Ford expressly opposed in the 2018 election he won handily.

But a week can be a lifetime in politics, let alone a four-year period.

At the end of the day, the objective of any incumbent premier is to win re-election.

And more often than not, the ends justify the means — even if that means tacitly admitting your government got it wrong on many of the seminal issues of the day.

The premier and his top campaign officials are hoping Ontarians have forgotten about some of their government’s wrong-headed positions, and betting voters will give them credit for ultimately embracing more progressive policies — albeit at the 11th hour with an election just around the corner.

While he styled himself a populist in 2018 — brandishing the “For the People” campaign slogan — in the ensuing years, Ford’s folksy rhetoric has rarely matched his government’s penchant for enacting policies that entrench the interests of the most well-heeled corporations and individuals.

But since Labour Day, Ford has reversed himself on three key policies — ostensibly for political gain among an electorate increasingly looking for robust government intervention amid an ongoing global pandemic that has exacerbated the province’s economic and social inequalities.

Earlier last month, the Ford government announced it would raise the minimum wage to $15 an hour on Jan. 1. This policy, which clearly sets out to help those most in need, originally passed in 2017 under the Wynne government.

But just four months into its mandate, Ford’s government passed legislation to repeal key sections of the Fair Workplaces and Better Jobs Act. To add insult to injury, the PC caucus gave the premier a standing ovation when the legislation ultimately passed — a disgraceful show of partisanship that had dire consequences for Ontario’s most vulnerable.

In 2017, the Wynne government passed Bill 160: Strengthening Quality and Accountability for Patients Act, which set out amendments to the Long-Term Care Homes Act of 2007. The legislation strengthened government oversight over the facilities and allowed for harsher administrative penalties against homes found to be delivering substandard care — something that became all too commonplace throughout the pandemic.

Then in late October, Ford once again parroted previous Liberal policy in announcing similar legislation. Unfortunately, the only reason Bill 160 wasn’t already in place when Ford changed course was due to the fact his government never enacted the measures in the bill after winning the 2018 election.

Finally, the Ford government appears poised to reverse course on child-care policy. In the aftermath of the federal election that saw Justin Trudeau’s Liberal Party returned to government, eight provinces and one territory led by premiers of every political stripe have signed on to the federal government’s national subsidized child-care program.

While Ford and Trudeau have not yet reached a deal, Queen’s Park observers are now speculating the premier is deliberately keeping his powder dry in hopes of making a media-friendly announcement with the prime minister over the coming weeks or months when the election campaign is in clear sight and on voters’ minds.

But for those with longer memories, it bears underlining that in the 2018 election, Wynne’s Liberals ran on free child care for kids aged 30 months to four years, with subsidies available for younger children. Like with other Liberal policies, Ford’s PCs stridently opposed these commitments and won big on election night in spite of a largely vapid policy platform.

It’s ironic that whatever child-care plan Ford and Trudeau ultimately agree to will almost certainly be similar to the one the premier initially opposed less than four years ago on the campaign trail.

As we approach an Ontario election in six months, Ford’s PCs are increasingly imitating their predecessor government’s record — so far with little political blowback.

A Postmedia-Leger poll released on Nov. 20 found 34 per cent of respondents planned to support Ford’s PCs in the upcoming Ontario election, compared to 31 per cent for Steven Del Duca’s Liberals and 26 per cent for Andrea Horwath’s NDP. While these numbers suggest a close race between the PCs and the Liberals, the same poll showed Ford’s PCs with a double-digit lead over their nearest opponent in the seat-rich Greater Toronto Area.

While embracing some major aspects of your predecessor’s agenda might be seen as shrewd among some political strategists, you can bet that as election day nears, Ford’s opponents will be investing considerable political capital into demonstrating these are policies he actively opposed until it was no longer advantageous for him and his party.

The premier will also need to explain to bedrock PC voters who supported cancelling these programs why he has changed his tune almost overnight. Even more challenging, Ford will face an uphill battle convincing centre-left voters that his embrace of these policies is principled and not merely for political gain.

At the end of the day, the vast majority of progressive voters will want to cast their ballots for the real deal — a Liberal or NDP government — and not for a Conservative party masquerading as “progressive” in the dying days of its four-year mandate.

If Ontarians ultimately choose to re-elect the Ford government this June, that will be their prerogative. But they needn't do so under false pretences.

Whatever their politics, voters must understand the entirety of this government’s record in office.

Ontarians cannot allow Ford’s PCs to “pull the wool over their eyes” while they’re still emerging from the COVID-induced fog of the past two years. The result would not only be alarming for our democracy, but for the province at large.

Doug Ford, the charter and what’s at stake

Great article (too bad the

Great article (too bad the National Post will never pick it up).
The expose here (as hollow and self serving it is for the Ontario PC Party and Doug Ford) is nothing compared to the environmental debacle that he and his minions has foisted onto he backs of Ontario and it's citizens. Thankfully, the main stream press did report on the recent shameful story brought to light by the provinces's Auditor General report on the environment. The horrendous environmental record of the Ford government (which incidently began before he even officially took office) should be the biggest issue of the 2022 election. My bet is that Ford will attempt to greenwash his way into another term. Let's not let him fool everybody twice!

This is a classic example of

This is a classic example of progressives splitting the vote, all because of their "narcissism of small differences." When will they figure that out, it's kind of basic math, particularly when it's the main reason that stupid conservatives keep winning.

And yet, if it weren't for

And yet, if it weren't for that "narcissism of small differences", the Liberal party would not be what it is, now and then doing something useful, but rather would be the US Democratic party, utterly incapable of any action their corporate bagmen disapprove of even if it's massively popular. The existence of the NDP is the only thing that keeps the Liberals even a smidgen honest.

I simply could not agree more

I simply could not agree more. Why they can’t unite and defeat a guy who will win with 34% of the popular vote is beyond me.

And yet we progressives are

And yet we progressives are the cynics. The most amoral administration this province has seen, and we have had some stinkers in the past. For anyone interested, take a gander at the autism waitlist that has grown to almost double what it was when they promised to eliminate it. And that’s just one example of broken promises and outright lies.