Not all Canadian airports prepared for new COVID testing regime 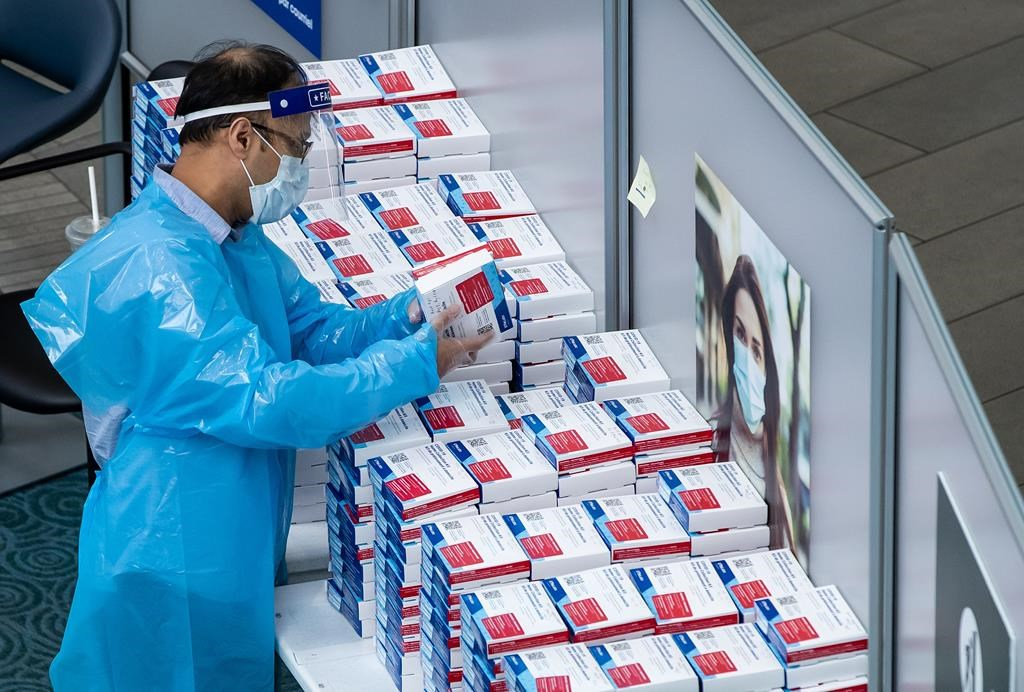 A worker picks up a COVID-19 self collection test kit which are given to arriving international passengers at Vancouver International Airport, in Richmond, B.C., on Friday, July 30, 2021. File photo by The Canadian Press/Darryl Dyck
Previous story
Next story

Not all Canadian airports will have the capacity to immediately begin testing arriving air travellers from countries other than the United States for COVID-19, the federal health minister said Wednesday.

Ottawa announced on Tuesday that all air travellers entering Canada, except for those coming from the U.S., would need to be tested for COVID-19 upon arrival at the airport and isolate until they get their results, even if they are fully vaccinated against the virus.

The stricter measures come as public health officials around the world warn of the potentially dangerous new Omicron variant of COVID-19.

"The directive to put that into place is now active. So the direction is given as of yesterday. And of course that will take time to implement; it will take time," Health Minister Jean-Yves Duclos said Wednesday.

"The speed of implementation will also vary in local airport conditions. There are airports in Canada which can start doing that really quickly because there is excess capacity. Other airports will take a bit more time."

Duclos didn't offer any additional details on when the full testing would be up and running. Officials in his department were unable to offer a specific timeline.

On Tuesday, as he and other cabinet colleagues unveiled the new testing measures, Duclos made clear the federal government would cover the costs of the tests, and that all previous COVID-19 testing requirements would remain in place.

The other unknown hanging in the air Wednesday was whether Canada would require currently exempt American air travellers from the testing requirement, or whether the U.S. would reimpose its own travel ban on Canada given that British Columbia, Ontario, Quebec and Alberta have all reported cases of Omicron — all involving people who recently returned from Nigeria.

The federal government has also closed its border to foreign nationals who have recently travelled through 10 African countries, including Nigeria.

Dr. Anthony Fauci, director of the U.S. National Institute of Allergy and Infectious Diseases and Joe Biden's chief medical adviser, said Wednesday that he has recommended to the president that everybody coming in to the U.S. be required to take a COVID-19 test.

Not all airports ready to give new COVID-19 tests to air travellers, says @jyduclos. #CDNPoli #COVID19

"You know that the new regulation, if you want to call it that, is that anybody and everybody who's coming into the country needs to get a test within 24 hours of getting on a plane to come here," Fauci told the White House briefing Wednesday.

Experts suspect it will take weeks before scientists know whether Omicron is more transmissible, leads to more severe disease, or is capable of evading vaccine protection.

Transport Minister Omar Alghabra said Wednesday that it was too early to say whether Canada's latest requirement to test arriving air travellers for COVID-19 would be extended to included U.S. passengers.

The federal government is in discussions with the provinces on that issue but is ready to act to implement such a requirement for incoming U.S. air travellers if necessary, he said.

"We made a decision right now about testing every traveller coming in from around the world other than the U.S. We are having discussions," Alghabra said.

Alghabra said a decision would be based on "the epidemiology in the U.S., around the world."

Ontario Premier Doug Ford was noncommittal on Wednesday about whether the testing requirement ought to be extended to include the U.S.

"The U.S. will have further discussions with the federal government and the other premiers, and the territories as well, to get their input, because it doesn't just happen in Ontario. It's right across the border," said Ford.

Ford said he was pleased the federal government acted so quickly after he "implored them" to take decisive action after the new variant emerged.

As the work continues to determine whether COVID-19 vaccines are effective against the new variant, Ford said "the best thing we can do right now is to fortify our borders. Our best defence is keeping the variant out of our country."

As for the latter, he said: "now, what’s left to show us is when he’ll start that."

Public Safety Minister Marco Mendicino said Wednesday that pre-departure tests obtained in the 10 listed African countries are no longer valid and those returning to Canada after travelling through those nations must be tested in a third country.

He said mandatory testing for all air travellers, with the exception of those arriving from the U.S., "will be coming in the very short-term."

— with files from James McCarten in Washington, Allison Jones in Toronto and Morgan Lowrie in Montreal.