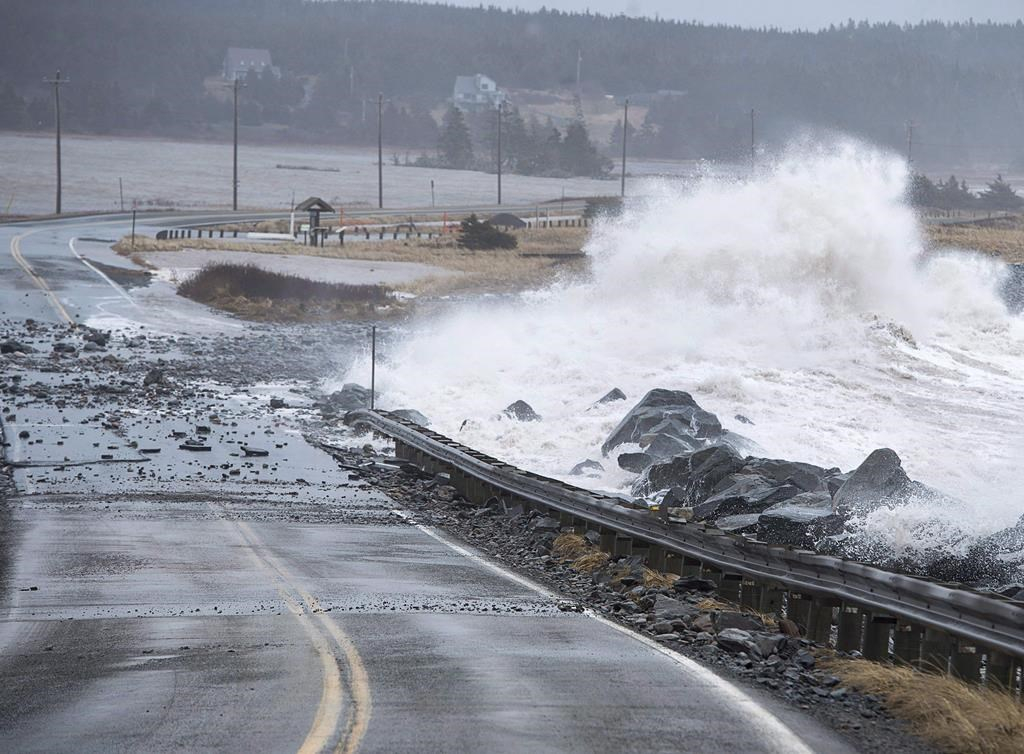 Waves pound the shore on a closed section of Highway 207 in Lawrencetown, N.S. on Friday, Jan. 5, 2018. File photo by The Canadian Press/Andrew Vaughan
Previous story
Next story

For Darlene Norman, being a municipal leader faced with what the author of a new study sees as Ottawa's piecemeal approach to climate-related flooding feels like drowning in ever-rising seas.

"It's like we're here, floundering," said the mayor of the Region of Queen's County — a lightly populated region on Nova Scotia's south shore, which is at increasing risk of storm surges as Atlantic Ocean levels creep higher.

"It's the municipalities that have the most money and the most staff that will be receiving the most (federal) assistance," Norman said in an interview Sunday.

"It should be the opposite way around. Ottawa should have a specific department which evaluates regions of greatest risk. ... There needs to be one Canadian standard level of evaluation for where the funds go."

A study released this weekend by the Intact Centre on Climate Adaptation, based at Ontario's University of Waterloo, found Canada lacks a national planning system or standard classifications compared to other countries. Such systems can be used to evaluate risks to coastal areas and plot the wisest path forward.

The key conclusions of the 94-page report, called "Rising Seas and Shifting Sands," call for the federal government to develop national standards, particularly for natural solutions that range from dune restoration to re-establishment of marshlands.

"perhaps the greatest challenge in Canada ... is a limited sense of urgency to act," the report concludes.

Joanna Eyquem, a Montreal-based geoscientist who authored the report, said in an interview that Canada is about a decade behind the United Kingdom, which has had detailed flood mapping available to every address since 1999, as well as a detailed plan for each of 22 shoreline management areas overseen by a national agency.

"We don't have strong departmental leadership. It's piecemeal at the moment," said Eyquem.

She also said smaller communities often face complex problems and a lack of staff to make applications to funding systems such as Ottawa's Disaster Adaptation and Mitigation Fund, created in 2018 and with funding added this year.

Her report notes that in some coastal regions, extreme storm surges can be over one metre higher than tide levels. In Atlantic Canada, projections indicate the Gulf of St. Lawrence will be free of winter sea ice by the end of this century — resulting in increased wave heights and more winter storm surges.

Yet municipalities seldom have the expertise to know what combination of measures would be best suited to tackle climate-related risks over the next century.

The study says combinations of natural systems, such as natural-fiber blankets used to stabilize soil or engineered "hard" or "grey" infrastructure like seawalls, are available to protect communities from sea-level rise.

Liverpool has seen downtown inundations in recent decades due in part to infilling of the harbour to create a parking lot and park — which increased the flow of water into the community during storm surges.

Consultant's recommendations for addressing the problems included building a seawall, raising the level of a municipal parking lot and purchasing several affected buildings so they could be demolished. The cost of the various options range from $2.8 million to $9 million.

Norman said her council chose the least expensive option, accepting that flooding will continue into the low-lying area of the downtown core. The municipality will provide funding to raise the level of a town street to ensure it would remain passable to emergency vehicles.

The mayor said her municipality's ability to apply for federal funding for wider mitigation of flood risks — both for Liverpool and other communities in her municipality —is challenged by the reality of a small staff already loaded with regular duties.

"It takes months of one person's work to get the paperwork in. It should be a national system where if we ask someone to come and evaluate our need, they come down and evaluate objectively which areas need the assistance," Norman said.

As communities struggle to cope, some conservation groups are filling the gaps with programs to assist individual homeowners to certify their homes as equipped to deal with the rising seas and erosion.

Izzy Clarke, a senior field technician with the Coastal Action group in Mahone Bay, N.S., said she's been assisting homeowners with the Green Shores Project, which is piloting certification programs for Nova Scotia homeowners who want to reduce chances of flooding and coastal erosion on their land.

"Homeowners are looking down the barrel of climate change and are thinking, 'I can invest now and spend some money and deal with these predictable events,'" Clarke said.

But like Norman, she believes governments must move towards creating set standards, and the province needs to finalize its Coastal Protection Act — which would set firmer regulations to keep builders from putting up structures in areas the seas may one day reclaim.

"A lot of individual people are working on these coastal issues, but there's room for more co-ordination," she said.

This report by The Canadian Press was first published Dec. 12, 2021.