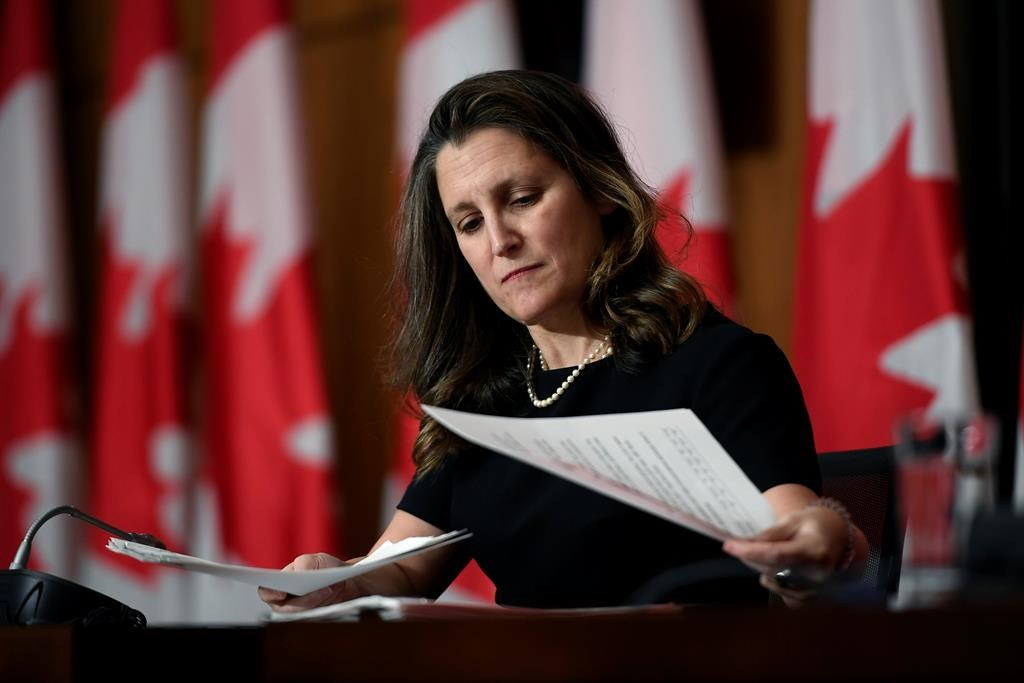 The Liberals have found themselves with a financial windfall amid an economic rebound, though the extra room is largely spoken for thanks to COVID-19 measures and relief for flooded British Columbia.

Finance Minister Chrystia Freeland’s update released Tuesday, which she delivered virtually due to COVID-19 concerns, shows that the deficit for this year is on track to hit $144.5 billion, below the government’s previous forecast of a $154.7 billion deficit.

The better-than-expected result is from billions in new tax revenues and higher oil prices that gave the government $38.5 billion in extra spending room.

But the update shows how quickly that extra room has been eaten up by $28.4 billion in new spending and previously promised spending since April’s federal budget.

Among the new measures are $5 billion to help B.C. rebuild after devastating flooding and $4.5 billion to respond to the Omicron variant of COVID-19, including looming measures at the border and benefits for workers subject to a lockdown.

There are millions more to improve ventilation in schools, libraries, hospitals and community centres, and a tax credit for companies that pay for upgrades.

There is also $742.4 million set aside to help some 200,000 low-income seniors recoup drops in the value of their guaranteed income supplement payments after they received emergency aid last year. The payments are not expected to go out until next May.

Freeland told reporters ahead of the document’s public release that Tuesday’s update wasn’t the master plan for the Canadian economy going forward. That is coming in next year’s budget, she said.

It is in next year's budget that the government could outline tens of billions of dollars in Liberal election pledges.

Robert Asselin, senior vice-president for policy at the Business Council of Canada, said there are several big expenses on the horizon that could strain federal books in the coming years without a big bump in economic growth.

That would include paying for those Liberal campaign promises, the transition to a green economy, higher health-care transfers to provinces, as well as any new wrinkle in the COVID-19 pandemic.

"They've provided the support that was needed both on businesses' side and on the income-support side," said Asselin, a former budget chief for the Trudeau Liberals.

"But they have also spent a lot of money … that is not COVID-related, and that will be hard to sustain over time without huge growth."

The economy has been on a roller-coaster ride since the onset of the pandemic, including a historic drop that sent the deficit in the last fiscal year to a record $327.7 billion.

That was lower than first thought because of higher tax revenues and after officials rejigged how much the government could pay out to First Nations children affected by the child welfare system. The government has now banked $40 billion — half for system improvements, and half to compensate victims.

After a recent upswing, the government now expects the economy to grow this year by 4.6 per cent.

While growth is faster than expected in the next two years, it is expected to come back down to pre-pandemic levels once the crisis passes, which Asselin said may not be enough to pay for the $78 billion in new spending the Liberals promised on the campaign trail.

The unemployment rate in November almost reached its pre-pandemic reading of 5.7 per cent in February 2020. The Finance Department expects the country to get back to that rate in 2023 under the revised outlook.

The outlook for inflation has also been revised up from the budget. The government now expects the consumer price index to increase 3.3 per cent this year, and 3.1 per next year, before coming back closer to the Bank of Canada's two-per-cent target in 2023.

"Supports to people are something we can't afford not to do. We have to put those in place," he said.

Conservative Leader Erin O'Toole accused the Liberals of ignoring the rising cost of living, saying that as prices increase, so too does the amount of taxes federal coffers pull in.

"Canadian family budgets are strained to the max and Mr. Trudeau is benefiting from inflation," O'Toole said.

And Bloc Québécois Leader Yves-François Blanchet chided the Trudeau Liberals for shutting the door on a provincial ask to increase health-care spending during, not after, the current health crisis.

Freeland had originally planned to deliver the update in person but made a cautionary change of plans after two members of her team had positive rapid antigen tests.

She told a virtual news conference the need to "drive economic growth and competitiveness" are imperative in a post-pandemic Canada.

"Climate change, housing, affordability, growth and competitiveness — these are things we are committed to working on," Freeland said.

"But this is not a budget. And it's not a mini-budget. Really, the intention here is a clear and transparent accounting of where the Canadian economy and Canadian finances are today."

This report by The Canadian Press was first published Dec. 14, 2021.

Note that fiscal "improvement" for a monetary sovereign (i.e. the federal gov't which wholly owns a central bank that issues a fiat, floating non-convertible currency) can only be determined by the effect on the economy, and not by balance sheet numbers:

For Overspending Governments, an Alternative View on Borrowing Versus Raising Taxes
Bloomberg

"Deficits, per se, are not disturbing," Kelton wrote in a September column for Bloomberg Opinion. "Is there a limit to how big the deficit can safely climb? Absolutely! Deficits matter. They can be too big -- risking accelerating inflation. But they can also be too small, robbing the economy of a critical source of income, sales and profits."

William Mitchell is Professor in Economics and Director of the Centre of Full Employment and Equity (CofFEE), University of Newcastle, NSW, Australia

"Forget the deficit. Forget the fiscal balance. Focus on what matters – employment, equity, environmental sustainability. And as we would soon see – the fiscal balance will just be whatever it is – a relatively uninteresting and irrelevant statistical artifact."

"The central idea is that government fiscal policy, its spending and taxing, its borrowing and repayment of loans, its issue of new money and its withdrawal of money, shall all be undertaken with an eye only to the results of these actions on the economy and not to any established traditional doctrine about what is sound and what is unsound. This principle of judging only by effects has been applied in many other fields of human activity, where it is known as the method of science opposed to scholasticism. The principle of judging fiscal measures by the way they work or function in the economy we may call Functional Finance … Government should adjust its rates of expenditure and taxation such that total spending in the economy is neither more nor less than that which is sufficient to purchase the full employment level of output at current prices. If this means there is a deficit, greater borrowing, “printing money,” etc., then these things in themselves are neither good nor bad, they are simply the means to the desired ends of full employment and price stability …"