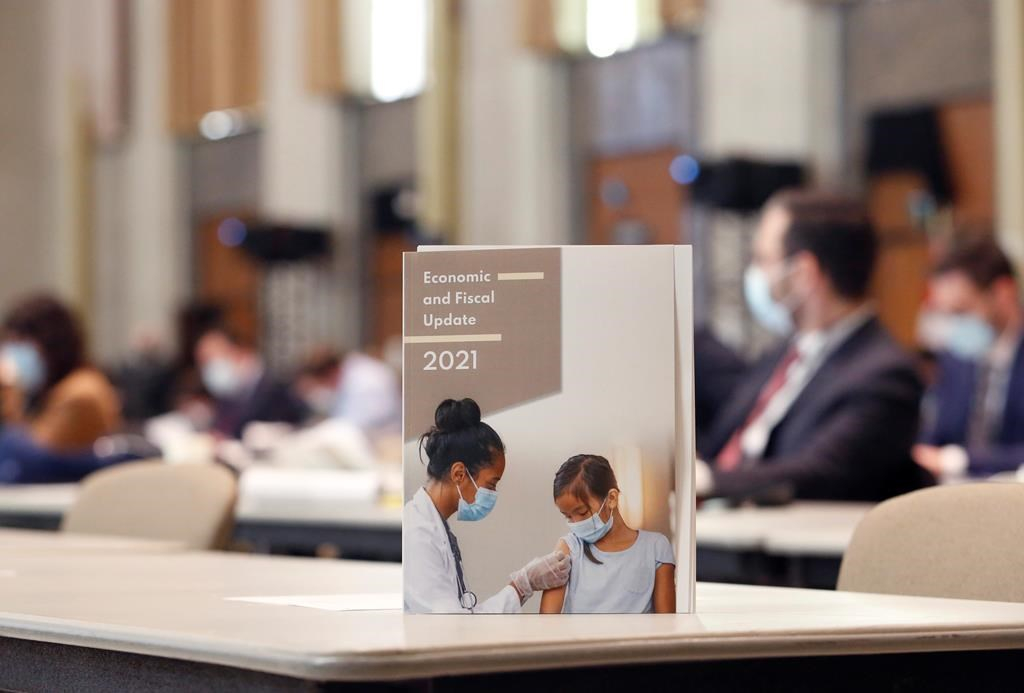 Chrystia Freeland speaks virtually at a press conference about the 2021 Economic and Fiscal Update as a copy of the update sits on a table during a lockup session in Ottawa on on December 14, 2021. Photo by The Canadian Press/Patrick Doyle
Previous story

Finance Minister Chrystia Freeland released a fall economic statement today that outlined a better-than-expected economic rebound, but also billions more in spending, including on the response to the Omicron variant of COVID-19.

Here are some other measures outlined in the fiscal update.

The federal government plans to put $85 million into plowing through massive backlogs in processing immigration applications starting in fiscal 2022-23.

The government acknowledged the pandemic dramatically slowed down the pace of processing immigration applications, and many resources were redirected to focus on bringing Afghans in crisis to Canada after the country fell to the Taliban.

Though Canada is set to meet its immigration target of 401,000 permanent residents this year, opposition parties have criticized the government for allowing the backlog to grow to 1.8 million applications.

The government said immigration is picking up, with the monthly average number of new permanent residents catching up to pre-pandemic levels.

The cost of resettling Afghan refugees in Canada is expected to be $1.3 billion over six years, starting in the current fiscal year, and $66.6 million in future years.

Many of those people will be women, children, religious and ethnic minorities fleeing the Taliban and people who supported Canada and its allies during their mission in Afghanistan.

The government has faced staunch criticism for being slow to get people out of the country. As of Dec. 8, only 5,485 Afghans have made it to Canada.

Parliamentarians voted last week to establish as special committee to look at efforts to evacuate people from the country.

The heavy rain that washed away major infrastructure in British Columbia earlier this year is also expected to put pressure on the government’s fiscal outlook. The province was hit with flooding, mudslides, landslides, and rock slides.

Early estimates for the federal share of the province’s recovery sits at $5 billion. Those costs fall under the Disaster Financial Assistance Arrangements, in addition to other costs related to the slew of natural disasters that have ravaged the West Coast this year.

The disasters have also hindered Canada’s supply chains, particularly through the Port of Vancouver, and are expected to have major economic impacts.

The government says the total economic cost of the floods will depend on how quickly trade links reopen, which supply chains can adapt, and whether the flow of goods can be rerouted. Provincial and federal officials are working on Canada’s first National Adaptation Strategy, but it is unlikely to be completed before the end of next year.

The government has pledged new supports for the live performance industry. The government-imposed gathering limits were a major blow to an industry that relies entirely on crowds. The fund is expected to help the tens of thousands of workers who rely on live performances.

The industry’s recovery has lagged in part because of the time it takes to finance, develop and rehearse live performances, which is at odds with the ebbs and flows of public health restrictions over the last two years.

In response, the government has pitched a temporary $60 million fund would roll out in the 2022 fiscal year to temporary fund sector-led proposals that would improve the economic, career and personal circumstances of workers in the performance sector.

Canadian Heritage will also get an extra $2.3 million to administer the fund.

The government announced a new program to return a portion of the proceeds from the carbon price to small- and medium-sized businesses to backstop provinces without its own carbon price program.

Currently rebates are sent to individual families in the provinces that pay the federal carbon price, while small businesses can apply to get some funding to help reduce their emissions.

The government expects to announce details early next year but has already earmarked $200 million for the program, which would benefit businesses in Alberta, Saskatchewan, Manitoba, and Ontario.

Teachers will soon be able to claim school supplies for at-home learning on their taxes and get an even bigger return this tax year. The government has proposed to increase its refundable tax credit for teachers from 15 per cent to 25 per cent, up to $1,000.

The change would also make sure that teachers can claim the supplies, whether they are used in the classroom or for remote learning.

The eligible list of supplies will now include electronic devices like graphing calculators, digital timers, and remote learning tools.

The expanded tax refund is expected to cost the government about $4 million in the 2021-2022 fiscal year, and $5 million every year thereafter.

This report by The Canadian Press was first published Dec. 14, 2021.